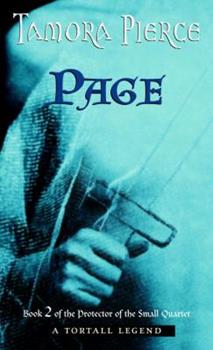 For use in schools and libraries only. The adventures of Keladry of Mindalen, daughter of nobles, begin with her service as a page and her efforts to prove herself to the males around her so to fulfill her dreams of becoming a knight.

Even better than the first volume

Published by Thriftbooks.com User , 22 years ago
"Page" the second book in "Protector of the Small" continues the story of Keladry of Mindalen, as she progresses in her studies as the first openly female page in Tortall. Now that her year of probation is over, Keladry is a full-fledged page. Unfortunately, the harassment hasn't stopped yet, but does slow down as she demonstrates her abilities again and again. Some new characters appear, Owen, a younger page with a strong case of hero worship, and Lalasa, a young palace servant whom Keladry hires to protect from ill-treatment. Nice to know Keladry hasn't slackened on her ongoing quest to protect those around her from bullies. One minor point: I still find myself wondering what happened to Princess Kalysin? Wasn't she going to become a knight? But, that aside, this is a terrific book, and one point, toward the end, nearly reduced me to tears! I look forward to Tamora Pierce's next offering.

Great and fabulous book with slight romance- a MUST read

Published by Thriftbooks.com User , 22 years ago
~*~ Well,all of you know the first book : Forst Test was great, but this was even better! Well... in Page, Kel grows not only into her body but also her feelings. She starts having these strange yet (to her) unexplainable feelings and emotions toward Neal (which i am saying FINALLY, Kel... what took you so long) =) Even so, Nealy doesn't notice =( and thinks of her as the greatest friend he has, and insted falls in love with others besides Daine... like Kel's SISTER! Kel hides her jealousy well but you can tell she's fighting hard to keep those strange and new feelings under control. *Sigh* I guess i am TOTALLY into the maybe in the future neal/kel relationship... going on, Cleon as we find out has a special reason to those flowery names he calls her cuz he has a crush on her... and i hate to admit it but he is sweet and kind to her. It also involves embarrassing moments for Kel such as when the boys are staring and making comments about her slightly grown breasts. *sigh* guys will never learn! the book also has slight talk about very light rape, and harassment. I think that Joren likes her since he's nicer to her, and was discussing marraige to her (no he DID NOT propose) and how she would be pretty if she lost some weight... , and want to be friends. She said she wouldn't want to marry anyways, but thinks secretly that if NEAL asked her she would say yes... but dismisses the issue in her mind. It still has the normal adventure and stuff with page turners so don't worry! It;s a must read! Starry wishes, ~*~*~*~* Tiffani*~*~*~*~* p.s i know you know that i am not one years old! =)

Published by Thriftbooks.com User , 22 years ago
Since I gave "First Test" 5 stars, I really need 6 for this one. It's even better! The second book in the Protector of the Small series, "Page" covers Keladry's last three years as a page in knighthood-training school. We meet several new characters: Lalasa, Kel's maid, whom Kel hires in order to protect her from ill treatment by others; Owen, the young page whose favorite word is "jolly"; and a new animal friend (in addition to Kel's cranky yet loyal horse, Peachblossom, and her helpful flock of sparrows), the faithful dog Jump. Kel continues to stand up to bullies and works to conquer her fear of heights. Her mysterious benefactor bestows more gifts on her. Keladry of Mindelan is an admirable and likable heroine, and in this book she shows her courage, resourcefulness and leadership ability. If you haven't read the two previous Tortallan series, The Song of the Lioness Quartet and The Immortals, don't delay! These are all well-written, exciting, fun fantasies that can be enjoyed by both young readers and grown-ups.

Tamora Pierce at her best

Published by Thriftbooks.com User , 22 years ago
This book was great. I love the order of events and surprises in it. Romantic allusions aside, Kel and her friends are growing by leaps and bounds. If you've read the other books refering to Tortall, you'll know the Knighthood has changed a lot, which is a good thing since everything needs to evolve once in a while...even the "Stump". This is a must read just like every other Pierce novel (which I've been obsessively reading since 10 years old, I'm 22 now). The plot is a little disjointed because the book is trying to fit in 3 years of growing up, but it is still easy to read. This series is different than Alanna because in that series a lot of the characters weren't dealing with the "knighthood" and "nobility" which this series seems to delve into whole-heartedly. It's different but it gives you insight into an amazing fictional world. LOVED IT. (and all the others)

Published by Thriftbooks.com User , 22 years ago
Although this book was a LITTLE all over the place, year wise, it was WONDERFUL! it tells of Kel's remaining years as a Page -- and what she has to STILL deal with. It was wonderful. I must admit I was always a kinda Neal+Kel person (like i wanted them to be together sometime in the future)... i'm not as much anymore. Cleon is really sweet to her (as you'll see when you read this book!) And JOREN'S surprising turn of events? I wasn't expecting that! Well, it's a REALLY good book and i'd suggest it to anyone!
Trustpilot
Copyright © 2022 Thriftbooks.com Terms of Use | Privacy Policy | Do Not Sell My Personal Information | Cookie Preferences | Accessibility Statement
ThriftBooks® and the ThriftBooks® logo are registered trademarks of Thrift Books Global, LLC