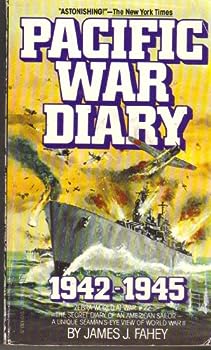 Fahey was a 24-year-old garbage-truck driver when he enlisted in the Navy on Oct. 3, 1942, and became a seaman first class on the USS Montpelier. During almost three years of battle in the Pacific... This description may be from another edition of this product.

Published by Thriftbooks.com User , 12 years ago
This is a very different book from With the Old Breed, and the literary ability of the author does not compare with Sledge, but nevertheless this book, although it reflects some of the drudgery of an enlisted man's life on a ship, I was amazed to find held my interest throughout. I well remember being told when I was at boot camp (in 1951) at Great Lakes that we were forbidden to keep a diary. In those days I did keep a diary but I never made an entry in it through the nine weeks of boot. One of the reasons was that there was no privacy and I am surprised that Fahey was able to do his diary consistently through the years. Another thing that struck me is that they used to say promotion in wartime was faster than in non-war situations, but Fahey never became a petty officer. A man who could write such an accurate account of his time had to have a lot on the ball and so one wonders why he never rose above seaman first class. This book is a real winner and I am wondering why I never heard of it until I read the biography of Justice Byron White and learned he felt that it was an accurate authentic account of war in the Pacific. Anyone who was in the Navy will appreciate this book, as will anyone who wants to know what wartime aboard ship was like.

Published by Thriftbooks.com User , 13 years ago
Pacific War Diary is the diary of James Fahey, an ordinary sailor from Waltham, Massachusetts, who served aboard the light cruiser Montpelier from the time it left the U.S. east coast in December 1942 until its return in December 1945. I first became aware of this diary when reading Paul Fussell's book Wartime, wherein Fussell uses many quotes from Fahey and numerous other firsthand accounts of WWII. Fahey's diary is highly educative in revealing what life was like for a U.S. sailor aboard a warship in the Pacific theater of WWII. Most of the entries involve standing watch, getting sleep whenever possible, letters from home and making do with whatever food is available. When not at sea, there are the constant work parties and unloading and loading supplies and ammunition. At battle stations, Fahey helped man 40 mm antiaircraft guns. There is a particularly gruesome account of the aftermath of a Japanese kamikaze attack where Japanese body parts litter the deck of Montpelier. As far as combat history, Fahey's account starts at the tail end of the Guadalcanal campaign at the Battle of Rennell Island. Then, the Montpelier participates in the slugging matches in the remainder of the Solomons: bombarding New Georgia, and at Bougainville, the brutal battle of Empress Augusta Bay. Finally, after the Solomons are secure and Rabaul is bypassed, Fahey and Montpelier join the task force invading Saipan, which also confronts the Japanese task force in the Battle of the Philippine Sea in June 1944. Later, Fahey and Montpelier participate in the Philippine campaigns of Leyte, Mindoro, Luzon, Corregidor, Palawan and last of all Balikpapan in Borneo. Fahey's experience of day-to-day routine, and even his participation in battles vary little from thousands of other sailors from WWII. The value of Pacific War Diary, therefore, lies in its uniqueness since there is to my knowledge no other published personal account of the war written by an ordinary seaman. The main reason for this is that diary keeping was banned and considered a security breach. Fahey even mentions once that he is probably the only sailor in the fleet keeping a diary. Whether you have a relative who served as a sailor in the Pacific in WWII, or are interested in a first-hand account of several of the important naval actions in the Pacific, I highly recommend Pacific War Diary.

Published by Thriftbooks.com User , 13 years ago
Having spent four years as an enlisted man in the U.S. Navy and eighteen months in the South Pacific this book brought back many memories. Of standing watches at all hours, the working parties, the heat, the comradship of my fellow shipmates and the many wonderful people I met while I was there. I don't know how Mr. Fahey managed to keep his diary fom being discovered for so long with all the security during the war but I'm glad he was able to. I think he described the action, hardship and horror of war extremely well. This book is by far my favorite war story of WW2.

Published by Thriftbooks.com User , 15 years ago
I, too, have a copy of the 1963 Avon paperback that I have been lugging all over the country for the past 30+ years. I read this in a high school history class in the early seventies, and immediately realized it was one of the best true war stories I had ever read. I have read my very tattered copy several more times since then, and have enjoyed it more with each reading. The book is the diary of a young seaman aboard the USS Montpelier during action in the Pacific from 1942 through 1945. He kept the diary a secret because it was against Navy regulations to keep such a document and it was only printed years after the war ended. Written in the language of a sailor, it is gritty and real. It does, at times become repetitive, but then again, life aboard a ship during the war was just that....days of sheer terror followed by weeks on endless boredom. Read this book if you want to get a great perspective of the war from a sailors point of view. And, just read it if you want a fantastic read!

An ordinary seaman tells his tale

Published by Thriftbooks.com User , 22 years ago
I picked up this book from my local library because my own father was an ordinary seaman in the WWII Pacific navy but refused to say more than a few words about it before he died over 25 years ago. He hated the food. He served in the Pacific near China at some time. But that's about all I know. In searching the net for books about the naval war in the Pacific this one popped up, and it was a revelation. It shatters the myth that serving in the navy meant three hot meals a day and sleeping on clean sheets and a soft mattress every night, not to mention getting any sleep at all. It also shatters the myth that serving in the navy was safe. I just cannot imagine being in a battle where I was literally surrounded by fighter planes, dive bombers, torpedo planes, and kamikazes from above. Then there were the 5 and 6 and even 8 inch guns from land, enemy warships on the sea, and subs under the surface.As as been said, Mr. Fahey is no Hemingway; but the further I got into his narrative the more it seemed that I was hearing my own father's words. I wasn't, unless of course it turns out that, by some miracle, he served on the U.S.S. Montpelier with Mr. Fahey. But in his straightforward prose he reflects the no nonsense approach my dad always took towards whatever came his way. Reading this book has obvously been a very personal experience for me. So I do highly reccommend this book for anyone whose father served in the navy during WWII but refused to talk about it. But I also give it 5 stars for anyone who just wants to know what the day to day life of a seaman was like during that time.
Trustpilot
Copyright © 2022 Thriftbooks.com Terms of Use | Privacy Policy | Do Not Sell My Personal Information | Cookie Preferences | Accessibility Statement
ThriftBooks® and the ThriftBooks® logo are registered trademarks of Thrift Books Global, LLC