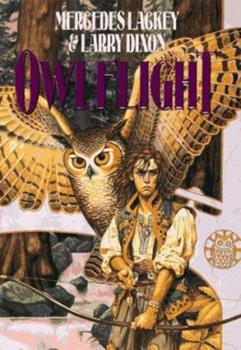 by Mercedes Lackey and Larry Dixon

This description may be from another edition of this product. Apprenticed to a venerable wizard when his hunter and trapper parents disappear into the forest never to be seen again, Darian is difficult and strong willed--much to the dismay of his kindly master....

Published by Thriftbooks.com User , 19 years ago
Owl Flight is the story of Darian, a precocious teenager, unwillingly apprenticed to mage Justyn after his parents (trappers) fail to return from one of their extended hunting trips. Resenting Justyn and believing him to be incompetent senile old man, Darian 'acts out' by running away and slacking off on his daily chores. This causes trouble with the local villagers who believe Darian does not act appropriately 'grateful for the charity they have given him. The hostile environment makes Darian wish he could run away from his problems and do as he pleases. Punished by his mentor, Justyn, for slacking off, he is sent into the woods one day to gather mushrooms, and his village is attacked by raiding barbarians. Darian is befriended by the Hawkbrothers (a tribalesque group of people), and forms a friendship with Snowfire, a Hawkbrother hunter/scout. Together with his newfound friends Darian must find a way to free the village of Errold's Grove from the ruthless clutches of the Bear Clan barbarians. While Darian's whining and self-pitying attitude can get annoying at times, I found Darian and his mentor Snowfire believable. I especially liked Snowfire and the other Hawkbrother characters and would like to learn more about him. I admit, I was pleased to read about a character that was not a herald, and it was nice to learn how some of the more provincial characters view things. I am anxiously looking forward to reading to picking up a copy of the sequel! Great Work MS. Lackey and Mr. Dixon!

Published by Thriftbooks.com User , 22 years ago
I loved this book. I am a major Mercedes Lackey fan and have read most of her books. I first started reading them when I saw one (The Lark and the Wren) on my sister's book shelf and from then on I was hooked. This book was much better than I expected. Her last trilogy The Mage Storms wasn't that great so I wasn't sure about this one untill I started reading and was snagged. I can't wait to read the next books Owlsight and Owlknight. Other books of hers that are cool are The Last Herald-Mage trilogy. I have read those books over and over. Her Bardic Voices and Bardic Choices books were good too, except for the last one Four and Twenty Blackbirds. I hope she keeps on writing her Valdemar books after this trilogy since I love them so much. If you are a Lackey fan you should also check out Tamora Pierce, Terry Goodkind, Robin Mckinley, Sherwood Smith, Andre Norton, Dennis McKiernan, or\and Ursala Le Guin books.

Published by Thriftbooks.com User , 23 years ago
This is without a doubt the best Mercedes Lackey book I have read yet. The story moves along at lightning speed (except for the first chapter, which moves rather slowly), and is full of action. Many of the characters are very likable in this book. The only one who I thought Lackey made you kind of feel nothing for was Starfall. But, aside from that, this book is a definite MUST READ for all Mercedes' fans!

Published by Thriftbooks.com User , 23 years ago
After reading all except the very first couple of the 'Valdemar Series' books, I've come 2 love the tales woven by Mercedes with or w/out her husband, Larry. This one is reminiscent of Arrows Flight, wherein 'younglings' come of age & learn how 2 maximize upon the use of their 'Gifts'. Although I'm not finished w/the book at this writing, I felt compelled 2 do so just on the pure enjoyment I'm having so far & the surety that it keeps on getting better until the very end. I sincerely hope Ms. Lackey will continue in this vein & look 4ward 2 the next one! This CAN'T be the end, can it???!!!???

This is a great ending to a GREAT series!

Published by Thriftbooks.com User , 23 years ago
I loved this book. Every minute I could, after school, in school, whenever, I was reading that book. I loved Darian's ways. I felt sorry for him, but in awe of the way his life turned out. He lived in a world that we can only daydream about but would love to live. He had gone through so much trama and yet took things the way they were. Then being picked on for being the typical teenage rebel. He was gifted with magical powers that only came as a curse to him. He was a major hero for the village kids, but he just wanted to fit in. He lived the life of a hurt loner, that was followed by bad happenings. If you have ever suffered loss of a loved one, you can almost relate to Darian. All I can say is that I wish that Mercedes Lackey would continue to make books of Valdemar or the Hawkbrothers. When I finished the last of the series, it was like a great loss and I felt a great feeling of sadness. I still do. I just wish it wasn't there, and I could be curled up in my chair instead. With a book about Valdemar.
Copyright © 2020 Thriftbooks.com Terms of Use | Privacy Policy | Do Not Sell My Personal Information | Accessibility Statement
ThriftBooks® and the ThriftBooks® logo are registered trademarks of Thrift Books Global, LLC