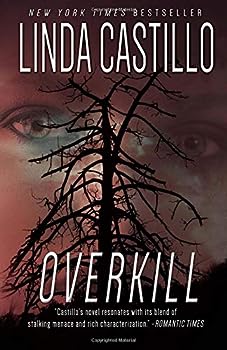 This description may be from another edition of this product. It started with a case so horrific that it sent Chicago cop Marty Hogan straight over the edge. Unable to put her disturbing memories behind her, Marty lost her job and was forced to flee to...

Published by Thriftbooks.com User , 12 years ago
In OVERKILL, Linda Castillo creates a compelling storyline driven by strong characters readers quickly come to care about. This is a book that proves difficult to put down, especially with a no-nonsense, delightfully complicated heroine like Marty. We are rooting for her from beginning to end, and it doesn't hurt to see her pursued by a hot hero like Clay! Good work Linda, look forward to more.

Published by Thriftbooks.com User , 13 years ago
Linda Castillo has hit another homerun!! From the very beginning this book fills you with intrigue and suspense. Once you begin reading, you cannot put it down until it's complete. Ms. Castillo is an excellent story writer who has put together a great story of committment to the "cause" and romance. The characters come alive and she makes you feel as if you know them personally. Read this book. You won't be disappointed.

Published by Thriftbooks.com User , 13 years ago
Marty Hogan was a good cop, one of Chicago's finest, until the day a horrific murderer pushed her over the edge. That day, Marty not only lost her job she had worked so hard for but incurred the wrath of the murderer's relatives who were out to exact revenge. Having such a marked reputation Marty was lucky to find work in a small town in Texas, from Clay Settlemeyer, a police chief who believed in second chances. What Clay wasn't looking for was the attraction he felt towards the feisty curly headed officer carrying a huge load of baggage. But when Marty's ex-partner was brutally murdered, evidence started to unravel indicating Marty was next on a vicious killer's hit list. *** I have two words that are wholly indicative to describe the impact of this story - whew and wow! Castillo has the reputation of writing some powerfully passionate and thrilling romantic suspense novels, and the imagery she captured in OVERKILL definitely held me spellbound. Marty was a multifaceted heroine who had lost it after she witnessed the horror of what had happened to a nine year old child who had been raped and murdered by a sadistic monster. Her reaction was over the top, but (IMHO) in most peoples minds the beating she gave the man in custody was no more than what he deserved. The aftermath of her actions and how Marty reacted to it, making her hard as nails with a soft heart helped in creating this memorable heroine as well as creating a totally believable plot line. Clay was a perfect match for Marty a survivor of the war in Iraq, he knew the signs of PTSD having been there himself and recognized them in her. Although, he believed in second chances he worried that he'd made a mistake in giving Marty a chance, when she called in an ambush that his department couldn't see any signs of. Castillo played on the budding attraction as news of Marty's ex-partner's bizarre murder came to light and other attempts on her life continued, the pieces came together. Clay knew anyone near Marty could be in danger when they understood it was coming from the Russian mafia. Working on Clay's dilemma, the author played his passion for Marty and keeping her safe, while he attempted to protect his cherished daughter at the same time. The tension and suspense held up remarkably well through the entire story making this a very fast paced book that was hard to put down. Marty, Clay, and the cast of memorable secondary characters all add up to making this one powerful story with thrills and chills aplenty! Marilyn Rondeau, for www.ck2skwipsandkritiques.com

Published by Thriftbooks.com User , 14 years ago
Giving in to rage cost Marty Hogan her career and ultimately forced her to relocate to a nothing town in the Texas panhandle to find work as a policewoman. Her tough as nails attitude is impressive to her new boss, Clay Settlemeyer, and he's had enough regrets to be willing to give her a second chance. Yet, bad news combined with incidents that look somewhat fishy make him wonder if the lady has PTSD. When the truth comes out, that the Russian mafia is out for her blood, terror will reign over their lives until justice is served. **** Even without the minimalist love story, this would be a blazingly fast paced story guaranteed to satisfy your need for vicarious thrills. Marty is an unusual, take no prisoners, both tough and soft heroine who makes herself memorable not only to Clay, but to readers who wish for half her backbone. **** Amanda Killgore

Published by Thriftbooks.com User , 14 years ago
I enjoyed this book but it was abit slow in the middle. The beginning was great and so was the ending, but bogged a little in the middle. I am glad I stayed with it because it really was good. Marty Hogan is a burnt out cop from Chicago. She lost it on video, with a child killer. She beat him almost to death and she is a small woman. But the fallout aka Rodney King, cost her the job and her reputation. Now the only one who will hire her is a small town PD in Texas. Chief Clay Settlemeyer has been there himself, and without a second chance he wouldn't have made it either. So he takes a chance on an unknown cop. He knows the rest of the story, about the killing of the child. However, he doesn't expect to be attracted to Marty who is suffering from PDST. He has a young daughter to raise. Marty tries to settle in but shortly is notified that her partner in Chicago has been murdered. She doesn't connect it to herself until almost to late. She is shot at and almost kiddnapped before the pieces start to come togather. The story held my attention and as I said the beginning and the end were great.
Copyright © 2020 Thriftbooks.com Terms of Use | Privacy Policy | Do Not Sell My Personal Information | Accessibility Statement
ThriftBooks® and the ThriftBooks® logo are registered trademarks of Thrift Books Global, LLC