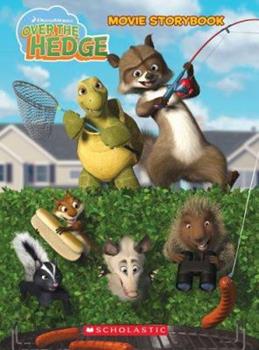 Over the Hedge Movie Storybook

When Verne the turtle and his woodland friends wake up from their hibernation, they find a suburban neighborhood encroaching on their forest home, Verne's first instinct is to retreat into his shell and leave, but then he meets R.J., a con-artist racoon. R.J. views suburbia as a treasure trove of goodies waiting to be discovered. And since he owes a very angry bear a lot of food, the opportunity is to good to pass up -- especially if he can convince...

Published by Thriftbooks.com User , 14 years ago
My 4 Yr old Grandson hasn't put this book down. A good buy .

Published by Thriftbooks.com User , 15 years ago
Sarah Durkee, a master of writing books based on television and film, turns in another pleasing movie storybook. The "Over the Hedge Movie Storybook" tells the story of the film, in which a raccoon named R.J. finds himself in a big trouble with a bear. Now he must recruit the help of a group of animals and try to convince them that nabbing human food (and even technology) is the "gateway to the good life." As an illustrated picture book, probably aimed at somewhat younger readers, the story is necessarily somewhat simplified. If anything, they thing I miss most is some of the development of R.J., which doesn't quite seem to come through in this version. Still, enough of the humor of the film is maintained, both in the illustrations and the book's text to make this storybook exactly what it should be. In case you were wondering, though this book features a photo of the characters from the film on the cover, the rest of the book is illustrated in an original style by Pete Emslie with the help of Koelsch Studios. This is not necessarily a bad thing --- it can be fun sometimes to see a different illustration style and the somewhat anime / comic look adds a nice touch to this storybook. I think fans of any age of "Over the Hedge" will enjoy this telling of the story, even if it is rather simplified.

Published by Thriftbooks.com User , 16 years ago
While this book is not as good as the movie, it is still mega fun to read!
Trustpilot
Copyright © 2022 Thriftbooks.com Terms of Use | Privacy Policy | Do Not Sell My Personal Information | Cookie Preferences | Accessibility Statement
ThriftBooks® and the ThriftBooks® logo are registered trademarks of Thrift Books Global, LLC