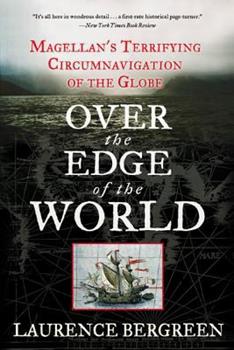 Over the Edge of the World: Magellan's Terrifying Circumnavigation of the Globe

The riveting story of Ferdinand Magellan's historic 60,000-mile ocean voyage--now updated with a new introduction commemorating the 500th anniversary of his journey. "Prodigious research, sure-footed prose and vivid descriptions make for a thoroughly satisfying account... it is all here in the wondrous detail, a first-rate historical page turner."-- New York Times Book Review Ferdinand Magellan's daring circumnavigation of the globe in the sixteenth...

Published by CDoherty1000 , 3 years ago
Great book, makes you feel like your there.

Published by Thriftbooks.com User , 19 years ago
I loved this book.The amazing story of Magellan's circumnavigation of the world practically writes itself, especially with access to the journals of Antonio Pigafetta, a Venetian "passenger". The key for any author is not muck up this incredible story. Bergreen succeeds wonderfully by offering a smooth read. The books 400 plus pages fly by. Bergreen seemingly omits nothing and, the journey is here in all its gory, exciting, repellent, horrifying, shocking, wondrous, cruel, beautiful, nerve-wracking, spine-tingling detail.Bergreen presents about as clear a picture of Magellan the man as possible from nearly 500 years away. The reader is left to admire his leadership and navigational skills and lament his capriciousness and hubris.Coming on the heels of the vastly overrated Columbus journeys, Magellan's expedition was to prove equally significant, though more calculated and replete with many, many more adventures and tragedies.A scant few of the original crew and only one of the five ships completed the journey. Along the way there were horrendous storms, mutinies, executions, horrible accidents, illness (scurvy in particular) and all manner of encounters with natives. These encounters could lead to everything from feasts and orgies to murder and dismemberment.Bergreen does a wonderful job of framing the story within the perspective of the times and the religious, political and social climates.To me the real hero of the journey emerges in the person of Pigafetta who did a superlative of chronicling the adventure. His must be some of the most thoughtful and thorough journals of their times.Bergreen's book does him and Magellan's journey justice.

Published by Thriftbooks.com User , 19 years ago
Does a history book have this much right to be a fun page-turner? Yes, and Laurence Bergreen exceeds to great story telling, marvelous adventure, creating a just plain enjoyable read. Taken either as history or read like a novel this is an amazingly detailed telling of three year voyage which ended in 1522 with only one ship and 18 survivors out of the original five ships and 260 who left Spain with this Portuguese Captain. Even the early chapters, which tell how a Portuguese ends up leading the Spanish fleet, is a marvelous story. But in the end, what stays with you is the shear terror, boredom, disease, and strange island customs all left for us to enjoy because of basically one man, Antonio Pigafetta who was taken on to chronicle the voyage and some how managed to survive mutiny, the voyage through the strait, the native peoples defense of their territories (which resulted in the death of Magellan himself), and in the end being cast aside for a more "official version". Bergreen could not have told his story without Pigafetta and Pigafetta could not have found a better writer to bring his story to a modern audience. I highly recommend this great read!

Published by Thriftbooks.com User , 19 years ago
Historical achievement is, of course, about people. So no matter when it occurs, achievement is driven by technology, greed, politics, ambition, mistakes, courage, religion, culture, sexuality, and even diet. Good History is as much as about explaining the context of achievement, as it is about detailing facts. This is good History -- and it's a great read.For most of us, the facts about Magellan have been boiled down to Spanish galleons, funny helmets, and the first circumnavigation of the globe. Bergreen recovers the context to tell a story of a religious man, driven by vision, ambition, and personal slight. Along the way he explains the strategic urgency of Magellan's quest and details the logistics of undertaking the voyage. He helps us understand why cloves, cinnamon, and nutmeg were matters of national security to sixteenth century Europeans. Bergreen leaves us with no doubt that Magellan was courageous. His Magellan is not evil, though the evils of the Age of Exploration are already evident in him and his men. As in other tellings, Magellan's death on the beach at Cebu is an obvious metaphor for the collision of East and West, but Bergreen leaves it to others to belabor the notion. He's much more interested in describing the local politics that set the scene for the tragedy. With such rich detail and engaging writing, the story of Magellan comes to life as a vivid adventure and an enlightening history.

Published by Thriftbooks.com User , 19 years ago
Why couldn't they have used books like this as history textbooks back when I was in high school? All I was taught back then was that Magellan's expedition was the first to circumnavigate the globe (even though he himself died along the way); that the voyage took 3 years; and that although Magellan was from Portugal, he sailed for Spain. Here's some of the good stuff they left out (but which Mr. Bergreen includes): Magellan tried to get King Manuel of Portugal to finance the expedition. Magellan didn't have any luck. (Not surprising, since the explorer already had "a history" with the king, and the king didn't like him.) What could have been the last straw for Magellan was when, after an audience with the king, Magellan tried to kiss the king's hand (as was customary). The king withdrew his hand and wouldn't allow Magellan to kiss it. Magellan finally decided to give Manuel the kiss-off, went to Charles I of Spain, and had better luck. Charles was quite interested in the potential profits from the spice trade. (He was broke after borrowing a wad of money from the Fugger family. The reason he borrowed the money? He had to pay a lot of bribes to the electors who were going to decide who the next Holy Roman Emperor was going to be. Charles wanted the position even though, as Voltaire later said, the Holy Roman Empire wasn't holy, wasn't Roman, and wasn't an empire.) Manuel of Portugal was quite upset with Magellan for offering his services to Spain, especially because he brought secret Portuguese navigational charts with him (which Mr. Bergreen explains would be equivalent to the theft of nuclear secrets during the Cold War). Manuel sent an envoy to Spain to try and talk Magellan out of the trip. When that didn't work, the envoy bad-mouthed Magellan to Charles I. That didn't work either. After Magellan sailed, Manuel really got mad: he sent some thugs to harass Magellan's family and to vandalize the family home. For good measure, excrement was smeared on the Magellan escutcheon. Manuel also sent out his own expedition to try to catch up with, and stop, Magellan. I guess you could say the king was a sore loser. Anyway, this all takes place in the beginning of the story. Things get better after that. (For example, we learn that Charles I's mother was called Juana the Mad. One reason for this just could have been that for several years Juana kept the remains of her late husband, Philip the Handsome, next to her bed. She expected him to come back to life and wanted him in a convenient spot. After Philip's death Juana also insisted on only dressing in black and she refused to bathe.) The book is chock full of 16th century realpolitik, mutinies, torture, natural history, as well as information on spices and the erotic practices of various Pacific Islanders. We also get to read some interesting material about the 15th century Chinese Treasure Fleets. Mr. Bergreen is obviously a big Magellan fan, but he doesn't put the great navigator's faults below deck - M

Published by Thriftbooks.com User , 19 years ago
Laurence Bergreen provides a deep look at Portuguese navigator Ferdinand Magellan's sixteenth century quest that led to the first known navigation of the world. This journey is a pivotal point in how Europeans viewed the world as people realized that not only will one not fall off the globe, but that Europe is not the epicenter of the orb. Mr. Bergreen followed the ill-fated journey through what is now the Straits of Magellan at the tip of South America and uses satellite images to further enhance the trek. Of interest to historical buffs is the daily journal that encompasses known research from around the globe. This includes sailor Albo's log and the comments of scholar sailor Pigafetta. The author debunks several modern day myths such as Magellan's mission was not go around the world, but to find a water route to the Spice Islands; and that the voyage was not glorious but brutal and filled with tragedy and misfortunes including the Captain having died in the Philippines. Magellan never made it. The trek took three years with only one ship with eighteen survivors making it back to Spain.This is a great account of one of the legendary journeys of history. Supplemented by maps, inserts, and first hand accounts, readers join on the harrowing trek that proved once and for all that the world is round. No one will feel over the edge with this great look at the "Terrifying Circumnavigation of the Globe" by Magellan and his crew.Harriet Klausner
Trustpilot
Copyright © 2022 Thriftbooks.com Terms of Use | Privacy Policy | Do Not Sell My Personal Information | Cookie Preferences | Accessibility Statement
ThriftBooks® and the ThriftBooks® logo are registered trademarks of Thrift Books Global, LLC