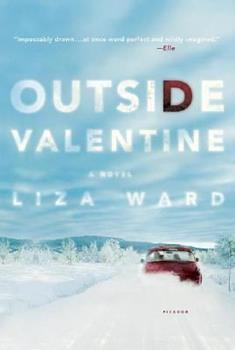 Outside Valentine: A Novel

Liza Ward's spellbinding first novel is told from the very different points of view of three narrators mysteriously linked by a shocking crime and their efforts to heal the past. Based on the Charles Starkweather and Caril Ann Fugate murders in Nebraska in the 1950s, Outside Valentine examines the effects of violence and the power of love as the three voices interweave and show the lingering and devastating aftershocks of murder across three generations...

Published by Thriftbooks.com User , 16 years ago
I was the fiction editor at AGNI literary magazine when an excerpt from Liza Ward's OUTSIDE VALENTINE crossed my desk--a Caril Ann Fugate chapter--and it raised the goosebumps on my arms that signify a rare and unusual talent. I told my senior editor that we had to snap it up right away, and he agreed. We were too late with that Caril Ann chapter, but Ms. Ward subseqently favored us with another, which we published. I was delighted to see the novel come out and receive the excellent reviews it certainly deserves. Caril Ann in particular, with her extraordinary diction and painful wistfulness, is a marvel of a character, and the atmosphere in the novel, its interplay of light and dark, beauty and fear, will haunt me for a long time. Ward's depictions of the Starkweather murders, particularly those that occur in the Bowman house, are rivaled only by Flannery O'Connor's in A Good Man Is Hard To Find. I will be eagerly awaiting her next novel.

a novel worth reading

Published by Thriftbooks.com User , 17 years ago
I am fascinated by the author's technique of using three voices to tell this story, and how they all come together by the end of the book. Each voice evokes the flavor of his or her era. A very talented author has shared a book with us. I hope she will share more. I do have one bit of advice to you, if you should read this wonderful book.....In the first few chapters, take note of the years....this is a story told by three people, in different times. Get to know them. Thanks, Liza Ward, for your book.

Published by Thriftbooks.com User , 17 years ago
This uniquely absorbing debut novel richochets through generations revealing the engrossing tale of the Starkweather murders; our country's first teenage serial killers. Even true crime buffs will find this a must read as the author is the granddaughter of two of the victims. Ward has the haunting perspective that can only be had through a lifetime of introspection trying to understand the incomprehensible. Her fine pitch and uncanny insight leave the reader waiting for more. Every character in this novel stands on its own but together they are a rich reveal of how actions can reverberate through the ages; leaving a wake of despair, destruction and, ultimately, redemption. Excellent.

OUTSIDE VALENTINE - A LITERARY TRIUMPH

Published by Thriftbooks.com User , 17 years ago
Outside Valentine was the first book read in my book club and it is still the hands-down favorite. First time novelist Liza Ward manages to weave 3 very disparate narrative voices together to create a tapestry of a family tradgedy and how it continued to effect people and places. The writing is chilling, luminous, and succinct. That the material is based on real events that happened in the novelist's life adds a deeper layer of intensity to an already riveting novel. I can't wait for her next work! Bravo!

Powerful and poignant telling of a tragic story

Published by Thriftbooks.com User , 17 years ago
In 1957, Charlie Starkweather and his girlfriend Caril Ann Fugate went on a killing rampage, making the dark days of a brutally cold winter even darker. For days, they gripped the Midwest with a tangible fear. Charlie claimed that everything he did was for Caril Ann. She claimed that she did nothing wrong. Whatever their motives, their actions took the lives of many, changed many more, and touched almost everyone across the country in one way or another. OUTSIDE VALENTINE is a tale written from three very disparate perspectives. Related at different points in time, the whole awful story of the bloody trail left in Starkweather's wake takes on dimension. It could scarcely be told in a better way. Liza Ward gives us a feel for the survivors' deepest thoughts, Caril Ann's insistent self-acquittal, and the appalling thrill that we get when we hear of such a shocking horror, deftly illustrating how we allow ourselves to lionize the monsters capable of unthinkably horrific crimes. Caril Ann was 14 when Charlie found her in his tree house. That day sealed the fate of nearly a dozen people, whose only fault was being in the wrong place when she and Starkweather passed into their lives. The couple indulged their hatred, leaving a path of death and broken futures. A quote attributed to Charlie says it all: "The more I look at people, the more I hate them." Five years after the murders, Puggy, a teenaged girl abandoned by her mother, finds herself obsessing over the story of Charlie and Caril Ann. She has built the two lovers into legendary figures in her mind. Secretly, she wishes for someone to love her the way Charlie loved Caril Ann. In a sense, she admires them --- until the reality of their mindless cruelty sinks in. One of Puggy's schoolmates lives next door to Lowell Bowman, who was away at boarding school when Starkweather and Fugate broke into the family home and killed his mom, dad, maid and dog. Puggy is transfixed by this brooding young man, claiming that she loves him even before she meets him. It becomes her goal to win his heart and hear the gruesome story of his parents' last hours. Nineteen years further on, Lowell is still struggling to regain a normal life. He has pushed his wife away and never got close to his children, retreating to the easy comfort of liquor. He cares --- there is no doubt about that. He wants to reach out, but he fears Starkweather and Fugate destroyed a part of him, along with his family. And he wonders if he can ever get it back. The author has a personal investment in this story. She lost her grandparents to the murderous pair nearly half a century ago. It is that very closeness to the crimes that gives Liza Ward's writing such power and poignancy. At one point, Caril Ann muses, "When I am half asleep and everything is dark, ghosts rise out of the prairie and swim across my eyes. The girl crawls up from the storm cellar with glass in her knee." It almost sounds like she has regrets. If Ward can make us care f
Copyright © 2022 Thriftbooks.com Terms of Use | Privacy Policy | Do Not Sell My Personal Information | Accessibility Statement
ThriftBooks® and the ThriftBooks® logo are registered trademarks of Thrift Books Global, LLC