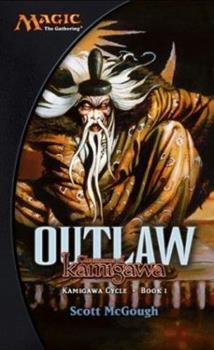 The first title in a series that peers into a mysterious new area of the Magic world.Outlaw: Champions of Kamigawa kicks off a series that will explore a new and mysterious area of the Magic: The Gathering world that fans have never seen before. This novel previews the newest trading card game set to be released in October, giving fans a sneak peek at the new elements of the game.

Published by Thriftbooks.com User , 14 years ago
Outlaw: Champions of Kamigawa By: Scott McGough Well, first off, I'll say this; this is another cycle that needs that better editing. It is rather annoying to get going and then have to stop and re-read something a couple of times to understand it. Now with that out of the way, I'll get on to the book. The Kamigawa cycle takes place in an era that shows a likeness to the days of Feudal Japan. It's like something right out of a samurai movie, it really is quite cool. Outlaw tells the story of the the beginning of the Kami war, a war involving the creatures of the spirit world and the people of Kamigawa in a brutal and bloody battle that constantly wages on. This book introduces the Princess Michiko. Michiko is the daughter of the ruler of Kamigawa, Daimyo Konda, who is born on the night that the war started. Michiko finally tires of being shut in her father's tower and unable to do anything about the war, she soon decides to leave the tower to seek Minamo Academy to study the library to try to find some answers to solve the troubles of the land. During her journey, Michiko encounters a thief and a very tall and menacing monk who are on a mission of their own. And both parties are soon engaged in a fight for their lives against the orochi, a race of snake-like creatures that keep to themselves and immediately attacks/kills anyone who treads on their territory. The thief, Toshi, is a mysterious character with agendas of his own that are known only to him. Soon, the paths of Toshi and Michiko become intertwined while Toshi remains the mysterious stranger, only popping in and out when he is needed or when he has a plan that suits his own needs. All the while, Michiko's goal is clear, to find the answers to the Kami War and put a stop to it before everyone in the land is wiped off the face of Kamigawa. I love this cycle, I love the characters and the weapons, and the monsters that are thrown into the world of Kamigawa. The types of magic are quite interesting, especially Toshi's kanji magic. MTG fans whould love this cycle, but try their best to ignore the poor editing job. I give this book a 10/10. It's a great book and hopefully the rest of the cycle is just as interesting as this one.

Published by Thriftbooks.com User , 16 years ago
Outlaw was a good book to thoose who know about MAGIC. If you don't you will not understand the plot as well and what is going on. I liked the book because it sucked you in and once you got into it you would forget about everything else. The characters and setting were described very well. The best part of the book for me was the giant battle in the end when Toshi and Michiko are in the cave. It was good because the description of what was going on and you wondered if they would make it out. You cared for Toshi when he was being squeezed and when he almost stabbed Michiko. The most vivd parts of the book was the characters and the climax. The characters were described so well you can see their face and how they dressed.The climax of the battle was good since you could see the Orchi charging out of the woods and the priests on the hill. Overall I thought this was a great book.

Thank you Scott McGough for writing another MTG book.

Published by Thriftbooks.com User , 16 years ago
For those that don't play Magic The Gathering or understand how the books help define a set of cards, this might not make sense. For those that do, this book is wonderful. I was so dissapointed with the books after Chainer's Torment that I stopped reading them altogether after starting Onslaught. I would like some advice if I should go out and buy the Mirrodin series now that Scott has restored my faith in the possibilities of MTG books. Outlaw kept me so invloved I was sneaking around with the book reading it at every possible moment. I agree with the first reviewer in that typos are abundant and silly. If the book was read through completely by an editor, fire that person immediately. I disagree with the second reviewer. This book certainly has a unique twist on the traditional story line of ruler abusing power and child setting things to right. A writer needs to use the basic themes that are available to him in a case like this, but in developing new systems of magic and aprenticeship while creating a purpose for the Kami wars and the characters in this story, he did a fantastic job. At times I felt like Toshi was a bit too powerful, but then I remeber what became of Khamal in the Odyssey series and he too became godlike; although it took three and a half stories to attain that level of power. I for one, am excited to see what level of power Michiko attains in the next novel and how Toshi uses his new found matriarch. Keep em coming Scott.

Published by Thriftbooks.com User , 17 years ago
As a Magic addict, I love reading the background stories and lore lurking behind the cards. I've gone Samurai-crazy with the recent release of "Champions of Kamigawa," and I went out on street release day to buy a fat pack of the new set (tournament pack, 3 boosters, this novel, etc. in one package). Kamigawa presents an awesome new setting for Magic, and /Outlaw/ in turn serves as a great introduction to this setting and its major players. The story has a good flow to it and is filled with well developed characters from the various races. The stage is nicely set for the Kamigawa War, and it really is exciting to read the book and see how all the races and spells in the new card set fit together. I really want to give this book a full 5 stars, but I can't for one very simple reason - the editing in this novel is abysmal. It's inevitable that any book of significant length will contain a typographical error or three. However, there are far too many ridiculously simple screw ups in this book. The biggest offenders were mismatched quotation marks and improperly placed commas. Also, many words are used improperly or are obviously the result of overzealous use of the "replace" button on a spell checker. It's clear that there was no independent reading done on this book before it went to press. Any competent reader would have spotted most of these errors just in a casual read through. /Outlaw/ is a great book that provides a solid background for the Champions of Kamigawa set. If you can ignore the disturbingly frequent editing errors, you will be rewarded with a very enjoyable time exploring the world of Kamigawa. Despite being marred by the absence of good editing, this is a story well worth reading.
Copyright © 2020 Thriftbooks.com Terms of Use | Privacy Policy | Do Not Sell My Personal Information | Accessibility Statement
ThriftBooks® and the ThriftBooks® logo are registered trademarks of Thrift Books Global, LLC