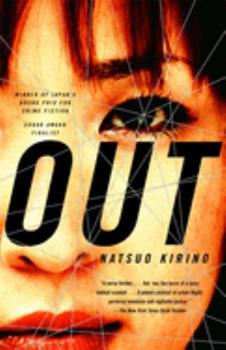 Winner of Japan's Grand Prix for Crime Fiction - Edgar Award Finalist - Nothing in Japanese literature prepares us for the stark, tension-filled, plot-driven realism of Natsuo Kirino's award-winning literary mystery Out. This mesmerizing novel tells the story of a brutal murder in the staid Tokyo suburbs, as a young mother who works the night shift making boxed lunches strangles her abusive husband and then seeks the help of her coworkers to dispose...

This book made me want to start reading again

Published by impulsive artichoke , 1 year ago
I’ve been not feeling like starting any of the new books I bought for a few years. This book made my passion ignite again! It’s a wonderfully written story, just enough suspense and diffère events happening for my short attention span. It was hard to put down. I regret putting it down after only reading 17 pages a couple of years ago. Very nice thriller.

Best of her Translated!

Published by Phillip , 4 years ago
I won't go into too much detail without ruining it but there's a lot going on in this book and it kept me up all night and I had to finish it to find out what happened as soon as possible! It's a family drama, a murder mystery, a gore fest and a fast paced thriller all wrapped up into one. Basically a woman and her friends take up making extra money by dismembering and disposing of dead bodies but it quickly becomes dangerous. The last night I finished the book, I woke up having a horrible nightmare from the last few pages of the book. I literally woke up screaming in a sweat because of how real this book felt and it still haunts me today and I read it 2 years ago! After I read OUT I immediately bought Grotesque and Real World. Out will make you angry, sad, possibly want to throw up but it also belongs in your collection. And yes im normally all over the place like my review :) happy reading

Published by Thriftbooks.com User , 17 years ago
Four women, co-workers on the night shift at a box lunch factory on the outskirts of Tokyo, form an unlikely friendship based on their mutual desperation -a dissatisfaction with their inattentive, unresponsive husbands and disaffected children, strained economic situations and emotional isolation. When Yayoi Yamamoto, a young wife and mother kills her abusive, philandering spouse, the four come together voluntarily to perform a most grisly act. They dismember the body to facilitate disposal. Although of disparate ages and characters, the women become quite bound to one another through an increasing web of conspiracy, self-interest and suspicion. A series of indiscretions and careless mistakes expose them all to unforeseeable dangers. "Out" is so much more than a psychological thriller or a formulaic crime novel. This is fiction that surpasses genre. Although plot driven, much of the story is dependent on character development and change. The characters are portrayed so vividly, even the minor ones, that the reader cannot help but form a strong attachment to them. It really does not matter, ultimately, if the connection is positive or not - one still looks forward to following the various personages forward to their individual destinies. Masako Katori, shrewd and extremely intelligent, is the definite leader among the women and an absolutely fascinating figure. Although she has perfected a cold, detached veneer with which she presents herself to the world, inside she is despondent and in turmoil. Increasingly alone and alienated from her husband and teenage son, she longs for "freedom." "It had started with something in her. Her hopelessness and a longing for freedom had brought her to this point." Masako is looking for a way "out" of her claustrophobic life. This is definitely a novel noir, with a substantial dose of S & M thrown into the mix. obviously not for the faint of heart. I became absorbed in the story almost instantly, only to have my interest wane after the murder is committed. My attention span was at fault here, not the author's writing. Fortunately I stayed with it because the second half of the novel is even better than the first, I think - really riveting! This is some of the best and most unusual writing I have encountered in some time. It is also very disturbing. Since I do not speak Japanese I can only judge by the translation, and for me the stark, gritty prose really accentuates the building tension in the narrative and the oppressiveness of the environment. I found myself thinking about "Out" long after I had turned the last page. Ms. Natsuo provides a rare glimpse into the bleak subculture of many lower middle class Japanese workers who live on the margins of society, worlds away from the lights and glitter of Tokyo's Ginza district. Readers also gain access to the grim Japanese underworld. I should note that there is wonderful dark humor throughout to alleviate the oppressive quality of the storyline. Althoug

Published by Thriftbooks.com User , 17 years ago
You may want to avoid eating before or while reading this thriller. Aside from that caveat, the only other recommendation is to set aside two days because you will not be able to put "Out" down. It draws in the reader with its letter-perfect character descriptions and tightly-constructed plot. Kirino's novel was originally published in Japanese under the same title in 1997. It was a cause celebre selling 300,000 copies and won Japan's top mystery award in 1998. Prior to that, Kirino won the Naoki Prize with "Yawarakana Hoho" (Tender Cheeks). This hard-boiled novel examines the interrelationships between four women factory workers, who are drawn into covering up the murder one of them commits. This leads to more intrigue and, ultimately, the central premise of the novel: what would you do in similar circumstances? Would you reject a friend's entreaty? If yes, why and how? If no, could you take part in the horror--and then go back to your previous life? The main character is the brilliant but ordinary-seeming Masako Katori, who works the night shift in a factory. When a co-worker murders her husband, Katori steps forward and enlists the help of two other women in covering up the crime. Katori lives with and takes care of her sexless and depressed husband and her sullen teenage son who no longer speaks to her. To pigeonhole "Out" as a detective novel does no justice to it. For those who have lived in Japan for many years--or for those who only have the vaguest idea of Japan--this is stunning portrayal of the anomie of modern Tokyo. The portrayals of a Brazilian immigrant, a Yakuza nightclub owner, a Chinese hostess, the working class police detectives, and of course the women themselves are spot-on. Brilliant.

A Riveting Look at the Japanese Dark Side

Published by Thriftbooks.com User , 17 years ago
As Edgar Allen Poe and Rod Serling both demonstrated, the best horror stories take place in the most mundane settings, involving the most ordinary people. Natsuo Kirino's OUT brilliantly follows this dictum, presenting a chilling tale of murder and dismemberment under the most ordinary of circumstances. The result is a gripping page-turner that turns victimizers into victims and ultimately probes the darkest corners of the Japanese psyche. OUT begins with four typical Japanese women who work the night shift together at a box lunch factory. Masako Katori is a middle-aged, former office worker locked into a loveless marriage to a self-isolating husband and an intentionally mute teenage son. Yoshie Azuma is a widow in her late fifties, burdened with the care of an incontinent mother-in-law and two self-centered daughters. Kuniko Jonouchi is an overweight and materialistic young woman whose live-in "husband" has just abandoned her and her small mountain of credit debt. Yayoi Yamamoto is a pretty young mother of two children and wife to a gambling, skirt-chasing husband who has blown their life savings at the baccarat tables of a club owned by Mitsuyoushi Satake, a small-time hood with a horrifying secret past. It is Yayoi who triggers events by strangling her husband in a fit of rage. Realizing what she has done, she calls Masako for help, and they jointly decide to hide the murder and get rid of the body. Their solution eventually sucks Yoshie and Kuniko into their plot, and Satake is fingered by the police as the most likely killer of Yayoi's husband. Satake loses both of his clubs as a consequence and sets out on a course of revenge. The four women's lives head into a free falling death spiral as they are unwittingly drawn into one another's lives and into the yakuza underworld. Desperation leads them to more and more shocking actions, resulting in two of their deaths and a chilling battle of wits, culminating in a sado-masochistic climax. Kirino's writing is serviceable for this type of book, not rich in imagery or description but well-paced, focusing on actions and character motivations. She maintains her characters' sense of desperation and builds her story to a suspenseful climax, leaving the reader guessing how her main characters will respond to events. Kirino is most successful in tracing Masako's discovery of hidden strengths as well as her descent into horrifying depravity. We identify with Masako, leaving us wondering just how dark might be the deepest corners of our own souls. OUT struck me as a particularly Japanese novel, following that culture's peculiar fascination with ritualistic murder and masochistic infliction of pain evidenced by writers like Mishima, movies like IN THE REALM OF THE SENSES, and even the recent spate of pop horror movies like THE RING. America's dark side tends toward mass murderers and serial killers, most of whom are regarded as social misfits or freaks (such as Jeffrey Dahmer, or Hannibal Lechter). Th

Published by Thriftbooks.com User , 19 years ago
Masako, Yayoi, Yoshie, and Kumiko work the night shift at a boxed lunch factory in a characterless Tokyo suburb. Each has her reason for working at night and earning a little extra money: Masako's husband and son have grown so distant that she finds it less painful to be away from them as much as possible. Yayoi has small children and a spendthrift husband. Widowed Yoshie cares for an invalid mother-in-law and a teen daughter in the throes of rebellion, and young Kumiko`s taste for luxury has put her deep in debt. They are ordinary women living in a dull suburb with boring jobs and dead-end lives who manage to find the gallows humor in their situation.. Yet before Out is over, one of them will have murdered her husband, two will embark on a sickening business venture, and one will be dead. Author Natsuo Kirino won Japan's top mystery award for this novel, which smashes the perception of Japan as a society of either anal, work-focused drones or trendy Ginza teens. These women live surprisingly close to the underworld, and they find that violence and seedy glamour are closer than they think. "Out" is dark, violent, and psychologically astute--the very definition of noir. This is Kirino's first book to appear in English, and apparently her other award-winner will be published in English soon. This novel is highly recommended for readers who like to explore the dark side of a different culture.
Trustpilot
Copyright © 2022 Thriftbooks.com Terms of Use | Privacy Policy | Do Not Sell or Share My Personal Information | Accessibility Statement
ThriftBooks® and the ThriftBooks® logo are registered trademarks of Thrift Books Global, LLC