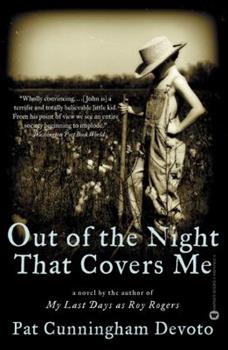 Out of the Night That Covers Me

John McMillan was only eight years old when his mother died and he was ripped, without warning, from his sheltered world of books and gentility. Now on his aunt's run-down tenant farm in southern Alabama, abused by his alcoholic uncle, and completely bereft, John longs for escape--his only hope for survival. He's about to get his wish in a way no one could ever predict....A twist of fate will bring John to the Bend, a black settlement that has become...

Published by Thriftbooks.com User , 18 years ago
I rarely write a review, though I read many. The review that takes the book almost page by page is not a helpful review to me. I would rather see that the reader was totally captivated by the book, the words, the story. "Out of the Night That Covers Me" is such a book. Ms Devoto's first book "My Last Days as Roy Rogers" was the same. A delicious read. The name put me off and I still do not understand the title in relationship to the book and titles are important. But when I saw it was the same author I knew I wanted it. Stories of the south are interesting because of the different lifestyles that southern's seem to have had (or so it seems to me) It is a thought provoker. I personally like a book that has substance that stays with me, one that makes me think not only of the past but of the future. When I have a book that I don't want to end, I know I have read a book that I would recommend. This one is that and then some!

Why Wasn't This Book A National Best Sellor?

Published by Thriftbooks.com User , 20 years ago
I have read many best selling and award winning novels and found them wanting. One wonders sometimes - "Why did this book get an award." My question about OUT OF THE NIGHT.... is "Why didn't it get an award?" As a student of the South, this book gives an interesting look at the South of the 1950's and the changing social norms. Change is a major theme in the book and it would be interesting to discuss with a book club or with students the examples of change. The characters are well developed, although I thought some of the black characters were not as well developed. It would be interesting to do a comparison of Aunt Nelda and Mrs. Vance. Although they appear much different, they have much in common. And likewise between John and Little Luther. The book is magical and a wonderful read and would be excellent for a book club. It could give rise to great discussions and the edition I have has questions included. Don't start it unless you have time to read the whole thing. For those who liked TO KILL A MOCKING BIRD it's a must read.

Published by Thriftbooks.com User , 21 years ago
This book is a study of contrasts. It is, at the same time, troubling to read because of the violence and depravity that it so well depicts and lovely because of the human qualities it illustrates. John, raised in a privileged home, finds himself orphaned and in the care of his white trash relatives who are tennant farmers in rural south Alabama. The change in his life is shocking...but the way he adapts is touchingly beautiful. John's friendship with the Judge is another strong theme -- his tie to the life he used to know, and more. His life at "the Bend" with the runaway blacks teaches him lessons about tolerance and teamwork, and his respect for Tuway, the odd and mysterious black man who can cross the line into the white man's world so easily is well described. The author writes convincingly of the region, the people, and the history. She has a beautiful style that is easy to read, and yet impressive for its control and mastery of language. This coming-of-age novel could someday rank beside "To Kill a Mockingbird" as one of Alabama's best offerings to literature. It's a book that's truly hard to put down.

Published by Thriftbooks.com User , 21 years ago
In her stirring debut novel, "My Last Days as Roy Rogers," Pat Cunningham Devoto gave evidence that she was on the verge of giving voice to an extremely compelling period in our national history, the decade immediately following the end of World War II. Devoto's focus on the onset of the civil rights movement, as witnessed through the lives of poor, rural Southerners, Black and white, described the turmoil of racial injustice, class friction and personal autonomy in a compelling narrative voice. Her second novel, "Out of the Night that Covers Me" is an exceptional work, one written with rare compassion, special insight into the eternal struggle for personal integrity, and convincing accuracy about the impact of racism on the lives of members of an isolated rural Southern community. The novel has been favorably compared to "To Kill a Mockingbird" and deserves that praise.Spindly John McMillan, whose secure, urbane life with his widowed mohter abruptly ends with her premature death, emerges as one of the most beloved youthful protagonists of Southern literature. Suffused with a quiet suffering, he comes to live with his repressed and avaricious Aunt Nelda and her brutally vicious husband, Luther. Devoto spares little detail as she describes John's descent into the hellishly collapsed environment of his new sharecropping home. Ignorant, bound by poverty and tradition, and hopeless, the Spraig family is the antithesis of what he has envisioned for his life. That sudden reversal of fortune, the agonizing realization that brutality and stunted aspirations will be his lot in life create an enormous empathy for the protagnoist. Although brilliant characterizations abound in "Out of the Night," the novel gains its power from a narrative that grabs the reader and refuses to relinquish its grasp until the inexorable and terrifying conclusion permits the reader to understand the path John will lead in his adult life. John's quest for understanding -- his life, his new family, his relationship with African-Americans -- and his absolute strength in confronting pain, humiliation and injustice receive comprehensive scrutiny. Readers will also be impressed by the author's subtle use of symbolism. Each of the most admirable characters in "Out of the Night" are physically or emotionally flawed; yet it is the very disfiguration which presentes each character with unique beauty and dignity. The Judge, a solitary compassionate white man whose vision of racial degradation forces him to treat African-Americans with financial dignity in his role as a bank chairman, is blind. Tuway, an African-American whose unique skin coloration has led to his ability to bridge disparate worlds, overcomes ostracism to emerge as a genuine leader. John, whose skin literally falls off his body after his grisly initiation into the life of a sharecropper, toughens his body but opens his soul to the possibility (and only a possibility) of racial amity.The reputation of Pat

Published by Thriftbooks.com User , 22 years ago
Characters that I care about and insight into people and into a period of history. That is how I judge a good novel and this book rates very high on all counts. Beginning with the boy John who grabs our hearts on the first page, we then get to know a world of conflicted very human adults of both races who must deal with life in the highly restrictive 1950's Alabama Black Belt. If you cannot imagine what life in a small Alabama town would have been like or what life in a black community in the south Alabama swamps was, here is your chance in a highly readable, personal story. Readers of the author's first book, My Last Days as Roy Rogers, will find the author has grown into even more clear character development and strong story line in her second novel. You will be sorry to turn the last page.
Trustpilot
Copyright © 2022 Thriftbooks.com Terms of Use | Privacy Policy | Do Not Sell My Personal Information | Cookie Preferences | Accessibility Statement
ThriftBooks® and the ThriftBooks® logo are registered trademarks of Thrift Books Global, LLC