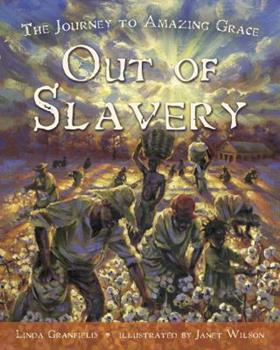 Out of Slavery: The Journey to Amazing Grace

by Linda Granfield and Janet Wilson

The story of slavery, a man, and the world's most beloved hymn. John Newton led a rich life. He was a God-fearing man and a successful seafaring trader; his cargo was a lucrative business, for his wares were human beings. In 1748, Newton's ship, the Greyhound, sailed the triangular trade route from Liverpool to Africa and on to Antigua as it had many times before. But on one journey, at the height of the slave trade, a storm raged. Feeling all was...

Published by Thriftbooks.com User , 12 years ago
Deftly written by Linda Granfield, "Out of Slavery: The Journey to Amazing Grace" is the true story of John Newton, former slave trader and ship's captain who found redemption during a storm in 1748, when his slave ship, the Greyhound, was threatened with destruction. John Newton prayed for salvation and he promised that if spared, he would renounce the lucrative business of slave trade forever. When his prayers were answered he went on to fight slavery, becoming an Abolitionist, and finally, he wrote the beautiful song, "Amazing Grace." "Out of Slavery" is a meticulously researched nonfiction account of an amazing man's experiences during a time of great change and social upheaval. It is tastefully illustrated by the paintings Janet Wilson in full color depicting some of the historical events described. One of the most moving parts of the book comes at the end in quoting his epitaph: "John Newton, Clerk,/ Once an infidel and libertine,/ A servant of slaves in Africa,? Was by the rich mercy of our Lord and Saviour/ Jesus Christ,/ Preserved, restored, pardoned,/ And appointed to preach the faith he/ Had long laboured to destroy..." "Out of Slavery" is recommended for all ages above 6.
Copyright © 2020 Thriftbooks.com Terms of Use | Privacy Policy | Do Not Sell My Personal Information | Accessibility Statement
ThriftBooks® and the ThriftBooks® logo are registered trademarks of Thrift Books Global, LLC