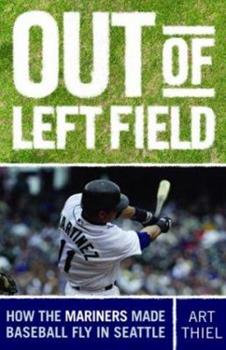 Out of Left Field: How the Mariners Made Baseball Fly in Seattle

This colorful book chronicles the Seattle Mariners' rise from basement to penthouse in major league baseball and Seattle's transition from funky burg to a major city of baseball fanatics. It's all... This description may be from another edition of this product.

Published by Thriftbooks.com User , 14 years ago
Younger baseball fans don't know these days how much the Mariners sucked prior to the mid-1990s. What a different team it is today, with a larger budget and larger stadium. Although author Thiel points out in his introduction that he was not intending to create a comprehensive history of the Mariners, he did just that, though focusing on the more interesting parts (the 1990s and 2001). For a man who makes his living as a sports writer, he paints a realistic portrayal of the biz, warts and all - which is why this book gets five stars. (There are still plenty of Washingtonians angry at the stadium deal, almost a decade later- as Thiel points out, a record amount of public money was spent). Piniella, the loved Junior Griffey, the hated A-Rod, Randy Johnson, and now legend Ichiro are all covered in detail , as well as the front office and community politics. Still a relevant piece of work though now over five years old. Thiel still writes for the Seattle PI newspaper, his column is worth checking out as well.

Finally something to write about on the M's

Published by Thriftbooks.com User , 18 years ago
Well it took awhile but finally the Mariners are worth investigating. Thiel balances action on the field very well with action off it. The whole new ballpark issue I found incredibly intriguing since I missed the whole thing being out of the area the entire time it was going on. Thanks for filling in the gaps! Without giving the whole story away as some of these reviews have done, this is close to perfection as far as baseball team history type books go w/o getting bogged down with mindless trivia.

A baseball team in exchange for dropping a lawsuit!

Published by Thriftbooks.com User , 18 years ago
Baseball came to the Great Northwest in 1969. The Seattle Pilots played one season of major league baseball before the owners saw a quick chance for profit and sold the team in 1970 to Bud Selig, who then promptly moved the club to Milwaukee. Then Washington state attorney Slade Gorton filed suit against the American League for breach of contract. In exchange for dropping the lawsuit, Seattle was awarded a baseball team in the 1977 expansion. Thus begins the saga of the Seattle Mariners. So the Mariners start their run, not with public support, but as a trophy in a legal battle. It didn't get much better for a while. Art Thiel is a local Seattle sportswriter who chronicles the team in exceptional detail. As an adolescent in Seattle I remember those Mariners. He gives details, funny anecdotes, and describes the incredible playoff run in 1995 after two decades of futility that saved the team for Seattle. That run led to the new ballpark and the historic 2001 season. For a casual baseball fan this book is well written and fascinating. However, for any Seattle fan it is priceless. While what happened on the field is known, Art describes what went on behind the scenes. Japanese owners, Microsoft money, and Presidents of the United States were all involved in the process to secure the team to Seattle through their current ownership. A special moment for me was Art noting the back to back games against the Yankee's in the early lean years when Tom Paciorek hit home runs in the bottom of the ninth to win. I was at those games with my father and those are fond memories indeed. A wonderful book, highly recommended to all baseball fans.

Published by Thriftbooks.com User , 18 years ago
Art Thiel is known an Seattle as a brutally honest writer who is not afraid to take on sport's sacred cows. However this book is in no way an expose, no heroes are brought down or made into villains. Instead we get an entertaining book on how The Mariners went from what was once considered the worst baseball franshises of all time to being one of it's most successful teams both on the field and financially. Art touches on Slade Gorton's efforts to bring baseball to Seattle after the Pilots left and the woeful first 18 odd years in the Kingdome. He also brings to light reasons of why Nintendo became involved with other local based corporations in purchasing the team. He tells us how Ken Griffey,Jr and Ichiro became Mariners and gives many more glimpses of the team that eventually won the hearts of the Seattle area. One item that I think merits special note is Art's coverage of the 2001 season. In his mention of the 9/11 tradgedy, you really feel the loss and sadness of that day and aftermath.Art covers the controversies behind the building of the new stadium, but a big absence is that he neglected to mention the roll that Seattle's first sports radio station, KJR had in pounding the message that building the Stadium and baseball are good for the community, nor does he give any ink to Chris Van Dyke and the opponants of the stadium. This book is an easy and entertaining read for both Seattle sports and baseball fans!

The Birth of Baseball Lore

Published by Thriftbooks.com User , 19 years ago
Having lived my entire life in the Northwest, and having grown up with the expansion Portland Trailblazers, Seattle Seahawks, and of course the Mariners, I was skeptical of the well-known beat writer's abilities to capture the true essence of frustration amongst the pro sports fandom in our little corner of America. Art hits a salami with this endeaver.The casual reader (Who is Randy Johnson?) will be emersed in the process of creating franchise lore - that force that drives us ardent fans to keep coming back year after year - looking for the necessary incredients for potential glory. If you wonder why your husband, father, best friend is the way they are - tears well up and goose bumps appear when certain highlights are replayed - this book will teach you the reasons.To the devoted lifer fan, Art fills out the history you think you know with insights and access only available to the public via a media insider like himself. I have never been a fan of Thiel's columns, his travels with the team, etc. or that of Bob Finnegan's for that matter. However this book represents what a quality writer can do with some devoted and concentrated effort in the name of full disclosure.If I could find a specific fault purveyed through out the book it would be the lack of reflection on the media coverage. Dave Niehaus and Rick Rizzs have become the conduit between MLB and 99% of Mariner fans. This needs more coverage and development. Also, the sports media has also bumbled and stumbled its way along for the ride with the franchise. The baseball folks are not the only bafoons and bumblers to mold the history of the Mariners.
Trustpilot
Copyright © 2022 Thriftbooks.com Terms of Use | Privacy Policy | Do Not Sell My Personal Information | Cookie Preferences | Accessibility Statement
ThriftBooks® and the ThriftBooks® logo are registered trademarks of Thrift Books Global, LLC