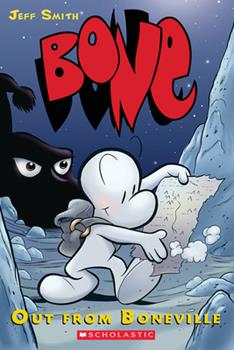 Jeff Smith's New York Times and USA Today bestselling, award-winning BONE books are one of the most popular graphic novel series of all time. Read the first book in this thrilling adventure!After being run out of Boneville, the three Bone cousins -- Fone Bone, Phoney Bone, and Smiley Bone -- are separated and lost in a vast, uncharted desert. One by one, they find their way into a deep, forested valley filled with wonderful and terrifying creatures.Eventually,...

This is so nostalgic!

Published by Audrey P. , 10 months ago
I've been wanting this series for a while but could never find it. I bought the first and second edition in the series and both of them shipped fine. They were in really good condition as well.

My 8-year-old went crazy over this book

Published by Thriftbooks.com User , 17 years ago
I have been trying to find something new for my 8-year-old son that really grabs him. I found this book by accident and could not be happier. I have found him reading after bed time under his covers to find out what happens next after our nighttime reading ends. He has put all the remaining volumes on his Christmas list.

Published by Thriftbooks.com User , 17 years ago
Bone, by Jeff Smith, is an adventurous book about a lost trio that got split up in a dessert. Fone Bone has to find his friends before two furry monsters eat him! If you like funny comics and strange adventures this is your book! 138 pages of eye-pulling comics are a hysterical way to start your day. If you like this book you will LOVE Jeff Smith's others. Matt Groening (The creator of the Simpsons) says Bone is a great read! Heads up Garfield, you've got a rival!

Published by Thriftbooks.com User , 17 years ago
If you haven't read the work of Jeff Smith, you are missing out on not only one of the greatest series of comics in recent memory, but what may be the greatest fantasy epic since the work of J.R.R. Tolkien. I highly recommend picking up Bone in any of its editions, although I lean toward "The Complete Bone" myself. However, there is one significant advantage of the edition listed here that none of the reviewers have mentioned yet (that I've spotted, anyway): This is the first release of Bone in full colour, as opposed to the black-and-white art contained in the previous tomes of the Bone series (with the exception of Rose). This series is so excellent that I'm tempted to get this edition despite already owning the complete black-and-white edition, and I cannot think of higher praise than that.

Published by Thriftbooks.com User , 19 years ago
This is my favorite comic. This story is about three brothers (Fone Bone, Phoney Bone, and Smiley Bone) who have been chased from their hometown because of Phoney's overpowering greed and quest for political power. These brothers are little while creatures call Bones. These Bone brothers get lost and separated as they flee their hometown. Individually they stuble into a fantasy world populated by humans. After the brothers get separated, the story focuses on Fone Bone. Fone adapts to living in this new world. During his long winter stay, he runs into Thorn, a human girl. He instantly falls in love and becomes friends with Thorn, but he finds it impossible to express his love. Fone eventually moves in with Thorn and her grandmother. While staying at their house, there is a terrible crisis. They are attacked by the mysterious and terrifying rat creatures. Can they survive? Read it and find out.The art in this book is simply a pleasure to look at. The story had a simple sweet touch, but really livens up when the action starts. I was especially moved by the love between Fone and Thorn. I'm hoping that Fone will build up his courage and confess his love. If you read only one comic, this is the one you have to read. Don't miss it.

So good, it should be given to all children at birth.

Published by Thriftbooks.com User , 23 years ago
This is awesome. It put a smile on my face that lasted for weeks--really unnerving to the neighbors. The book's sweetness and humour makes this a no-brainer. Sitting in a warm, well light room with this collection comes close to paradise. Now I have to talk about Moby Dick...ZZZZZ.
Trustpilot
Copyright © 2022 Thriftbooks.com Terms of Use | Privacy Policy | Do Not Sell or Share My Personal Information | Accessibility Statement
ThriftBooks® and the ThriftBooks® logo are registered trademarks of Thrift Books Global, LLC