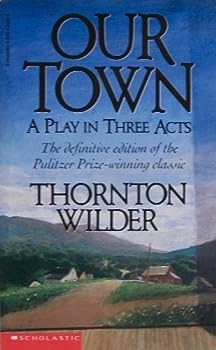 This description may be from another edition of this product. "Wilder's unfashionable insistence on embracing wonders as well as woe is both gallant and exhilarating. . . . Our Town ] leaves us with a sense of blessing, and the unspoken but palpable command to...

A simple story with a big message

Published by Thriftbooks.com User , 20 years ago
Through the use of small town characters and the element of simplicity, Thornton Wilder creates universal themes about the cycle of life that reign eternal even today. The play Our Town tells the story of two simple families, the Gibbs and the Webbs, living in the town of Grover's Corners, New Hampshire. In three acts, Wider journeys through the cycle of life, from the birth of a new life, all way up to the inevitable. Throughout the play, the reader experiences the great milestones in life that they can relate to, such as new life, first love, long lasting love and the effect of death. The last act holds a special significance. In the last act, Wilder uses the theme of death to show the reader how humans fail to "realize life while they live it." Our Town's simplicity also helps it appeal to a multitude of audiences, whether young or old, past or present. From the characters, to the diction, to the set design, Wilder simplifies everything to help the reader better relate to the story. When writing the dialect for the play, Wilder uses typical country vernacular and has the Stage Manager speak directly to the audience, which makes the reader feel apart of the story. Wilder's sets, or lack there of, allow the reader to use their imagination, but not focus so much on scenery that they miss the message. All in all, Our Town by Thornton Wilder is an exceptional play. With this play, Thornton Wilder tries to get us in general not to live life in a blur and to stop and smell the roses. Anyone can appreciate the contents and themes in this play, no mater what age, race, or gender. It is ideal for easy reading and will leave you with a newfound respect for life.

Published by Thriftbooks.com User , 20 years ago
Our Town is, i would guess, the most produced stage play in america. You need no props,no singing,no dancing.It introduced of place,Grovers Corners,N.H. into the lexicon. The play though first produced in the late 1930's takes place in the early part of the 20th century. It tells the tale of two families, the Gibbs and the webbs,in love life and death{Wilder never skirted the issue of death in his writings>}Its timlessness lies in the essence of wilders writings: how the simple ,the mundane taken together make us who we are, and how important the quotidian chores of daily existence are. The heartfelt exclamtion near the end of the play asking if human beings ever realize thier lives before it ends? followed by the wise narrator's some saints and poets has stayed with me since childhood. An easy read, though not a simple one.Is this the great american play? Who knows.It is certainly great and good,and stands up very well almost 70 years later. Essential reading,on anyones list.

A book that spans generations

Published by Thriftbooks.com User , 21 years ago
Thornton Wilder's Our Town is an inspiring play about the joy of life. The play depicts the lives of "ordinary people" in the fictional New Hampshire town of Grover's Corners. The play is set in three acts, each representing a different aspect of life entitled daily life, love and marriage, and death. Wilder sets the stage with nothing but two tables and chairs in order to establish the universality of the play. From there, you are transported to a world very similar to your own and watch the lives of two families and a town come together through hardships and happiness. Wilder's love for the past shows through as the setting is in the early 1900's. The play continues as the children of the two families grow up and experience all of the joys and sorrows of life. In the third act, the theme of death is prevalent. The third act pulls together the loose ends created in the first two acts in a philosophical way. A passage from the play that really sums up what Wilder was trying to get across is "Do human beings ever realize life while they live it?--every, every minute?" The characters in the play realize in the end that people rush through life not taking the time to enjoy every minute of it. They don't just stop and look around at the people, at the scenery, and at the world. Wilder's purpose in writing this novel was to inform people of just that, to live each day to the fullest and have no regrets when it's all over and you look back over your life. I recommend this play for anyone who rushes through life without enjoying the simple pleasures. It is short, it reads fast, but most of all, it says something that everyone needs to hear at one point in their life.

Our Town: a return to where we never were

Published by Thriftbooks.com User , 21 years ago
Does Thornton Wilder's "Our Town" refer to the home town of the State Manager and the characters, or does it refer to the home of the audience? I believe it's both.The play was written in 1938. America was still in the Depression. and people longed for an escape. In the opinion of many film historians, black and white movie-making was at its peak, and its escapes were many. Viewers could see "poor" families who owned two-story houses and had servants; action-adventures heroes who survived cliff-hangers every Saturday; great romances filled with more passion than you could ever see anywhere else; and wartime explosions and gun battles which were still something to flock to on the big screen and avoid in real life. But "Our Town" was none of that. Like the Andy Hardy movie series that began before it and Archie who in comic books was to follow it, ironically in December 1941, it portrayed small town Americana. It was a return to the simple, safe, hometown America that many remembered and no one ever really lived in.But "Our Town" was also very different. The "realism" that began on stage and then permeated the movie theaters after the experimental days of the pre-Depression wasn't there. The fourth wall had been created, and now was destroyed. Here was a Stage Manager who spoke directly to the audience, skipped through time, told us what had already happened when it would occur years after the scene we were watching, and even brought the dead back to life, at least for a moment.The form was odd for its time (although in some ways not so different from the presentational, minimal set theatre of Shakespeare's days.) Had the subject matter been two strange people waiting for a no-show Godot, it might have died in obscurity, perhaps to be resurrected years later. But here were characters everyone knew or imagined they did, at least if they were fourth generation Caucasian. Everyone's mother was there, and father, and brother and sister, and milkman and newsboy and boyfriend and girlfriend and husband and wife. In fact, they could see themselves. The characters represented the past everyone imagined they had.The limited suspension of disbelief required in the first two acts and oddly in the third act still made real one important message: it is the small things in life, the trivial, everyday things that are really important. Ironically, Wilder seemed to argue against his own thesis, showing in the third act how the dead would forget the trivialities and even major events of life and move on. But as we saw when one character relived and then couldn't stand to relive her 12th birthday, the important things in life are a mother's hug, milk delivered to your door, and "food and coffee--and new-ironed dresses and hot baths..." (Act III). As the poet and wise man Solomon said in the biblical book of "Ecclesiastes," power and great wealth are nothing but "vanity" and meaningless, and the important thing i
Copyright © 2020 Thriftbooks.com Terms of Use | Privacy Policy | Do Not Sell My Personal Information | Accessibility Statement
ThriftBooks® and the ThriftBooks® logo are registered trademarks of Thrift Books Global, LLC