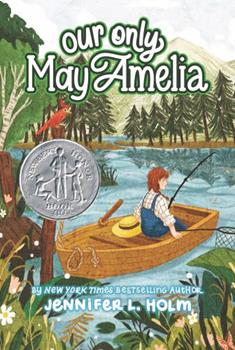 Our Only May Amelia

(Book #1 in the May Amelia Series)

The beloved Newbery Honor book by the author of The Fourteenth Goldfish , about a spirited heroine growing up with trying circumstances, a sense of adventure, and tremendous heart. It isnt easy being a pioneer in the state of Washington in 1899. Its particularly hard when you are the only girl ever born in the new settlement. With seven older brothers and a love of adventure, May Amelia Jackson just cant seem to abide her familys insistence that she...

My daughter was very disappointed in the book.

Published by Thriftbooks.com User , 3 years ago
Somewhere there needs to be notification that on Page 97 is a rather large not necessary curse word that even 12 year olds don’t need, especially since it takes places in 1898. It is also written in first person diary format which includes no quotations for any dialogue breaks and rarely has commas. I truly wish I had known both these things before wasting money on it.

Richie's Picks: OUR ONLY MAY AMELIA

Published by Thriftbooks.com User , 17 years ago
I'm a guy who lives in a farmhouse on a hillside amidst four women of various ages. If I count in all the warm-blooded critters on the farm, there are sixteen of "them" and three of "us"--a goofy male retriever named Samwise, a young and excitable male Nubian dairy goat, Cool Hunter (named for a character in the book, SO YESTERDAY), and me. I serve on the Best Books for Young Adults committee which consists of fourteen female librarians and myself. I am represented by a female member of Congress, two female members of the US Senate, and a female member of the State Assembly. Often a Saturday afternoon will find another six to eight female schoolmates--friends of our girls--giggling and screaming around the farm. Thus I kind of know what it feels like to be May Amelia. "There's no accounting for luck, especially luck in getting brothers." May Amelia is a twelve year old girl living in Washington State in 1899 with her parents and her seven brothers. There is not another girl in her neck of the woods with whom to play or commiserate. There are Indians, bears, cougars, logging camps, a school you reach by boat, and one more baby on the way. Will this baby turn out to (finally) be another girl? Jennifer Holm does a superb job of characterizing each of May Amelia's seven brothers. (One, Kaarlo, is technically a blood cousin--and a rather grumpy and rude one at that--who lives with them.) I really like Isahiah who is in charge of the family herd of sheep. Having quietly named each of the sheep after one of their human neighbors--based upon the sheeps' visages and those of the neighbors'--there is a hysterical scene that follows Isahiah's opening a door and yelling, "Hurry! Mrs. Peterson has broken her back out in the south pasture," and May Amelia's dad then ordering another brother to fetch Mrs. Peterson's son Lonny on his way out there. But the special brother--the one who is charged with keeping his eye on their sister, is close to her age, and is always there for her--is Wilbert. "For every evil God sends to me he sends an angel and I know sure for certain that Wilbert is my guardian angel." The evilest of those "gifts" turns out to be a grandmother from hell who comes to live with her family. Through the series of adventures that together make up OUR ONLY MAY AMELIA, we get a real sense of the frontier that still existed in the Pacific Northwest a mere hundred years ago. We also get the fascinating paradox of having most of the males in her life constantly chiding May Amelia to be a Proper Young Lady while most of the grownup ladies around her are really pretty tough frontier women. And, finally, we get a lively portrait of a sister surrounded by brothers who is so often struggling to just be "one of the boys."

What a wonderful book

Published by Thriftbooks.com User , 21 years ago
I read this book on an airplane and I cried openly. I felt so lucky to have a chance to look across time and space into this imtimate view of a girl growing up at the turn of the century, based on a real person. I found the use of capitalization absolutely perfect in conveying the not only the meaning of the text but the emotional impact and the way May Amelia was internalizing what is being said to her. The present tense only made the perceptions more immediate, and I think all together the author's choices were extremely effective in successfully creating a true time travel experience for the reader. There were many characters, boys and girls, and they all were very distinctive. I would hate to think any girl coming of age would miss out on the chance to know May Amelia just because some people are sticklers for more traditional format, since this book really lights up the shelves of children's literature and I can't wait to read it out loud to as many kids as will listen. To the other reviewer: yes, Zachary Beaver is terrific, and I do agree that the National Book Award has promoted some sensational children's literature that surely rivals the Newbery, but there's no need to read one instead of the other. Let's be glad there are more forums to recognize the best of the best! I'll wager time will prove that Our Only May Amelia is among the more enduring and beloved female protagonists from the turn of OUR century! P.S. if you like this book, try The Birchbark House by Louise Erdrich, you'll like it, too!

Published by Thriftbooks.com User , 21 years ago
I am astonished by the strong, negative reactions to May. The book is delightful! The characters are lively and believable--from headstrong, tomboyish, yet romantic May; to her stern but practical and loving father, who's trying to hold things together in a tough environment; to Grandmother Patience, who rings so true to me that I can only guess that the last reviewer has never had experience with such a selfish, spiteful person--believe me, they do exist.All of these petty complaints about the style (no quotation marks, the capitalization, etc.) just shows me how very small so many people's minds are. Complaining about that is like complaining about the speech patterns, punctuation, and spelling of the narrator of "The Adventures of Huckleberry Finn."As for hearing more about May's aunt the "kept woman"--I mean, come on...this is a kid's book, after all!Ms. Holm has filled the turn-of-the-century Pacific Northwest--a setting heretofore unexplored in literature--with life, delightful characters, wonderful anecdotes, and real heart. I feel very happy knowing that this Newbery winner will stay in print forever, and that children will be able to read this wonderful story for generations to come.

Published by Thriftbooks.com User , 21 years ago
I know this book won a Newbery and is supposed to be for kids, but I have to say I loved it too, and I'm a grown-up. May Amelia is drawn with such a clear vision that she leaps off the page and into your heart from the very beginning. She's sharp and witty and likeable and won't stand for any guff from anyone who wants her to be something she's not. Now I have to strongly disagree with the reviewer who didn't like the format: I loved the format for two reasons 1) it conveyed an immediacy and directness which is what May the character is all about, and 2) it helped remind me, as I was reading, that May is the child of immigrants and thinks in Finnish. It's so rare to find a writer who can tell a great yarn and can be a real artist with form too. Faulkner could do it; and I predict a bright future for this author too.By the way, this book is not just for girls either -- I was really moved by May Amelia's struggles to find her place in the world. Anybody (boy or girl, young or old) who has ever felt that everyone around them wants them to be something they are not will be deeply moved. I can't wait for the author's next book!

Published by Thriftbooks.com User , 22 years ago
This a very touching story. It is so realistic and interesting. It takes place in the Nasel river area in South west Washington and in Astoria Oregon. You see what life was like for another 12 year old a hundred years ago. Have a box of kleenex handy.
Copyright © 2022 Thriftbooks.com Terms of Use | Privacy Policy | Do Not Sell My Personal Information | Accessibility Statement
ThriftBooks® and the ThriftBooks® logo are registered trademarks of Thrift Books Global, LLC