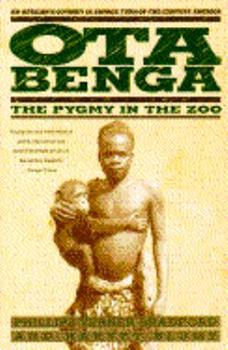 Less than a century ago, a human being was put on display in New York's Bronx Zoo. This is the astonishing and appalling story of Ota Benga's odyssey in savage turn-of-the-century America. A... This description may be from another edition of this product.

Pygmie in the Zoo

Published by Thriftbooks.com User , 15 years ago
I heard about this book while listening recently to National Public Radio. I'm glad I took the time to get it and to read it. It's the fascinating story not only about a pygmy named Ota Binga, but about ourselves, the people of "the Modern age." Though we're a bit distanced from the early 20th century, we still bear the marks of Modernity with its trust in empiricism and its belief that science has all the answers. Thinking themselves the epitome of humanity's development, and inspired by theories of social Darwinism, inquiring minds went to Africa in search of pygmies they could put on display at the 1904 Worlds Fair in St. Louis, along with the aged Chief Geronimo, Ingorots from the Phillipines, and others. When S. P. Verner returned most of the pygmies to their native land, Ota asked to return to the United States, once again becoming a pawn in Verner's plan to win accolades and gain financial reward because of his travels in Africa. Though few took Verner very seriously (in great part because of his lifelong struggle with mental illness), the Bronx Zoological Gardens did take an interest in Ota. It was there that he became a virtual prisoner of that institution and became known as "the pgymy in the zoo." When representatives of the Colored Baptist Ministers' Conference received word of Ota's address being at the zoo's Monkey House, they pressured authorities to be allowed to take him to an orphanage (although Ota was already an adult). Finding Ota to be more and more unmanageable, the zoo's leadership agreed. Rather than ruin the story for you, let me encourage you to read it for yourself. It takes a few more turns as Ota moves south and it eventually comes to a sad end. Abandoned by Verner, and unable to purchase a ticket to Africa, Ota Binga finds another way to return to his beloved land: "If the darkness IS and the darkness is of the forest, then the darkness must be good." This book is both entertaining and disturbing. Above all, it is thought-provoking. One of the authors is grandson to S. P. Verner, so it was probably a difficult volume to produce. Looking closely at our ancestors can be unnerving ... it can remind us of ourselves.

Worth Reading if the Subject Interests You

Published by Thriftbooks.com User , 16 years ago
I'd read references to a pygmy being placed on display in a zoo around the turn of the Century, but had never seen more till I was inspired to investigate by a song about the pygmy in an album by Pinataland. This book was the only adult book I was able to locate on the subject. I was suspicious because the grandson of Verner, arguably the "Villain" in the story was involved in the book. The book appears to me to be reasonably unbiased, and certainly is no whitewash of Verner. It tells about Verner's three trips to Africa, how Ota Benga went to the USA with Verner, returned to Africa, and asked to go back to the USA, supposedly temporarily, but what ended up to be a permanent and tragic return. It ends up that Benga was actually on public display twice, and that there was another group of Africans with him placed on display who had a less unhappy end. There are a number of divergences from the story of Ota Benga and of Verner, especially in the first third of the book. These made me impatient early on, but the divergences are justified. There are a lot of people involved in this story from all over Europe and North America, including Bernard Baruch, Geronimo, King Leopold II of Belgium, Roger Casement the Irish revolutionary, Mark Twain, and P.T. Barnum. I recommend finding the book if you are remotely interested in the topic. My personal suspicion is that after the raid by hostile Africans that destroyed Ota Benga's family originally, Benga was pretty much destined for an unhappy end. This doesn't excuse the selfish and/or indifferent behavior of Verner. Verner shifted from a caring, but not too responsible guardian of Benga early on to to later seeming to actively seek to forget and ignore the human who had placed his future in Verner's hands. The only real negative about the book I can find is that the author is sometimes tempted to journey into psychohistory of his characters with little justification. As long as you accept these ventures as sheer speculation and nothing more, you'll be fine.

Published by Thriftbooks.com User , 20 years ago
A remarkable story of a heroic pygmy caught up in western society and western prejudices. Recommended as a good read.

Published by Thriftbooks.com User , 22 years ago
I picked up this book not expecting it to be true. The author does a good job of illuminating the lives of many people in and around the main character Ota Benga. This book also expertly portrays the cultural and political environment that raped Africans in the Belgian Congo, and oppressed them in Anglo-America. I highly reccomend this for your own library if you are an honest student of history.
Trustpilot
Copyright © 2022 Thriftbooks.com Terms of Use | Privacy Policy | Do Not Sell My Personal Information | Accessibility Statement
ThriftBooks® and the ThriftBooks® logo are registered trademarks of Thrift Books Global, LLC