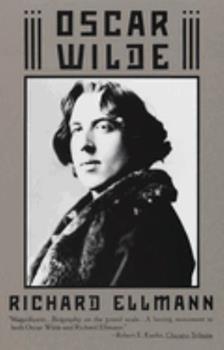 Winner of both the National Book Critics Circle Award and the Pulitzer Prize, Oscar Wilde is the definitive biography of the tortured poet and playwright and the last book by renowned biographer and literary critic Richard Ellmann. Ellmann dedicated two decades to the research and writing of this biography, resulting in a complex and richly detailed portrait of Oscar Wilde. Ellman captures the wit, creativity, and charm of the psychologically and...

Likely to stand as the definitive biography of Wilde

Published by Thriftbooks.com User , 19 years ago
If Richard Ellmann had not already written the definitive literary biography (his astonishing JAMES JOYCE), this utterly first-rate biography would be a legitimate candidate for the title. One might initially think that Wilde would be an easy subject for a biography: his life was interesting, eventful, literarily significant, triumphant, and tragic. But the problem is that for many Wilde has become a symbol either of the late 19th century Victorian decadence or the oppressed homosexual. To treat anyone, and especially Wilde, primarily as a symbol or a representative of anything outside himself, is to distort and misrepresent. The genius of Ellmann's biography of Wilde is that Wilde never becomes either more or less than the writer and person Oscar Wilde. The portrait that emerges of Wilde is absolutely fascinating. If Ellmann's JAMES JOYCE is the greater biography, Wilde emerges nonetheless as the more interesting of the two Irish authors, and perhaps the more brilliant, if not the more productive. Indeed, one of the things that emerges from Ellmann's book is a sense that Wilde might have become a greater writer than he did, and not just if he had not sued the Marquess of Queensbury and had not been sent to prison on sodomy charges. Wilde emerges as even more brilliant than the work he produced, as if he had produced much of his work with a minimum of reference. Ellmann does a marvelous job of situation Wilde in his time and place, with the cultural and artistic concerns paramount at the time. He also does a fair and just job of depicting the major involvements in his life, beginning with Whistler and his wife Constance and continuing on with his various involvements, especially with Alfred Lord Douglas. With the latter, Ellmann certainly does not try to idealize the relationship, but recounts it warts and all. If there is a villain in the book, it is not, surprisingly, the Marquess of Queensbury, but his son Lord Douglas. The saddest part of the book, by far, is the section recounting Wilde's life after leaving prison, which is one disappointment after another. He first intended to reunite and reconcile with his wife, but she unexpectedly died, thereby cutting himself off from both a family and his children. He then reunites uncomfortably with Lord Douglas, but the attempt is a disaster. He final year or two are recounted as being especially miserable, with an impoverished Wilde reduced to conversing entertainingly with strangers for the benefit of a drink. It is especially heartbreaking to read how almost all his former friends cut him off, refusing to help him in his time of greatest need. An encounter with a young man from Arkansas provides perhaps the most apt Wilde quote from his last days. Upon hearing about Arkansas, Wilde remarked, "I would like to flee like a wounded hart into Arkansas."One learns a vast amount of fascinating biographical detail about Wilde's life from this book. For instance: Wilde was double-join

A Must-Read For Wilde Fans

Published by Thriftbooks.com User , 19 years ago
Oscar Wilde was a man of paradoxes, both a man completely of his time and ahead of his time. He is also one of the most interesting, and tragic, literary figures of all-time. In our age of "information quick" (though it was the same in his own age), Wilde is often misunderstood (both his life and his works.) It's easy to get a one-sided version of Wilde the writer, or Wilde the man. That is why this extremely well-written, Pulitzer Prize-winning, masterpiece of a biography is absolutely essential for the Wilde scholar or the Wilde fan. Ellman skillfully avoids what he could've so easily done, and what so many other have done: write a sensational, tabloidistic account of Wilde's remarkable and scandalous life. Instead, he carefully, skillyfully - and, not least important, lovingly - assembles a neat balance between the sensational elements of Wilde's remarkable life and his literary legacy. Wilde, whose works are often dismissed (despite being probably the most widely quoted source in the world outside of The Bible and Shakespeare, and despite having his works widely and frequently plagarized) because of his lifestyle, and Ellman thankfully gives him his due here. Thanks to people like Ellman, Wilde's literary works rest now, finally, where they are due: at the top of the pantheon. He also goes a long way towards explaining the underlying motives behind Wilde's seemingly self-conscious descent into oblivion. Wilde, to the casual observer, seems almost to have been on a deliberate mission of artistic and personal suicide, and Ellman goes a long way here towards explaining his motives. As Wilde himself said, his life itself was his greatest work of art - it's very moving and incredibly tragic to watch his spectacular meteoric rise and even more spectacular fall, leading into his amazing decline, disgrace, and exile. One of the most famous men of his time in the 1890's, it's incredible to see how totally Wilde was shunned after his imprisonment. However, with the passage of more than a century - in which tolerance has made great bounds, both for gays and for the expulsion of literary censorship - Wilde's star can hardly be said to have ever shined brighter. Every year brings a new movie adaptation of one his plays (a movie of this book was even made a few years ago), his plays are still being staged, and his books are still widely read and discussed - not to mention that he is one of the most widely quoted invididuals in the English language. One may still well question Wilde's wanton ways and his decision to face the music, even when it was obvious and inevitable that he was going to lose both his reputation and possibly his life - but remember only what one W.B. Yeats has said of Wilde: "I never for a moment thought that he made the wrong decision" - Wilde, who lavished and delighted in pointing out the hypocrisy of his age and society won the right, by submitting to it, to critize it more. Now, a hundred years on, Wilde - poet, playwright, wit, an

This book will have you eating, drinking and sleeping Wilde.

Published by Thriftbooks.com User , 21 years ago
Richard Ellmann obviously knew just about everything there was to know about Oscar Wilde; what is amazing is that he was able to put most of it in his Wilde biography and still make it a graceful, engrossing read completely free of boredom or didacticism. Wilde was one of the truly great personalities of all time, and Ellmann not only brings him to vivid life, but demonstrates why he was one of the most important literary figures of the 19th century.

The Full Sum of the Man, His Work and His Times

Published by Thriftbooks.com User , 21 years ago
With this volume, Richard Ellmann elevates Oscar Wilde into the select circle of Ireland's other literary giants of whom he wrote so eloquently: William Butler Yeats and James Joyce. (It was left to Michael Holroyd to give George Bernard Shaw his due.) While this volume is a sophisticated, wide-ranging, scholarly biography, it also brims with Wilde's wit and bold life, which, as Oscar himself pointed out, was where his genius lay. The slow, steady accumulation of detail, allusion and anecdote pays off as Wilde reaches his pinnacle--the original production of "The Importance of Being Earnest"--only to plunge into the abyss of imprisonment. As Wilde tempts fate with rough trade dalliances and his ill-conceived challenge to the Marquess of Queensbury, you find yourself almost shouting out for him to stop and save himself. But he doesn't, because Ellmann makes us understand that Wilde's nature led him to that point. The end is sad, but his wit never deserts him, right up until his death throes when he notes that either the wallpaper in the room must go or he must--which he does shortly thereafter. Today, qualities that Wilde pioneered are a part of modern life: camp humor, scathing put-downs, an emphasis on style, an obsession with appearances. In Wilde's day, he was an almost solitary figure in that regard, leading the way into the modern world. The witticisms of "The Importance of Being Earnest" are as humorous and apt today as the day they were first spoken in London in 1895. Richard Ellmann helps us understand why.

Published by Thriftbooks.com User , 22 years ago
I bought this book after seeing the movie, "Wilde" which is based on it. I have to say that I caught a bit of "Oscar Fever" while reading it. The book is incredibly thorough and well-researched; Ellman definitely knows his stuff. The book is written in an admiring, respectful tone but remains objective. Excerpts from Wilde's works that the author found particularly significant are included, as well as many wonderful pictures. After reading this book I have a lot of admiration and fondness for Wilde, and I marvel at his fascinating but ultimately tragic life. A couple of months before I read this book I was wandering around the cemetery de Pere-Lachaise in Paris and happened upon Wilde's grave. I didn't think too much of it then but now that I have learned a bit about the man I really do want to go back and pay my respects. Ellman has written a beautiful, loving portrait of Wilde and it is thoroughly enjoyable and poignant. I'd also recommend the wonderful film starring Stephen Fry and Jude Law but to get the whole story, read the book!!!

Oscar Wilde Mentions in Our Blog