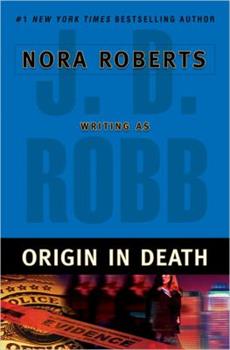 Set in 2059 in New York City, the number-one bestselling In Death series has given fans a searing glimpse into near-future law and order. Now, as scientists work to expand the limits of technology, Detective Eve Dallas tracks the cunning, cold-blooded killer of a father and son. A pioneer of modern reconstructive and cosmetic surgery, Dr. Wilfred B. Icove, is found dead in his office-murdered in a chillingly efficient manner: one swift stab to the...

Published by Brenda Shriver , 6 months ago
However, some of the pages had burned sections. Not to the point I couldn't enjoy the books, but damaged nonetheless. I love the In Death series, and strongly recommend it.

Published by Thriftbooks.com User , 16 years ago
Dr. Wilifred Icove, A famous reconstructive surgeon is murdered cooly and efficiently - a scalpel to the heart - right in his office. Soon after, the surgeon's son, WIll Jr., is also murdered in the exact same manner. Was it the beautiful woman seen leaving the good Dr.'s premises right before his death? Was Will junior's wife involved? Through police procedure Eve and her trusty band of sidekicks (Peabody, McNabb, Feeney, Baxter, et. al) begin to delve into the background of the two doctors and find more than they bargain for. I was severely disappointed in the last Eve Dalls book. I felt that Nora Roberts had drawn from a well that she had visited many times. Not so this book. If you're familiar with the series, you'll recognize another one of her favorite themes, the God-complected doctor. But this one is nicely different from her others. The book begins like many of the others: a murder happens, Eve investigates and calls in her team, and begins to throw around theories. ABout half way through, this book takes off and doesn't look back. The story is tightly plotted and the mystery unravels with some great suspense and exciting revelations. The core of the story is really quite creepy (but in a shivery good way) and the ending just downright popcorn chomping exciting! Outside of the mystery, a secondary plot is Roarke and Eve are planning Thanksgiving dinner. Roarke's Irish relatives come to visit and they've invited the whole gang (including Charles the LC and Crack, the owner of the Down and Dirty). My one regret about the whole story is that we don't get to see that dinner happen. Excellent.

Published by Thriftbooks.com User , 16 years ago
For the past couple of decades Nora Roberts, writing as J.D. Robb, quietly has been creating one of the most consistently intriguing series of police procedural fiction. Collectively these novels are known as the "Death" series due to the appearance of that word in each title. The series itself --- which centers on New York City police lieutenant Eve Dallas in the mid-21st century --- straddles and blurs the genres of mystery, speculative fiction, and romantic suspense. Robb does this exceptionally well, adding a statistic here and a romantic interlude there, just so you know where you are and why. But the focus is mystery and suspense. She is not the first to do something like this --- Isaac Asimov wrote futuristic detective stories and Larry Niven's Gil Hamilton stories are unforgettable --- but Robb's work stands with these stalwarts, as opposed to within their respective long and deep shadows. ORIGIN IN DEATH is Robb's latest work and arguably her best to date. It begins with the murders of Dr. Wilfred B. Icove, Sr. and Jr., an oft-lauded father and son who are known as pioneers in the fields of cosmetic and reconstructive surgery. Both men are found murdered --- one in his office, one at home --- in identical fashion. Dallas intuits that the "why" of these killings is at least as important as the "how" given that the older gentleman was known as "Dr. Perfect" and had a record that was spotlessly clean. Dallas does what she does best, kicking over rocks both literal and figurative to see what comes crawling out. She is ably assisted by her friend Peabody and the seemingly immutable Roarke, her doting husband. A self-made billionaire, Roarke is a genius combination of Midas and James Bond, a Santa Claus with a seemingly bottomless sack of technological goodies who has enough connections to appear to be literally anywhere and to ascertain anything. Dallas's tenaciousness and Roarke's resources eventually uncover not only the motive but also the perpetrator behind the deaths of the Icoves --- and in so doing find a quiet horror that puts Dallas in an ethical dilemma for which there is no easy solution. Robb's ability to merge mystery and speculation is displayed at its finest here. Those who are unfamiliar with the series and who might be otherwise intimidated by a protagonist who has been the subject of multiple novels need not worry. Robb offers just enough to bring new readers up to speed and drops just enough references to encourage a look at her backlist. ORIGIN IN DEATH, however, is a marvelous place to start. --- Reviewed by Joe Hartlaub

Published by Thriftbooks.com User , 16 years ago
While Nora Roberts (aka J.D. Robb) seems to be paling a bit in her romance novel genre, the In Death series is getting better and better with each subsequent book. Origin in Death starts with a bang: The ugly, possibly professional murder of a Nobel Prize winning doctor and scientist, Dr. Icove, he of the famed Icove Center, plastic surgery hub for the rich and famous. Before the blood is even dry, so to speak, Icove's son, who co-runs the tony clinic, is murdered as well, in the same way. It's up to Eve, cop extraordinaire, to get to the bottom of the murders and figure out what's behind the "too perfect" profiles of the two Icoves and their clinic. What she finds is beyond human imagination, even in the year 2059, where this novel takes place. Along the way, Eve's husband Roarke painfully tries to plan a Thanksgiving dinner/reunion for his recently discovered huge Irish family; Mavis, near the end of her pregnancy, reminds a horrified Eve and Roarke that they are to be birth coaches, and Peabody and McNabb continue to cohabit in bliss. There are some really funny moments in this book, and the mystery and eventual solution are "prime," as McNabb would say. A winner!

Her Best Yet!!!! Would rate it 6 stars if posible.

Published by Thriftbooks.com User , 16 years ago
J.D. Robb (Nora Roberts) does it again. This is one of the best in the series. This book grabs you by the throat on page one and never lets you go till the very last page. This is not your typical romance and in fact all of my family fight over who gets to read the books first. This includes my husband and son. In this book of the series, not only do the sci-fi aspects get more detailed but the character growth of both Eve and Roake are great. While Eve is dealing with the murder of two Dr's that most thought were saints and butting heads with Mira about that issue. Roake is dealing with his relatives and his new found feelings about them coming to visit him in New York. This one has a little bit of everything and you will love it. I read it in one sitting and recommend you don't pick it up till you have time to read it all. Definatly a book you can't put down. I just wish she would write them faster. I loved it!!!!

Published by Thriftbooks.com User , 16 years ago
A saint has been murdered, someone that no one should want to kill. With a mystery so baffling, Eve Dallas is the only cop that can handle the case, and she dives right in. Immediately, she becomes aware that something is off about Dr. Icove Sr.'s death. Every clue she is able to wrest from the case confirms this, especially when Dr. Icove Jr. is also murdered. Soon, she is sure that the doctors were not as lily white as their mourners would have them believed to be, but tarnishing the memories of such sterling citizens has its own dangers. Once she learns what the two victims were perpetuating, Eve is not so sure that the killer was a villain, yet her duty is clearly delineated by the law. With her ever expanding cadre of supporting cast members, Eve Dallas faces her most emotionally charged case yet. Readers will also get to see something truly rare; Eve completely terrified. ***** Though set in the future, this book is extremely relevant to the present time. Despite the tension, or perhaps because of it, wry humor infuses this story, as it does every Eve Dallas book. Eve's ensemble of characters continues to expand, adding depth to the heroine and her world. Roarke is in the book, so to long time readers, need I say more. The chance to re-encounter him is worth the time to read the book, but every page is a reason as well. Not one word is a waste of time in this series. ***** Reviewed by Amanda Killgore, Freelance Reviewer.
Copyright © 2020 Thriftbooks.com Terms of Use | Privacy Policy | Do Not Sell My Personal Information | Accessibility Statement
ThriftBooks® and the ThriftBooks® logo are registered trademarks of Thrift Books Global, LLC