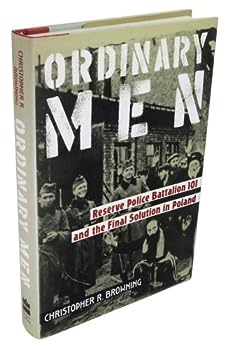 This description may be from another edition of this product. Christopher R. Browning's shocking account of how a unit of average middle-aged Germans became the cold-blooded murderers of tens of thousands of Jews--now with a new afterword and additional...

Condition poor as though punctured through first 55 pages. Condition listed as good, the only option

Published by Marjorie , 7 months ago
Not in good condition.

Published by MC , 7 months ago
I ordered this book listed as 'very good condition' because that was the only option. The book I received had highlighting and underlining and what looks like notes written all throughout the book-extremely distracting! Very disappointing!

Published by Nathan P , 8 months ago
I thought I was going to read more like a story but it mostly read like a texted book. The book does have a juicy center to it if you can get past the long list of names, locations, dates and statistics.

Published by Thriftbooks.com User , 15 years ago
"Ordinary Men" chronicles the rise and fall of Reserve Police Battalion 101, one of several units that took part in the Final Solution to the Jewish Question while in Poland. During the course of their stay, they were responsible for the shooting of 38,000 Jews, while also deporting 45,200 to the Treblinka Concentration Camp. The book argues that the men of Reserve Police Battalion 101, and other units like it, were comprised of ordinary men. It begs the question: How did ordinary men become the cold-blooded killers of the Holocaust? Author Christopher R. Browning does a tremendous job of covering the ground. He also presents a strong case that these people were indeed ordinary men, who came from ordinary backgrounds, only to end up being transformed into the murderers of thousands. However, the book also stresses that some of the men, including several officers, could not be considered "ordinary," as they were trained in Hitler's Nazi organizations from youth. Browning also does something nearly impossible: He humanizes these people without excusing their horrendous actions. Their defense that "they were just following orders" just doesn't fit the bill, as some refused to take part in the actions, and asked to be relieved. If a few men could get themselves relieved from doing the killings, why did so many more not? That is the main question the book gives. "Ordinary Men" is an extraordinary book that chronicles just one unit that took part in the murder of innocent Jews, while also presenting a good case of how ordinary men can become killers. I highly recommend this book to all students of the Holocaust. Grade: A+

I can not recomend this book enough

Published by Thriftbooks.com User , 17 years ago
One of the things that I remember about this particular dark period of history is what my father used to say about it. He felt, and stated, that the thing that was most upsetting was not what happened. But, that the people who did it, "were just like us." This book shows us the monsters of the Holocaust were truly just like us. This is a book about being a team player. It is about consensus and doing just a little more for the unit. In other words, it is entirely applicable today. The moral lesson of this book is clear. Today we are pressured to do things that we know are a little wrong in order to get along. Doing something that is a little wrong is only a matter of degree. I work in an industry where one of the interview questions is, "are you willing to do things, required of you in this job, that may, or do, violate your own sense of ethics or morality." I work here; so you know how I answered. This is a very disturbing book if you read it and in any way relate to the many police officers that it is about. These reserve police are a true cross section of society and reflect a culture and value system very similar to our own.

Published by Thriftbooks.com User , 17 years ago
When the Second World War ended in Europe in May of 1945, some six million Jews had been killed in what the Nazis termed the Final Solution. In its barbarity, the Final Solution is unprecedented in this the history of Western civilization. However, some 50 years after the war, the question still remains: what type of person could carry out this genocide? Christopher R. Browning delves into this aspect of the Holocaust in Ordinary Men: Reserve Police Battalion 101 and the Final Solution in Poland.Like many other such battalions, Police Battalion 101 was organized for the purpose of policing and pacifying territories captured by the advancing German during the early years of the war in the east. Their role in Hitler's quest for new Lebensraum for the German people was significant. They were, however, a non-combat unit. For this reason, the unit was mostly comprised of men in their forties and those unfit for combat duty.Browning classifies the men of Police Battalion 101 as being ordinary: he points out that most were conscripted white-collar types from Hamburg and Luxembourg, who, unlike the SS and other German units, were not overtly indoctrinated with Nazi ideology. But, as the reader eventually discovers, regardless of individual variances in belief, the involvement of the majority of Police Battalion 101 in the Final Solution is undeniable. By mid-1942, Police Battalion 101 was stationed in Lublin District in central Poland. Over the course of the next 12 months they would participate in a series of massacres, deportations, and a lengthy "Jew hunt." The profound psychological transformation that the men of the unit underwent while undertaking these operations is startling.Some men initially refused to participate in the first killings, with dissension being the norm and, later, an accepted fact even among the officers of the unit. Yet in time most would become willing participants.By November 1943, the once reluctant Police Battalion 101 would conduct, without hesitation or remorse, massacres at Majdanek and Pontiawa that, in total, took over 30,000 lives.The majority of the details about the Battalion come from trials held in Germany in the 1960s. Many accounts and testimonies by former unit members were recorded at the time, but Browning admits that their information is limited. He reminds the reader that some 20 years after the fact the participants were in a situation where those testifying could downplay their role by intentionally being ambiguous or forgetful. "Quite simply," states Browning in the preface to Ordinary Men, "some men deliberately lied, for they feared the judicial consequences of telling the truth as they remembered it. Not only repression and distortion but conscious mendacity shaped the accounts of the witnesses."Taking this into consideration, Browning's ability to fashion a clear, accurate and consistent account of the horrific conduct of Police Battalion 101 is excellent. Deciphering the ambiguities a

Published by Thriftbooks.com User , 21 years ago
This book is a rare combination of scholarly analysis and narrative style. It is equally good for the casual reader and serious student.The fact that Goldhagen lifted large portions of this book's narrative storyline should be an indication of how solid the research was. This information is a goldmine that Goldhagen stripmined for his own conclusions.Fortunately, Browning has a keen authorial voice and clearly draws his own conclusions on the culpability of Battalion 101. This is a rare, serious glimpse at the perpetrators of the Holocaust.

Published by Thriftbooks.com User , 21 years ago
Christopher Browning tackles the challenge of getting inside of the minds of the men who carried out the worst war crimes of the last century--maybe of all humanity. He paints an intimate picture of the 101st Reserve Police Battalion as they struggle to come to terms with the reality of the Final Solution as it happens. The study reveals that these men were not monsters, as we would like to believe them to be, but "ordinary men" who found themselves in an extraordinary situation. Browning's argument is largely based on recorded testimony from the Neuremberg Trials. Using this testimony he discovers that these men are not driven to kill with an animal rage born of unnatural hatred for Jews, but rather by the pressures of society. This is not to say that anti-semitism was not a factor, or that the crimes commited were somehow less heonous because they were not done out of irrational hate, just that these people were not extraordinary. This idea is frightening because it suggests that the Holocaust was not a product of mass insanity, it was a basic failure in human nature. Browning backs the theory with anectdotal information about the men of Reserve Police Battalion 101 on their mission of destruction, and a psychological study on the pressures to conform to peers and recognized authorities. Ordinary Men achieves its purpose with masterful skill. It is an historical work which transcends its field to provide insight not only into an historical debate, but simple human nature. One can not begin to understand the Holocust without first reading this book.
Copyright © 2020 Thriftbooks.com Terms of Use | Privacy Policy | Do Not Sell My Personal Information | Accessibility Statement
ThriftBooks® and the ThriftBooks® logo are registered trademarks of Thrift Books Global, LLC