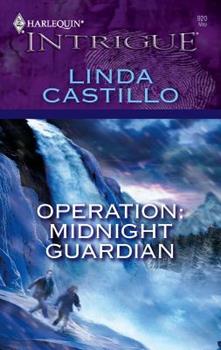 (Book #3 in the Operation: Midnight Series)

Operation: Midnight Guardian by Linda Castillo released on May 09, 2006 is available now for purchase.

#3 OF THE MIDNIGHT OPS - I ENJOY FOLLOWING CHARACTERS

Published by Thriftbooks.com User , 14 years ago
Mattie Logan was wrongly accused of being a traitor. No one believed her. Loved the excape. Someone was after her and killed the U. S. Marshall's taking her to prison. Now she was running for her life. Great Guns! a blizzard is approaching. I could feel the hypothermia. Martin Wolfe calls in his Midnight agent, Sean Cutter. Sean had suffered the torture meted out by Jaguar and survived, not without scars. He knows what will happen to Maggie if Jaguar gets ahold of her but Wolfe considers her expendable. Sean is not so certain of Maggie's innocence. But she can't prove she was being framed from inside prison. The trek through the blizzard, the excape from the rocket throwing helicopter and the destruction of some of Jaguar's men was movie scene worthy. Thoroughly enjoyable plot - excellent pace - a villian who is dangerous - a conflicted hero - and another silly woman who thinks she can help on her own. And she is working on a weapon of mass destruction? Cutter finally calls for backup from another member of Midnight, Mike Madrid [his story comes up next in line]Operation: Midnight Rendezvous. Jake Vanderpol just makes an appearance [Operation: Midnight Escape]#2 Definitely Recommed these books -m - I love following characters from book to book.
Copyright © 2020 Thriftbooks.com Terms of Use | Privacy Policy | Do Not Sell My Personal Information | Accessibility Statement
ThriftBooks® and the ThriftBooks® logo are registered trademarks of Thrift Books Global, LLC