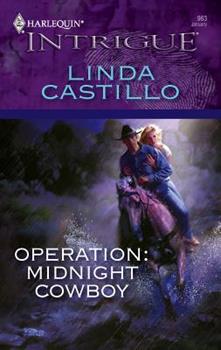 (Book #5 in the Operation: Midnight Series)

All Bo Ruskin wanted was to forget his tragic past and to reclaim his quiet cowboy life. Instead, he had orders to protect Special Agent Rachael Armitage. Furious and frustrated, Rachael would rather die than abandon her dangerous mission. For even in the safety of Bo's Montana ranch, an international crime lord was out to grant her wish. Drawn to this mysterious, hardened cowboy from her past, Rachael was certain Bo was hiding something. But first...

Published by Thriftbooks.com User , 14 years ago
Rachel Armitage has incured the wrath of the international crime lord, Viktor Karas. She killed his son. Now she is on the run from his hired killers. Sean Cutter [#3] is the head of Midnight Ops. and he is pulling Rachel out of the mix and wants a former agent, Bo Ruskin to protect her. He has a ranch in Wyoming that he retired to 2 years ago after killing a former partner, Rachel's husband. 25 year old Ivan Petrov, a hired killer was tracking down Rachel for Karas. He enjoys killing with a little brutality thrown in. How can Bo explain to Rachel the role he played in her husband's death or the fact that he couldn't stand to touch a gun. And he was known for his crack shots. He sure new how to bring down a helicopter. And his hideout was unique. The Cave? what an innovation. The confratation was great and got Cutter back alive. But hey, did any of these last three characters ever marry the females? It doesn't sound like Cutter got married. And how did he inherit the top place at Midnight HQ? Will recommend this series as well worth reading and very entertaining.
Copyright © 2020 Thriftbooks.com Terms of Use | Privacy Policy | Do Not Sell My Personal Information | Accessibility Statement
ThriftBooks® and the ThriftBooks® logo are registered trademarks of Thrift Books Global, LLC