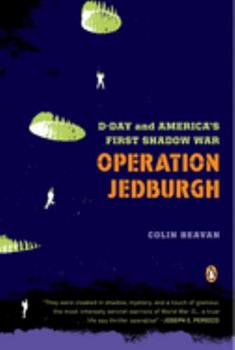 A thrilling account of one of the most important covert operations of World War II In 1943, less than a year before D-Day, nearly three hundred American, British, and French soldiers--shadow warriors--parachuted deep behind enemy lines in France as part of the covert Operation Jedburgh. Working with the beleaguered French Resistance, the Jeds launched a stunningly effective guerrilla campaign against the Germans in preparation for the Normandy invasion...

A little-known aspect of the Normandy invasion

Published by Thriftbooks.com User , 12 years ago
When the Allies invaded Normandy in 1944, the Germans had forces distributed around France. One of the larger formations was the 2nd SS Panzer Division, which was stationed in Toulouse. In cases such as this, armies devise contingency plans, so that everyone can act without much thought when a forseeable event occurs. In this case, the event was the landings in Normandy; the Germans planned to send the 2nd SS Panzer north to the beachhead if this occurred. It was supposed to take two days plus part of a third for the division to arrive near the beachhead; instead it took more than two weeks. While much of the difficulty in moving the formation was caused by Allied air attacks, a considerable portion of the delays was caused by French partisans, who blew up bridges, blocked roads, ambushed isolated small groups of Germans, and generally made a nuisance of themselves. While the partisans would have done this regardless of what the Allies did, they were much better organized, and better-armed, than they otherwise would have been. This was largely the result of training, equipping, and leadership provided by the teams operating under Operation Jedburgh. The American component of these teams was drawn from the ranks of the OSS SO (Special Operations) division, while the British and French components came from their respective organizations. There were a number of these teams, organized prior to the start of the campaign, and inserted into France for the most part after the landings in Normandy had occurred. The teams typically consisted of 3 people, usually 2 officers and an enlisted radioman. They generally included at least one Frenchman, the thinking being that they would liaise better with the partisans than either a Brit or an American. The intent was to divide the personnel evenly between the three nationalities, and it worked out that way, more or less. I really found this book very informative. The subject is one that's remained secret, or at least quiet, until relatively recently, and many of the participants never did speak about what they saw and did during this era. This book fills in a lot of gaps, and shows how this operation contributed to the Allied victory in France. I enjoyed this book and think it a valuable addition to my library; highly recommended.

Published by Thriftbooks.com User , 15 years ago
This is a fantastic read. I found my heart pounding through much of the book. The author makes you feel like you are there... I never knew about these guys and their mission. I wish the vulgarity was less but it is infrequent. I have really enjoyed this book. These guys were very brave heroes in a horrible situation. I hope there is a movie based on the book.

The Story Of Operation Jedburgh's Impact On The D-Day Invasion

Published by Thriftbooks.com User , 15 years ago
In Colin Beavan's OPERATION JEDBURGH, the now declassified files of the OSS (the precursor of the CIA) are opened to reveal the huge contribution of the French Resistance forces before, during and after the landings at Normandy. Strategic thinkers realized the potential value of the Resistance, but they also knew that these groups needed weapons, explosives, organization and training to be effective saboteurs. The "Jeds" as the teams were called, consisted of two officers and an enlisted radio operator. One officer, either British or American, was the leader, and the second officer was from the country where the team was to operate (in this case, France). The early part of the book outlined the extensive training these teams underwent, including the dangerous technique of low-altitude parachuting. So, into France the teams went. Right away, the Jeds were faced with the difficult task of redirecting the Resistance's priorities. All they wanted to do was kill Germans, rather than to assist in the important work of co-coordinating with the needs of the regular Allied forces at the beachhead. To a large extend, these tasks were successful, and the sabotage to delay German forces reinforcing the defenses at Normandy turned out to be critical, especially during the storms in the Atlantic immediately after the invasion. Then, it was the formidable task of protecting the flanks of Patton's 3rd Army as they slashed across France to the German frontier. Although I've read many books on the invasion, I'd never learned of the importance or successes of the Resistance during those desperate weeks at the beachhead and the eventual break out. Well worth the reader's time and I would recommend this book.

A Short History of French Resistance

Published by Thriftbooks.com User , 15 years ago
Colin Beavan's grandfather worked as an executive of the CIA, but never talked about his business. The opinions about the CIA began to change in the 1960s from heroes to dirty tricksters (p.xiv). They were seen as Imperial agents who plotted assassinations, tried to control minds with drugs. Ten years after his grandfather's death Beavan searched through boxes of old records. His search of the National Archives discovered more documents about the OSS in World War II. This very readable book is about the "Jedburghs" who were dropped into Nazi-occupied Europe to operate with the Resistance for sabotage and paramilitary raids. This helped to defeat the enemy in western Europe (p.xxi). He learned that Gerry Miller had been CIA station chief in 1950s Italy, then returned to an executive job in Langley. They prepared for a World War III that never happened. After the Soviet army invaded Afghanistan in 1979 the veterans of the OSS decided to create a jihad (holy war) to unite Moslem people around the world. They taught them how a militia could defeat an invading foreign army [as in Iraq?]. It was a complete success (p.xxiv). The Soviet withdrawal from Afghanistan in 1989 was followed by the end of Communist rule. But this success was followed by Al Qaeda's attacks against the United States. To understand what the CIA did after WW II you must understand what was done by the OSS during the war. Operation Jedburgh set the example for "large-scale covert action in enemy-occupied territory". Beavan talked to many surviving French, British, and American alumni. He then wrote this narrative of their story. The Notes and Sources refer to the documents. At first the French were not involved with resistance. After June 22, 1941 French Communists began their sabotage (p.17). The Germans then executed prisoners in reprisal, numbers out of proportion that shocked the French and increased the resistance. Many of these did not want De Gaulle as their leader, but accepted this. Page 20 tells how the Carte network was rolled up. [Mere incompetence?] The Resistance was needed to block roads and derail trains when the invasion began. SOE planned a reserve force of agents who could jump into France before D-Day and lead the resistance (tactics and strategy). The Americans provided the resources (p.22). The Resistance in France needed "arms, supplies, and strategic direction" (p.29). Operation Spartan tested this concept, and it worked (p.30). Its actual success required "qualified personnel" (p.43). Chapter 11 tells of the horrors of their Atlantic crossing. Chapter 13 explains the invasion plans; they needed air superiority and the delay of German reinforcements. Sabotage was increased in the early months of 1944 (p.100). On D-Day the Resistance would delay German forces with their attacks (p.101). The Resistance, armed by the Jedburghs, cut rail lines and highways, slowing German troops (Chapters 18 & 19). German troops had to stay to fight the maquis. This resistan

Operation Jedburgh a book thats hard to put down

Published by Thriftbooks.com User , 16 years ago
This is a graet book easy yet informative reading. Auther did his homework when doing the research and interviews for this book . Excellent use of de-classified historical records. Has the flow of a Steven Ambrose book
Trustpilot
Copyright © 2022 Thriftbooks.com Terms of Use | Privacy Policy | Do Not Sell or Share My Personal Information | Accessibility Statement
ThriftBooks® and the ThriftBooks® logo are registered trademarks of Thrift Books Global, LLC