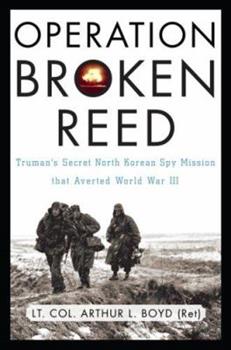 At the height of the Korean War, President Truman launched one of the most important intelligence - gathering operations in history. So valuable were the mission's findings about the North Korean-Soviet-Chinese alliance that it is no stretch to say they prevented World War III. Only one man -- sworn to secrecy for a half-century--survived Operation Broken Reed. Arthur Boyd recalls his role as cryptographer on a team of Army Rangers, Navy Frogmen,...

Published by Thriftbooks.com User , 13 years ago
This is a first-hand account of an amazing intelligence operation that took place in North Korea at the height of the Korean War. The author had to wait for 46 years before it could be published. It is regrettable that none of the persons in the operation knew each other's names, and never could at a later time, after the war, re-unite. Even the manager of the operation remained anonymous. This was a truly incredible mission, and it is mind-boggling to imagine all of the logistics and planning involved. The mission was critical in President Truman's decision NOT to attack across the 38th parallel. If he had done so, it would have meant World War III, and hundreds of thousands of American fatalities. The history also is interesting in that it shows evidence of a joint U.S.-Taiwan intelligence operation. The writing is clear and to the point. Wonderful reading.

A captivating, heartwrenching, detailed account of such an amazing mission!!

Published by Thriftbooks.com User , 13 years ago
I first met Lt. Col. Art Boyd on an airplane trip to Kansas City earlier this year. We sat across the aisle from each other and began to strike up a conversation. He told me he was on his way to give a speech at the Truman Library in Independence, Mo. He asked me if I would be interested in reading his speech and offer feedback. I had no idea that what I was about to read was about an amazing secret spy mission that kept our country out of a third World War. Upon reading his speech which was the synopsis of his book Operation Broken Reed, I was speechless. The experiences that were revealed by Mr. Boyd in his speech had me fighting back tears. The act of bravery that Mr. Boyd and his comrades exhibited at such a young age was heroism at its highest form. After reading the complete version in the book Operation Broken Reed, it touched me even more. To have kept all this inside for so many years had to be a living hell for Mr. Boyd. His desire to locate the families of his fallen comrades so that he can tell them about the heroism of their loved ones is to be highly commended. He wants to be able to locate and bring home the remains of these comrades. After meeting Mr. Boyd I feel certain that if anyone can accomplish this, he will. He has made it his current life's mission to do so. I highly recommend Operation Broken Reed as a book for all to read. We should all applaud Mr. Boyd and his comrades for all that they did for our great country to keep us out of a war that we probably would not have prevailed. The book outlines the mission and the feelings and emotions of all involved with amazing detail. As a reader I felt like I was right there with them on the mission. I hope that the book is turned into a movie so that more people can witness the journey that Mr. Boyd has taken and hopefully provide a means to locate his comrade's families.

Get the story straight - Carefully read the entire text to include the Prologue, the Epilogue and t

Published by Thriftbooks.com User , 14 years ago
Please read my in-depth comment following the negative critical reader review posted by R. Axelrod. It is imperative that the reader fully understands and comprehends the fact that the Operation Broken Reed story was written based upon a factual event, not some mind-generated military intelligence mission. The nine Americans and sixty-six Nationalist Chinese military who died for their country demand to be honored by a grateful nation for their heroic deed. Had they failed, a third world war and a doubtless nuclear holocaust would have ensued, claiming the lives of millions. This story is not, as Axelrod stated,"a fraud." Abundant historical, circumstantial and presumptive evidence abounds, fully supporting the authenticity of the mission. Axelrod's review is a cruel and a disgraceful insult to the memory of my dead comrades. Axelrod, following outlandish and unsupported remarks, drove a nail into the heart of the story with a closing comment, "You can delight in a creative adventure story." One fact remains. Anyone may lay claim to being a "specialist" within any given field, however unsupported words from a self-made fake specialist will lay waste to any boni-fide claim, thereby revealing the non-existence of any true level of training, experience and expertise.

History and Adventure in One

Published by Thriftbooks.com User , 14 years ago
Wow. I started thumbing through this book one evening, and it turned into a 6-hour marathon session. The author really did an incredible job - it's a heck of a read. I laughed and cried and shook my head in horror and astonishment. What a story, and what a thing to live with for so many years. The book really makes you wonder about politics and the futility of war and the differences that timing and circumstance and pure randomness play in the world and in lives and in deaths. Stories like this one should come with a warning that you won't be able to put it down until it's done.

History Critically Important for Today -- and a Great Story!

Published by Thriftbooks.com User , 14 years ago
Meticulously researched and written with great personal honesty, this is an engrossing read. The history alone makes it worthwhile; and if I were teaching modern history, this would be an assigned text for my students. It frames world events since WWII in a way that brings clear understanding of the Cold War and of how those events continue to play out today with critical global impact. Those who do not understand history are doomed to repeat it, and our very survival may depend on all of us understanding this history well. In addition, the story is told with humor, tension, detail, and authentic emotion that makes it a gripping page turner, and completely believable. It establishes characters and relationships that stay with the reader long after the last eye-opening page of Jay Young's epilogue. Truly, an entertaining--and crucial--book. Highly recommended. (By the way, this would make a natural script and an important film, as well.)
Trustpilot
Copyright © 2022 Thriftbooks.com Terms of Use | Privacy Policy | Do Not Sell or Share My Personal Information | Accessibility Statement
ThriftBooks® and the ThriftBooks® logo are registered trademarks of Thrift Books Global, LLC