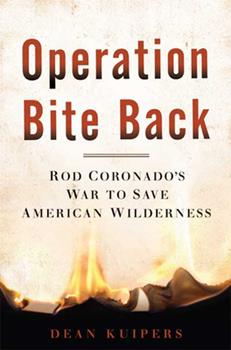 Operation Bite Back: Rod Coronado's War to Save American Wilderness

Rod Coronado was already one of America's most notorious radical environmentalists when he launched Operation Bite Back, a war on fur farming that left a trail of burned-out labs and farms across the country and made him the subject of an intense, years-long FBI manhunt. Now his legacy has made him part of a legal battle over whether or not radical environmentalists should be prosecuted as terrorists. With unparalleled access, Dean Kuipers takes us...

Welcome to the Police State

Published by Thriftbooks.com User , 11 years ago
Rod Coronado is a beautiful man that cares deeply about life. He spent most of his adult life defending the helpless, and for this he was hunted down and caged. He never killed anybody-he valued the lives of even those who hated him, and actively tried to kill him. In generations to come, Rod will be remembered as one of the greatest Americans who ever lived.

A Must-Read for AR, Eco Activists

Published by Thriftbooks.com User , 12 years ago
The following was taken from my blog. To read the entire review, please visit [...]. The book is a must-read for environmental and animal-rights activists. Regardless where one stands on the use of property destruction within the movements, activists should read the book to learn about the movements' histories and where they are heading -- especially with regard to the terrorism legislation that was created in 1992 in response to Coronado's work and which has since been added upon. [...] The scenes of the direct actions -- breaking into and burning buildings -- are suspenseful, and I found myself rooting for Coronado. But after a while I felt he was getting out of control, taking unnecessary risks, becoming addicted to the actions. And I kept tossing the notion of arson -- and burglarly and theft -- back and forth, debating whether it helped or hurt the cause. That's one of the goals of the book, though: to get readers to think about it.

The truth needs to be told

Published by Thriftbooks.com User , 12 years ago
As many other authors have stated, I too have problems with the title of this book. I do think that there are holes in this book also, but I'm not sure that Ron would let anyone write a book that exposes everything. So, again, as a previous poster wrote, we know more than we did perhaps, but not all. The reason that I think this book is a must-read is because now we have the Animal Enterprise Terrorism Act (AETA) hanging over the head of any activist in this country. We now have animal and environmental people being arrested because they sent a fax. And once arrested, they are put in secret prisons, with no chance to communicate to anyone like they could have in a regular prison, ie phone calls, visits, etc. Interestingly, so-called Arab terrorists are in the same type prisons. This Act, which will be overturned with help from the ACLU and others as it violates freedom of speech, etc., now has led to an animal rights activist being put on the 10 most wanted posters, his face next to Bin-Laden sympathizers, as he is labelled "vegan" as if that was a dirty word. Shame on Obama for not fixing the mess up Bush left in Homeland Security.

Published by Thriftbooks.com User , 12 years ago
This is a well researched even handed biography of Rod Coronado and the Animal Liberation Front. There is also some information on activities of the Earth Liberation Front. Dean Kuipers has reported on Coronado and other environmental activists for 18 years and that shows. His access to this movement over a long period of time gives him insights that many biographers lack. Kuipers does not present Coronado as any kind of saint. He reports the actions and emotions of both Coronado and of people who whose property was damaged by his vandalism and arson. The book has a real ring of truth to it. I must admit I wonder why the sub-title is "Rod Coronado's War to Save American Wilderness." While Kuipers reports that Coronado cared about wilderness, nearly all of Coronado's criminal acts, which are the core of the book, were focused on saving the lives of captive animals--not on preserving wilderness.

Published by Thriftbooks.com User , 12 years ago
Because we live a rural self sufficient lifestyle I was interested in the book because often those who I call radical environmentalists and radical animal rights people, have no idea what rural or wilderness living entails. And often I notice they don't shun all meat or leather shoes which makes me see many of them as hypocrites. Not to mention they have no problem with killing the human animal but have no problem with non human animals killing other animals. The feature character Rodney Coronado reminds me in some ways of Christopher McCandless who the book and movie Into The Wild was all about. And the author does more than a decent job of telling the story of Rodney Coronado. And in a fair way.
Copyright © 2020 Thriftbooks.com Terms of Use | Privacy Policy | Do Not Sell My Personal Information | Accessibility Statement
ThriftBooks® and the ThriftBooks® logo are registered trademarks of Thrift Books Global, LLC