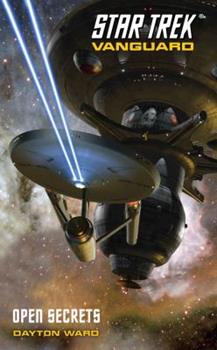 The Taurus Reach is in turmoil. With tensions mounting between the Federation and the Klingon Empire, Ambassador Jetanien works frantically on Starbase Vanguard to halt the escalation toward war. Commodore Diego Reyes, the station's former commander, awaits trial for treason, while the shattered mind of his intelligence officer, T'Prynn, becomes the battlefield in a fight for her very life. But even as matters deteriorate, the discoveries made in...

Published by Thriftbooks.com User , 11 years ago
My order was received quickly and hassle free. Price was good and no shipping with larger order. My book is in perfect condition. Thank you. It is nice to pay for a product and have no worries and everything is done professionaly without problems and stress.

Published by Thriftbooks.com User , 12 years ago
I have enjoyed the Vanguard series more than most recent Trek novels. Great characters, and an intriguing setting. This novel starts the new arc, and as a result a lot of time is spent getting the pieces to the proper places for the rest of the arc. Reinforcing my theory that in most licensed fiction there are only a few dozen people in the universe, we see Admiral Nogura and Carol Marcus. And Kirk and the Enterprise are mentioned a couple of times. The most disappointing thing about the novel is that we don't learn much about Nogura, who has been a shadowy figure since the first Star Trek movie. Overall, a good read, and a good continuation of the whole Shedai saga. And best of all, written with a sense of continuity to the TV series.

Open secrets not that open!

Published by Thriftbooks.com User , 12 years ago
Open secrets continues to tell the story of Vanguard but not by much. Dave mack in my mind does a better job of telling the Vanguard. so ill look foward to his book later this year.

Too Long to Wait!

Published by Thriftbooks.com User , 12 years ago
The Vanguard series is a great concept, set in the same time frame as James Kirk and the original Star Trek, it's about a star base in the distant Taurus Reach, and its secret project, searching for the mysterious Shedai who once dominated the region, and trying to understand the unfathomable technology they left behind. In this the fourth book in the series, the station's commander, Commodore Diego Reyes, stands accused of violating his orders by allowing the secrets of the station and its mission to be leaked to the media. The whole mission grows far more dangerous as Klingons enter the area, hoping to harness Shedai technology as weapons. In the background the nearby Tholians, once slaves to the Shedai, remain hostile, and powerful remnants of the Shedai have awakened. A parallel story takes us to Vulcan, where there are ancient mysteries in the desert and a tie-in to Spock and an episode of the original Star Trek. The nice thing about this volume in particular is that it brings in other elements from this time frame in the original series. The prologue and epilogue refer to Kirk's confrontation with Klingons and the peace imposed by the Organians. And one of the main researchers on the station is Dr. Carol Marcus, with her son by Kirk, David, still a child, but grown up in the film "The Wrath of Khan". On the other hand one of the frustrating elements about placing a series of different adventures in a familiar time frame is the problem of where did it all go? There's very little here that shows up in other Star Trek, which makes sense because those stories were written first. But if the secrets of the Taurus Reach are so amazing, and the technology Carol Marcus is dealing with has such ability to change science, why are there no traces of it, no references to it, in the later Star Trek time frame? Apparently less than century later the mighty and dangerous Taurus Reach has become a backwater, too familiar and too tame to mention. It's very possible that what Carol Marcus learns on Vanguard turns into the Genesis Project of "The Wrath of Khan". The Cestus III outpost mentioned in passing here, site of the original series confrontation between the Gorn and James Kirk, has in the time frame of "Deep Space Nine" turned into the only place in the galaxy where baseball is still played. But where's the rest of it? Were all the adventures we are reading about here for naught? The other frustrating element is the enormous length of time between the publication dates of the books in the series. The previous volume was published almost two years before this book. When you have to wait that long, it's hard to keep track of who is who and what has happened, no matter how hard the author tries to fill in the missing information. Fortunately the wait for the next volume won't be quite so long, as it's due out about half a year after this one. But one does wish Pocket Books could bunch up such an excellent series a little more, especially when each

Published by Thriftbooks.com User , 12 years ago
I had doubts this series could produce an adequate follow-up to the cataclysmic events of "Reap the Whirlwind". That book seemingly resolved major threads and left the lives of major characters forever altered. If the series had stopped there it would have made a nice trilogy. How do you keep the momentum going when it seems you've blown the wad? Somehow, Dayton Ward delivers. As the Federation and Klingon Empire hurtle towards war, Diego Reyes stands trial, T'Prynn fights for her life, and the puzzle of the Taurus Reach gets even more complicated. I won't spoil anything, but if you've read the earlier books this one is a must read. Those who suffered through Ward's last Vanguard outing (Book 2: "Summon the Thunder") likely remember an exciting tale marred by sloppy writing. What a great surprise to find the writing this time out is solid and tight, 100% improvement. There's still a habit of mixing too much exposition with the dialog. But while this was mind numbing in StT, it works a lot better here. It's also worth mentioning that the reams of bad Trekno-quips that littered StT are absent this time. Thanks Dayton. If you're new to Vanguard I'd recommend starting with the 1st book, David Mack's excellent "Harbinger". There's enough backstory provided in OS that you could jump right in here, but you'll definitely miss out on some of this books emotional impact.
Copyright © 2020 Thriftbooks.com Terms of Use | Privacy Policy | Do Not Sell My Personal Information | Accessibility Statement
ThriftBooks® and the ThriftBooks® logo are registered trademarks of Thrift Books Global, LLC