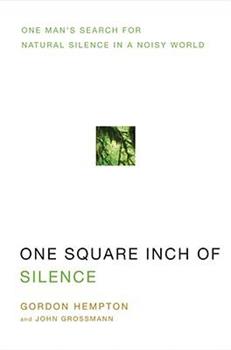 One Square Inch of Silence: One Man's Search for Natural Silence in a Noisy World [With CD (Audio)]

by John Grossmann and Gordon Hempton

In the visionary tradition of Rachel Carson?s Silent Spring, One Square Inch of Silence alerts us to beauty that we take for granted and sounds an urgent environmental alarm. Natural silence is our nation?s fastest-disappearing resource, warns Emmy-winning acoustic ecologist Gordon Hempton, who has made it his mission to record and preserve it in all its variety--before these soul-soothing terrestrial soundscapes vanish completely in the ever-rising...

Published by Thriftbooks.com User , 13 years ago
I am a big fan of silence. I hope this catches on so that parks and conservation areas will designate quiet zones. We miss so much by blaring through our lives. I hope everyone takes a moment to listen to the "sounds of silence".

Published by Thriftbooks.com User , 13 years ago
As an avid hiker living in an urban area, I'm well acquainted with the need to get away from all that noise! However, Gordon Hempton showed me that I'm far from alone in this, or with being annoyed with the intrusion of human-based sounds on the last remaining vestiges of true quietude in the wilderness. Hempton took a road trip in his "Vee-Dub" from Washington state to Washington D.C. to lobby for protection of quiet places. While on this trip, he searched for some of the few quiet places left over, taking with him a small stone that marked his One Square Inch of silence in wild Washington. The book chronicles not only his experiences in the great outdoors (with ample descriptions of the soundscapes he encountered), but the people he met along the way, as well as a wealth of information on everything from his occupation as a recorder of sounds to the impact loud noises have on wildlife. Even airplanes thousands of feet up have a negative effect. Additionally, the appendices include hands-on information for those wishing to cut down on the immense amount of noise pollution, as well as correspondence between the author and assorted personae regarding policies and philosophies. They're a worthy addition to Hempton's journey. This is a truly fascinating book, both for the environmental messages, but also for pointing out just how much we don't pay attention to what we hear on a daily basis. In a world increasingly stuck to its iPods, we rarely, if ever, remember to just stop and listen. This is an excellent reminder to take a moment.

Thought-provoking quest for a quieter world

Published by Thriftbooks.com User , 13 years ago
If you've ever wished you could get away from it all, or moaned that it's so loud you can't hear yourself think, this is the book for you. Gordon Hempton might be neurotic and obsessive, but that's the kind of person it takes to tilt against windmills - in this case lobbying to try to establish one square inch of silence deep inside Olympia National Park. In a cross-country journey from Hempton's home near the park to Washington, D.C., and meetings with FAA and National Park Service officials who could, at least theoretically, grant his request, he and his co-author, John Grossmann, write beautifully about the beauty of silence and natural, non-human-generated sound - and the horror of modern noise that has become the grating soundtrack of our lives. As they point out in a surprising chapter entitled, "Toxic Noise," that soundtrack isn't just unwanted aural racket, it's hazardous to both humans and wildlife. Indeed, Hempton and Grossmann know the science of sound as much as they know its subtle ambiences. Once you've read "One Square Inch of Silence," you'll become much more aware of all the unwanted noise around you that we've all come to take for granted. Thankfully, Gordon Hempton never will.

Published by Thriftbooks.com User , 13 years ago
This book is one incredible nature hunt, Travel thru many National Parks, and thru lots of the country, as the author checks noise levels nearly everywhere. This book should be a classic, and it is one of a kind in analyzing noise of all kinds. My only minor (maybe major) quibble is he does not note the horror show of "music" (so-called) tagging along in nearly every commercial place, including banks, markets, etc. Still, an amazing achevement by this great author!

One Square Inch of Silence: One Man's Search for Natural Silence in a Noisy World

Published by Thriftbooks.com User , 13 years ago
"One Square Inch of Silence" tells an enchanting tale of man's honest search for silence. Rarely observed by some, the author brings forth a conscious awareness of aural effects in the United States. It is said that he, "listens to the world, which is his job and passion as an acoustic ecologist." The book reads somewhat like a journal. The author travels partly by vehicle and also by airplane. He measures noise in certain areas using a sound meter along the way, and records findings throughout the text. Although not perfectly clean cut, its topic is fruitfully valuable for those interested. The story begins in our beautiful hometown of Washington State and journeys across 12 points to Washington, DC. Olympic National Park is the starting point. Early chapters reference hope that governments will protect the park and similar places from human blares (i.e. airplanes, radios, machines, etc) in the future. The writer's expedition reminds me of early crusaders, whom had high hopes of eliminating secondhand smoke in public spaces before finally conquering. Air, water, light, or sound-polluted cities are certainly not for everyone, and these writings reflect that. Similar to secondhand smoke, oppositional silent folks may be unfairly subject to noisemakers. However, it may prove difficult, although workable to regulate noise in certain environments for societal equilibrium. Rural communities in their polarity exist for those whom prefer less human pollution. In fact, psychologically speaking, some individuals appear to enjoy noise. Many can also be observed by how they mandate perpetual music, television, or other sounds in their environment, instead of silence. The question is: Should NOISE or noisemakers be forbidden from certain places on earth, and whom would enforce such regulations? The heart of Hempton's writings (p.212) references, "There is a growing evidence that noise pollution is not merely an annoyance; like other forms of pollution, it has wide-ranging adverse health, social, and economic effects...As the population grows and as sources of noise become more numerous and more powerful, there is increasing exposure, which has profound public health implications. Noise, even at levels that are not harmful to hearing, is perceived subconsciously as a danger signal, even during sleep. The body reacts to it with a fight-or-flight response, with resultant nervous, hormonal, and vascular changes that have far reaching consequences. I agree with this text in terms of its awareness and informative mission, and think it will serve to enlighten readers and noisemakers alike.
Trustpilot
Copyright © 2022 Thriftbooks.com Terms of Use | Privacy Policy | Do Not Sell My Personal Information | Cookie Preferences | Accessibility Statement
ThriftBooks® and the ThriftBooks® logo are registered trademarks of Thrift Books Global, LLC