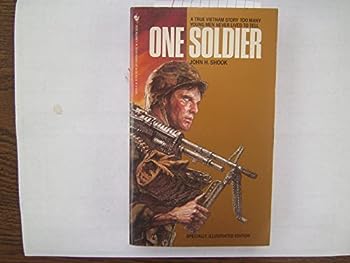 Paperback is memoir of soldier who fought in Vietnam. This description may be from another edition of this product.

Published by Thriftbooks.com User , 19 years ago
"One Soldier" immediately caught my interest. Considering that the author tells about his own on-the-ground war experiences in Vietnam, he shows very little emotions, other than his frustrations, which he tells with subtle humor, about the insanity of being there. I felt that I was with him at all times but without having to experience war traumas, and for this I am thankful to the author. The ending states that he was in the process of writing another book. Since I have not been able to find it, I've been wondering what happened to John Shook.

Published by Thriftbooks.com User , 19 years ago
This is an autobiographical account of a US soldier in Viet Nam, and how he struggled every day to protect his life and sanity. It is written like a diary in that it is very complete and detailed. He managed that by taking notes of his experiance and sending them home. The result is a very clear picture of his experiance, frustrations, danger, victories, etc. He shows us the little details of daily life that are missing from most Viet Nam biographies. This is a fascinating read and very hard to put down, kept me up at night to read more....

Intriguing, Everyday Account of War From an Everyday Soldier

Published by Thriftbooks.com User , 20 years ago
What puzzled me about "One Soldier," John H. Shook's autobiographical account of his experiences in the Vietnam War, was that it wasn't as popular or widely praised as other famous war-autobiographies (such as Ron Kovic's "Born on the Fourth of July"). I found myself unable to put this book down. Shook begins telling his story from the very moment he receives a draft letter and takes us to boot camp, to Officer Candidate School, and then to the dense, hellish jungles of Vietnam, all without turning his story into one big cliche`. I felt like I was having an intriguing conversation with a veteran, hearing his story, being able to understand where he was coming from. A flawless accomplishment. It's disappointing that Shook's "One Soldier" isn't as highly praised and recognizable as other war stories.

Published by Thriftbooks.com User , 22 years ago
Having read many books on the Viet Nam War, I can honestly say that none affected me like this book. Through Shook's own eyes, you see the true ugliness of war.

A Vietnam book worth reading

Published by Thriftbooks.com User , 23 years ago
Although I haven't read much about war in Vietnam, I saw a lot of documentaries and movies in general and none of them left such an impact on me as this book did.
Trustpilot
Copyright © 2022 Thriftbooks.com Terms of Use | Privacy Policy | Do Not Sell or Share My Personal Information | Accessibility Statement
ThriftBooks® and the ThriftBooks® logo are registered trademarks of Thrift Books Global, LLC