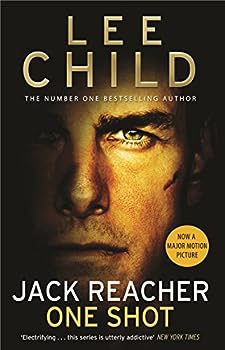 Published by Deanna , 4 months ago
Some of my favorite books of all time. I have truly enjoyed reading these!

Published by Thriftbooks.com User , 17 years ago
Lee Child's main character, Jack Reacher, is the modern day equivalent of a gunslinger. The idea of a man of honor, who served honorably and well in the military of his country, coming back to roam the country unfettered by traditional lifestyles or bonds....well, it makes for compelling plotting (and takes me back to my childhood, with all those westerns in black and white). I've been a fan since the beginning of this series, despite Child's early lack of in depth research and some significant editing problems. In this, Reacher's 9th outing, the newest book, "One Shot", Child serves up more delicious action as Reacher is drawn into a small city incident of what appears to be terrorism. The sniper shoots and kills six people. He takes few pains at hiding his identity, and he's picked up in a police probe that is a slam dunk. The evidence against him is so compelling that only his sister holds out any hope for the fact that he is innocent. Reacher doesn't want to save him. He arrives on the scene to cement the thought that the man is capable of such an act, citing an earlier act of conduct while in the military that seems to echo in the current shootings. But it doesn't take long for Reacher to become uncomfortable with the circumstances, and with the clumsy efforts of some force, some unknown powers who are framing the sniper and running scared that Reacher will find out. The climax of the story is without parallel, and, once again, Reacher compels the reader by both his various "tough guy" idiosyncrasies and his ability to extricate himself and others from tense and action packed situations. Now, don't get me wrong, the villains in question are way over the top, both in their plotting and in their identities and foibles. That's pretty much stock in trade for the foes that Reacher comes across in his pursuit of living an anonymous life of a crime buster in these United States. And while Child won't win any awards for his prose, he is, without a doubt, a master of mounting tension and that ephemeral quality of writing so compelling that the book can't be put down. One of the best in this nine book series, you'll enjoy "One Shot" whether you've run across Reacher before, or not. If you haven't read the series, this book may lead you to do just that. Enjoy!

One Shot - Sure Hit

Published by Thriftbooks.com User , 17 years ago
If there is a contemporary writer offering more thrills than Lee Child, and a hero more compelling than Child's Jack Reacher, I've yet to find it. "One Shot", the ninth installment in the Reacher series, is another hard-hitting mystery/thriller true to Child's lean, unembellished style. A few seconds of seemingly random violence from a sniper's puts an unnamed midwestern city in panic. But impeccable police work has the perp in irons within the day, as the forensics lead to Army vet (and former Desert Storm sniper) James Barr. Barr's one request: find Jack Reacher - he'll prove my innocence despite what appears to be a slam-dunk case for the prosecution. The story unfolds, unveiling a prior history between Barr and Reacher, while the intially straighforward case becomes yes certain. So engrossing is the mystery that the hardcore Reacher fan may overlook the fact that almost 100 pages have turned before Reacher actually hurts anyone. Momentum builds steadily, taking a few twists while leading to an unforgettable climax guaranteed to knock your socks off. So while there may be nothing extraordinary about the basic plot - it's been done in a million variations - what is extraordinary is the visceral appeal of loner Jack Reacher - the ultimate cross between Clint Eastwood's `man without a name" and Sherlock Holmes. Reacher is justice personified, an irreverent avenging angel who shuns all material possessions in exchange for total independence. Also extraordinary is Child's ability to tell spin a yarn in clear, concise, stripped down prose that keeps the story clean, the dialogue lean, and the pages turning. You'll get no ambiguity from Child (or Reacher, for that matter): black and white, good and evil, and when there is evil, dispatch it quickly and brutally. In short, "One Shot" is about as good as action fiction gets. The only drawback is that Child only writes one novel a year - it's a long wait till the next rush.

It's already "shot" to our ten LIFETIME BEST list !

Published by Thriftbooks.com User , 17 years ago
We've read all eight of the Jack Reacher books and absolutely love this singular character. And in "One Shot" we found one of the best books we've ever read -- how's that for high praise! First, Reacher is perhaps the best new leading man of this decade: as smart as Nero Wolfe; as honest and personable as a Dick Francis hero; and as physically fit and resourceful as Arnold Schwarzenegger, with the type of will that enables him to break a bad guy's neck without a second of indecision. Second, Child has created a plot with such gripping suspense, we stayed up till 3 a.m. to finish this -- we can't even remember the last time we were up much past midnight! And the supporting cast, including two women, were so appealing, with characters crafted so well, we'd almost like to see more of them as well. The story gets off to a hot start when a sniper mows down (with six rifle shots) five random people innocently leaving their place of work. The guy seems to have expertly planned his attack, yet leaves behind such a wealth of forensic evidence that even a CSI rookie could have followed the trail and snagged the killer, as did the local Indiana small city cops just hours later that night. The arrested man, James Barr, who turns out to be a Gulf War Army sniper, says almost nothing, but finally denies his guilt and asks for Jack Reacher. Reacher hears about the deed on national TV and sets out for the town before he knew he had been tangentially involved. Meanwhile Barr gets almost killed in prison overnight and is in a coma in the hospital. When Reacher shows up and sees the case from the police side, he is also convinced it's open and shut -- and we're left wondering where this is all going. Answer -- into one great story that tracks down the truth from the tiniest of inconsistencies, with little more than caring people to keep the search going strong. When Reacher gets hit on by some bad guys after a setup from a cute townie girl, and then the girl gets brutally offed, he's in the game for good now; and as usual, enraged enough morally to relentlessly chase -- mostly on foot (he doesn't own a car or anything else for that matter!) -- the villains. Finally, it may be that a crooked cop or DA (the defense lawyer's father of all people) may be part of the problem, only adding to the tension! Cap this off with a fabulous ending that leaves everybody happy and satisfied, especially we readers, and what more can we ask for in a novel! We rarely effuse to this extent about a "mere" thriller, but Lee Child has written a truly great book -- one that grabs our hearts and minds, keeps us involved as the pages fly by, and rams home several hours of first class entertainment. For fiction fans, THE MUST READ OF THE YEAR !!

Reacher is back and better than ever!

Published by Thriftbooks.com User , 17 years ago
This is Jack Reacher at his best! Six Shots and five people dead in an American midwest city. The police catch the sniper, the only problem is the guy claims he did not do it. In come Reacher and in his indominatable way he turns the case inside out and upside down. The Jack Reacher character is brilliant, multi-layered, but most of all, he kicks ass when he needs to and always gets the girl. One Shot was extremely well written, suspenseful and twisted and turned like all his others, but I think the characterizations of Reacher in this one is probably not as deep as in the previous book, but for a plot driven thriller, it's five stars all the way. Nothing is as it seems in this gritty thriller.

One Shot is one terrific novel

Published by Thriftbooks.com User , 17 years ago
Lee Child's ninth Jack Reacher story begins not with one shot, but with six. A sniper has opened fire on office workers in an Indiana town, leaving five dead. The local police force, through extraordinarily meticulous detective work, finds their man. They have mounds of evidence, the local prosecutor is delighted, the problem is solved. But when they interview the suspect, he says only two things: "You have the wrong man"; and "get Jack Reacher". And the problems are just beginning. First, it's no easy task to "get Jack Reacher". A former military policeman, Reacher has left the Army for a life of wandering; he has no ties to any place or any person - it's not that simple, even for the police, to find a man who has no address, no phone, no tax records. In this case, however, Reacher is already on his way to Indiana; he's seen the news reports of the incident and has his own reasons for wanting to talk to the prisoner. And that's the second problem; from the moment Reacher arrives in Indiana we, and everyone else involved, discover that nothing is as it appears. And Reacher, as always, is determined to do the right thing at any cost. From the first paragraph to the last, this book is a thrilling ride, containing all the wonderful elements readers have come to expect from Lee Child's writing: meticulous plotting, riveting action, unexpected humor, and of course, Jack Reacher - one terrific hero.
Trustpilot
Copyright © 2022 Thriftbooks.com Terms of Use | Privacy Policy | Do Not Sell or Share My Personal Information | Accessibility Statement
ThriftBooks® and the ThriftBooks® logo are registered trademarks of Thrift Books Global, LLC