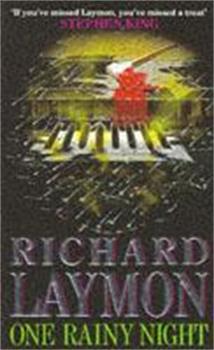 This description may be from another edition of this product. The strange black rain falls like a shroud on the small town of Bixby. It comes down in torrents, warm and unnatural. And as it falls, the town changes. One by one, the inhabitants fall prey to its...

Kept me on my toes!!

Published by Thriftbooks.com User , 2 years ago
Mysterious and suspenseful! I love how I felt I was in the book from all the details. Well worth the purchase.

A Thrill Ride of the Highest Caliber

Published by Thriftbooks.com User , 17 years ago
I wasn't really enthused about this book after reading the first chapter. I actually put it down for a couple of days which is unusual for me. But boy oh boy when I picked it up again, it grabbed me and wouldn't let go. A black rain is turning ordinary people into homicidal cannibalistic maniacs (think Living Dead). Only those who get wet are affected so the folks who were inside when the rain started have to do whatever it takes to survive the night. And the ending is a real original. Don't miss out on the thrills of this one!

Published by Thriftbooks.com User , 20 years ago
Laymon was one heck of storyteller, I have to say that. His tales move so fast that it is almost too easy to skip over the important plot details, which I guess happened to a few of the negative reviewers here. All the plot holes seemed to be filled to me. The reason for the rain is made abundantly clear and the overcoming of the psychosis (which simply entails washing the black fluid off of the victim) happens to more than just one character in the book and certain character's awareness of, and ability to fight off, the rain's seduction to violence seems to depend more on the character rather than the situation.All in all One Rainy Night is a brisk, blood curdling b-movie of a read, the literary mirror of George Romero's The Crazies (aka Code Name: Trixie). This was the first Richard Laymon novel I have read and will certainly will not be the last. I have become a fan for life.

Published by Thriftbooks.com User , 21 years ago
This story, like many of Laymon's stories, begins with a simple premise and rollercoasters from there! Mysterious rain follows the brutal murder of a Black high school student. Is there a connection? Whomever the rain hits gives in to violent, murderous impulses, regardless of age, gender, or temperment. It's a fascinating story as Laymon taps into primal fears of mob violence, the uncertainty of strangers and the urge to act on one's impulses. Contrary to some of the other reviews on-line here, his plot is logical and his prose is gripping. This is one author that uses visual imagery so intense that the reader is struck thinking, "What kind of a person could think of something like that?" His characters as well are flawed, just like the rest of us, and face horrible situations/tribulations they must overcome in order to survive. Laymon is one of the few authors who will get you to care about a character, then viciously kill them off later. Heroes don't always make it to the end, neither do the villains. It makes for good reading from sheer unpredictability alone. If you have never given Laymon a try, pick up a copy of this book. You won't be disappointed, although you might find yourself avoiding strangers the next rainy night...

Published by Thriftbooks.com User , 21 years ago
Having read this novel last year as an import, I was thrilled to see it on bookshelves here in the US. This book is an excellent example of the writing abilities of this author. "One Rainy Night" opens with the murder of a black student by a bunch of rednecks. Shortly thereafter the small town is plagued by black rain that continues to fall without end. The townspeople who are exposed to the black rain find themselves becoming increasingly violent towards each other. Within a couple of chapters the whole town has become insane. Killings are rampant as decent people turn into maniacs. At every junction where people meet there are attacks. The violence is extremely brutal and raw. What makes it even more disturbing is that all the acts are completely realistic. Laymon has a way of exposing mankind's ugly side that would make even the most hardened reader cringe. This is not gratuitous gore like you find in a lot of hack horror novels but a glimpse at what happens when good people give in to their animal nature. Another distinction in Laymon's writing is that he takes the conventional roles of hero, victim, villain and completely turns them around. It is not uncommon for the hero to become a victim, for the victim to become a villain and so on. In Laymon's books heroes sometimes die and villains get away. The battle between good and evil rages on, often within one character. The character's in this book are real people forced into the most extreme of situations with shocking outcomes.Without giving away too much of the storyline, I must add that the ending was a big surprise. The twists and turns that occurred within the story kept me guessing through the end. The book was a fast, action packed read that pulled no punches. I highly recommend it but be warned it is not for the faint of heart.

The essence of Laymon

Published by Thriftbooks.com User , 21 years ago
ONE RAINY NIGHT is the quintessential Laymon novel. If you had to define the essence of Richard Laymon in just one book, ONE RAINY NIGHT probably does it. Brutal, uncompromising and fast paced, ONE RAINY NIGHT tells it like it is. There are no passages of comfy prose, no time to catch your breath. ONE RAINY NIGHT is set in a world gone mad and Laymon captures that chaos beautifully. Watch out especially for the restaurant scene which is one of the best desperate situation scenarios that I have ever read.
Copyright © 2020 Thriftbooks.com Terms of Use | Privacy Policy | Do Not Sell My Personal Information | Accessibility Statement
ThriftBooks® and the ThriftBooks® logo are registered trademarks of Thrift Books Global, LLC