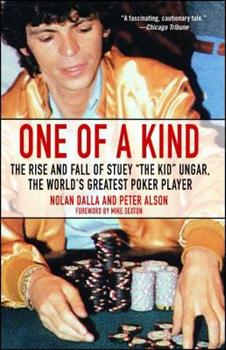 One of a Kind: The Rise and Fall of Stuey ', the Kid', Ungar, the World's Greatest Poker Player

by Peter Alson and Nolan Dalla

Now in paperback comes the first and authorized biography of Stuey Ungar, the greatest card player of all time, who was backed by the Mob in New York before moving to Las Vegas where he won the World Series of Poker three times, then died mysteriously in a seedy motel on the Vegas strip at the age of 45. He was the Jim Morrison of the casino, a legend before he was of legal age. Stuey Ungar, the son of a Jewish bookie on Manhattan's Lower East Side,...

Published by Thriftbooks.com User , 16 years ago
One of, if not, the best book i've read. A huge fan of poker and Stu Ungar. I enjoyed every minute of this book, cover to cover. To go insdie the life of Stu Ungar from his worst times to his best times only made me want to learn more and turn more pages but it gave a greater perspective on the poker world back in the 80's. Nolan Dalla and Peter Alson did an amazing job on this book and anyone who is a poker fan and knows about Stu Ungar should definitely pick this book up.

Published by Thriftbooks.com User , 16 years ago
This is a tough writing assignment. Two great writers, Nolan Dalla and Peter Alson, are more than up to the task, and solve it brilliantly in a chronological, well-researched, smooth-reading biography of the famous gambler. Most of the things that can go right or wrong in a life happened to Ungar. This book captures the sights and sounds his era in an entertaining fashion, and is likely the best glimpse we will ever have into the mystery of Ungar, one of the great poker players of his age. Larry W. (Wayno) Phillips, author of "Zen and the Art of Poker"

The Fire that Drives Also Destroys.

Published by Thriftbooks.com User , 16 years ago
I recall that Jim Mcmanus, in his book on the World Series of Poker, mentioned that Stu Ungar was someone with a life truly in need of exploring, so I was pleased to find out about the existence of this book. I ordered it the minute it was released. I could not be more pleased with the purchase. Its pages flow like frames in a motion picture. I could not put the biography down. This is a tribute both to the professional writer employed, Peter Alson, and also to the ornate texture of the life it documents. Stu Ungar was a thoroughly compulsive, brilliant man who was given many gifts that he, with unprecedented impatience, smoked away through the tube of a crack pipe. There was no "could have been a champ" with Stuey though. He won The World Series of Poker three times and was victorious in 381 competitions overall. His memory was photographic and his mind a spinning computer, yet it was his ever-present need for instant gratification that finished him. A lack of concern for money was his greatest No Limit characteristic, but it was also his biggest weakness as he blew millions on sports betting, the ponies, and every other proposition put before him. Ungar was a man of total contradictions. He loved being a father and cared intensely for his daughter and stepson, yet he disappeared for weeks at a time and could often not be reached when they needed him. Stuey lived for competition but allowed drugs to cause him to skip the 1998 WSOP and sleep through the last two days of the 1990 one. He could be charming and entertaining but had few social graces. This genius had parts which canceled out his whole. The book succeeds at many levels. We feel tremendous sympathy for the main character, but wonder what more any single person could have done to save him. The finest of the poker players are emotionally non-responsive at the table and possess "alligator blood." However, with Stuey, they brought misery upon themselves in the hopes of diverting him from his inevitable destruction. Doyle Brunson let him move in with his family in El Paso, while Mike Sexton, the same cheeseball who provides color for the World Poker Tour, paid Ungar's hotel bills time and again just so his friend would have a place to live. Chip Reese had written him off, but, finally, as Ungar sat in a jail cell, he pulled out 55 C notes to secure his release. Stuey Ungar had more talent than practically anyone else on this earth, and being rich should have been a sure thing, but his love of life never equaled his lust for action. He died by his own hand even if the coroner's report said otherwise.

An Amazing Tale of a Strange Life

Published by Thriftbooks.com User , 16 years ago
It seems to be that a person that is the best in the world at one thing often has to pay for that skill by having gross failures in other areas. And that is certainly the case of Stuey Ungar. At card games like gin rummy and poker he was the best of the best. Stuey was the Babe Ruth of high stakes poker. During his life he won perhaps $30,000,000, no one knows for sure. Yet at the same time he had more than his share of tragedy. In the end, his life style killed him at age 45. Drugs played a major part in his death, not as the killing agent, but as part of what ruined his heart. This book is a biography, but more that that it is almost a tribute that covers his failures but stresses his successes. It was begun before his death as an authorized biography. Stuey himeslf was interviewed several times, and his ex-wife and daughter likewise assisted in telling the story. It is amazing, in our world that a life like this can be lived.

Published by Thriftbooks.com User , 16 years ago
Stu Ungar's legend transcends poker: he won the world championship three times (the third more than a decade and a half after the second and when he was regarded as a has-been or curiosity) and was supposedly an even BETTER gin player. He had a genius for games that was almost unfathomable. Then, just a year and a half after his greatest triumph, he was dead. Nolan Dalla and Peter Alson have big-league credentials as researchers and writers of a story about a broken genius of cards. Among other things, Dalla is the media director for the World Series of Poker, can get in touch with ANYONE connected with poker, and interviewed Ungar several times before his death in 1998. Dalla has papered poker publications and web sites with excellent accounts. Alson wrote a highly-acclaimed book about his days as a bookie at Harvard and has written for a writer's wish-list of men's magazines. Their account is so intimate that it's almost uncomfortable. I say this as a GOOD THING! Ungar was very private, closed even to most people in the poker world, and not a frequent interview subject. This was especially true regarding the two things we'd want to know about: his genius at cards and his self-destruction. Dalla interviewed him before his death and the periodic first-person accounts by Ungar are fascinating and shocking. In addition, the higher echelons of poker (especially where organized crime figures are possibly near, as they were in Ungar's early days and, socially, later on) can be a closed world. Even though men like Mike Sexton and Doyle Brunson are public figures, you would not expect them to be frank about their tragic friend, or about matters potentially at odds with poker's relatively recent, relatively wholesome reputation. But Dalla and Alson got the inside accounts from Stuey's closest friends and even those shadowy mobsters. They also obtained the story from Ungar's ex-wife and daughter; again, invaluable sources you'd expect would be difficult to get. Stu Ungar's life story is fascinating, no matter how it is told, so the authors are starting with a good hand. From a research perspective, there can be no more authoritative work on the man. But it is the writing and story telling that REALLY shine. The authors weave together Ungar's first-person accounts with the stories of their many sources in a way that is seamless and compelling. Ungar's essential mystery remains, but the authors allow us to experience the key moments of his bizarre life, always knowing what he's up to and why. At the risk of mixing metaphors, Ungar lived a roller-coaster life that came to a train-wreck end. The story, ultimately, is a sad one, but it is a thrilling ride for the reader.
Trustpilot
Copyright © 2022 Thriftbooks.com Terms of Use | Privacy Policy | Do Not Sell My Personal Information | Accessibility Statement
ThriftBooks® and the ThriftBooks® logo are registered trademarks of Thrift Books Global, LLC