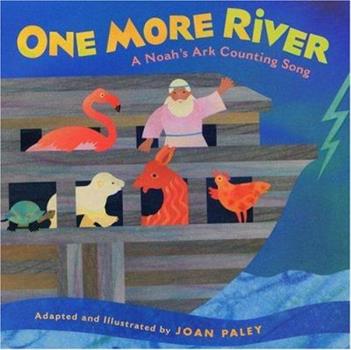 Published by Thriftbooks.com User , 17 years ago
This very colorful counting book tells the story of Noah and the Ark, borrowing heavily from an old spiritual rather than the somewhat fearful Biblical account. Instead of the flood's moral complexities, illustrator Joan Paley's introduction simply tells readers that there are "many days and nights of rain." This is an excellent approach for those needing only a secular version. The spiritual's lyrics (the books shows the musical notes as well) are as follows: "Old Noah built a great big Ark, There's one more river to cross. He patched it up with hickory bark, There's one more river to cross. One more river, and that's the river of Jordan. One more river, There's one more river to cross." In her adaptation, Joan Paley changes the first two lines to describe the varying types and numbers of animals entering the Ark; for example, above a two-page picture of two hopping kangaroos (with the number `2' in the corner), she writes: "The animals went in two by two, There's one more river to cross, "Let's hop right in," said the kangaroo, There's one more river to cross." Similarly, three bears, four bulls, five llamas, six monkeys, seven flamingos, eight aardvarks, and nine turtles ("in slow green lines"), and ten hens arrive at the ark, and they safely cross the river Jordan and land "on Ararat." Paley specializes in collages, and these boldly colored collages of large foreground animals were constructed from paper shapes colored with watercolors, crayon, pastel, colored pencils, and oil paints. In an unusual bit of puffery, the publishers choose to inform us that "the layered shapes create a three-dimensional effect." The overlays of scribble-scrabble crayon, pastel, and pencil give the otherwise very professional drawings an appealing look, as if a child prodigy drew them, but the effect is texture, not dimension. If anything, since the emphasis is so focused on the foreground, the perspective is fairly flat. Not until the last page do we see a more conventional presentation of fore-, mid-, and background. The writing is appropriate for the toddler age group, with a hint of humor ("Noah laughed at the monkey's tricks," above a spread showing them swinging on a branch; an elephant "chewing a honey bun" --to rhyme with "one by one"), but sometimes it's fairly mundane, and, at worse, a bit forced: "Five fluffy llamas did arrive." Still, the link with the spiritual and the big, bright animal pictures provide ample opportunity for classroom or playroom sing-along counting fun.
Trustpilot
Copyright © 2022 Thriftbooks.com Terms of Use | Privacy Policy | Do Not Sell My Personal Information | Accessibility Statement
ThriftBooks® and the ThriftBooks® logo are registered trademarks of Thrift Books Global, LLC