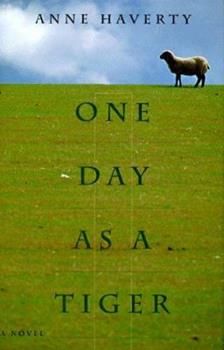 One Day as a Tiger: A Novel

Martin Hawkins, a brilliant young historian, turns his back on his academic career and returns home to the family sheep farm. It is here that Missy, a sheep that has been "improved" with the introduction of human genes, begins to make a significant impact on his imagination.

Published by Thriftbooks.com User , 18 years ago
Marty Hawkins, on his way to being a gifted scholar at Dublin's Trinity College, seems to be suffering a delayed reaction to his parents' tragic death. Giving up his fast track career in the history department, Marty returns home to the family farm in Fasha, County Tipperary, run by his brother, Pierce, and sister-in-law, Etti. Marty's desire for a simple rural life puts him at a loss on how to fill his days besides occasional farm chores and the weekly night out at the local pub. Pinning for his sister-in-law, Etti, and a good-natured rivalry with Young Delaney, a boyhood friend, seems to be the only things keeping him going until he comes in possession of a genetically altered sheep he names Missy. This was a most unusual book and very enjoyable. The author gives us a wonderful portrayal of rural Ireland and its vanishing breed of small farmers. We are treated to an assortment of characters in the village of Fansha, from the sister-in-law from the wrong side of the tracks and almost too perfect brother, to the hard working Young Delaney, who is the envy of the countryside for his skill with livestock. Other families seem less industrious than Pierce, settling for modern homes and satellite dishes, in lieu of the traditional country values. Marty's emotional decline is sad and pathetic, risking everything for a chance with his sister-in-law. A delightful story of obsession and the consequences, but perhaps most memorable for the wonderful portrayal of a tiny corner of modern Ireland, which still retains the rural charm that we think of, and a whole array of unforgettable characters.

Published by Thriftbooks.com User , 21 years ago
A sheep? The novel is about a sheep? If someone had told me this novel is by an Irish writer and it features a sheep, I probably would have dismissed the book. I think myself relatively free of prejudice, yet "Irish writer" says to me folk story, featuring salt-of-the-earth characters and a warm, triumphant ending. How wrong I would have been to suspect Haverty of writing such a book, and how glad I am that I did not take the time to discover her heritage before buying and reading this amazing book.The novel follows Marty Hawkins as he leaves his promising career at Trinity College in Dublin to go home to the country, to live for a time with his brother Pierce, who tends the family acres with an understanding and closeness to the land that Marty knows he will never have. Marty is perhaps driven to this desperate move away from intellectual pursuits by a kind of rivalry with this brother, or by the death of his parents, or, by his own admission, because he missed the look of the land. It was never quite clear to me why he left Trinity, except that he felt something was wrong. And in the end it doesn't particularly matter. We all do things that we cannot fully explain. I like that about this book.Followed everywhere by the specter of this larger-than-life relative, the brother who can do no wrong, Marty seeks peace by doing nothing. He makes himself a home in an abandoned house on the land, makes half-hearted efforts at helping Pierce, finally accepts his hermit-like existence. But he has an obsession with Pierce's wife Etti. And an equal fascination with a sheep. Marty finds the sheep when accompanying his progressive farmer brother to a sale of genetically-engineered livestock. The sheep carry human genes. The sheep Marty picks out has a kind of human frailty that calls out to him, that he cannot resist. Pierce humors his non-farmer brother by acquiring the sheep for him for half-price.And so Missy enters Marty's life. And changes it forever. Missy seems to represent the unformed, unclear direction of Marty's life, its demands on him and his inadequacy at satisfying his own needs, or even defining them. Marty struggles with keeping her alive, with alternately loving and hating her, as he seems to do with his own soul. He expresses - and sometimes fights - the too-human traits of envy, lust, and desire, and is ultimately undone by his need to have what he wants on his own terms. The novel is too real to be put down easily, too human to dismiss.

Published by Thriftbooks.com User , 23 years ago
What a wonderful book! Once I started reading it, every moment spent away from it was a trial! All I wanted to do was get back to it and find out what happened next! While this may not be a book that ends "happily ever after", it does make us painfully aware of the poignant and tenuous nature of life and how unspeakably sad it can sometimes be. We identify with Martin at the same time that we abhor his sometimes thoughtlessly cruel behavior towards Missy. Etti's limited intelligence, and the fact that she is aware of it, makes us feel protective towards her and we are also moved by Pierce's love for his brother and for Etti. But finally it is Missy who moves us unbearably - we are left with an image of this totally helpless being, dependent on the whims of whoever deigns to look after her, however imperfectly. We may well ask the question, "Why was she born?" This story is a real tragedy, complete with catharsis. As for the writing, Anne Haverty is a wonder - her descriptions of nature are marvellous and the wry Celtic humor to be found in the story makes us smile but it is, above all, her ability to move us that makes her stand out from the crowd. The only writer I can compare her with is Patrick McGinley, a favorite of mine whose books are, unfortunately, mostly out of print these days. The reader who asks what the title means must have missed the quotation at the beginning of the book.
Copyright © 2020 Thriftbooks.com Terms of Use | Privacy Policy | Do Not Sell My Personal Information | Accessibility Statement
ThriftBooks® and the ThriftBooks® logo are registered trademarks of Thrift Books Global, LLC