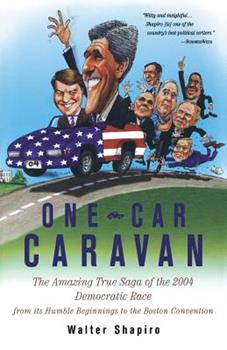 One-Car Caravan: The Amazing True Saga of the 2004 Democratic Race from Its Humble Beginnings to the Boston Convention

By the time most Americans see the presidential candidates on the campaign trail, they are practiced performers surrounded by a platoon of staffers and a brigade of reporters. But on their initial forays into Iowa and New Hampshire in 2002 and early 2003, their entourages were decidedly unpresidential--just an aide or two, perhaps a local reporter, and the candidate himself. Their motorcades were literally one-car caravans; their campaign stops, small...

An comfortable look into the 'Invisible Primary'

Published by Thriftbooks.com User , 17 years ago
Shapiro does an excellent job covering a topic that is complex and straught with emotion, but doing so in a way that is neither biased or hard to read. It's been mentioned already that he is a stand-up comedian, and that really shows in his writing. It's engaging and insightful. It gives depth into character traits of the Democratic candidates. And although I'm not a fan of any of them, it made me feel like I could relate to them and understand where they were coming from and what they were struggling with. Highly recommended.

Published by Thriftbooks.com User , 18 years ago
This book provides excellent and entertaining background on several of the leading 2004 democratic presidential candidates. The author believes there is much to be learned from the "invisible primary" period of 2002 and early 2003, because the candidates were much more accessible and they spoke much more candidly. However, politics moves quickly. At the time the book was written, the modern Internet based campaign of Howard Dean had not taken off yet. Also, the book did not capture the late entry of Wesley Clark. So, by the time you get to read this newly released book, it will be more a piece of recent political history, than any plausible prognostic on the likely democratic nominee. This should not detract much from the valuable background on the candidates and the changing dynamic of presidential campaigning. The author very user friendly lively narrative written style reflects his background as one of the U.S. premier political journalist and writers. If you are a politics aficionado, you will love the book.

The Process of Candidacy...

Published by Thriftbooks.com User , 18 years ago
I didn't finish Walter Shapiro's "One-Car Caravan" feeling that my vote in the 2004 Democratic Primary would go to a different candidate, but I did finish it feeling I had a better grasp of who each of the 'major' candidates were as people - and maybe feeling a little more comfortable in the thought of what would happen if any of the candidates that make me nervous get the nod.Shapiro's book covers the five 'major' candidates of the 2004 Democratic Primary Election: Dean, Edwards, Gephardt, Lieberman and Kerry. To a lesser extent it also tackles Bob Graham (who entered the race late and has since dropped out) and Al Sharpton, who gets his own chapter in Shapiro's examination of "vanity candidates" - candidates like Sharpton, Moseley-Braun and Kucinich who enter the race with apparently little hope for winning. Absent from the book is Wesley Clark, who did not enter the race until the book was nearly published. Shapiro's book is based less on policy positions and public facades (although each get their due in the book) than on the candidates as people, and on the whole, each comes off well. Shapiro's biases in the book are reasonably up-front: he identifies himself as a Democrat and he states his personal position as being closest to Howard Dean, and for the purposes of this book it works well. Clearly stating his own stance allows him to deal relatively even-handedly with each of the candidates in turn, although its hard to shake the feeling that maybe he's a little harder on Howard Dean as a result initial Dean-leanings.On the whole, it's not a deep, life-changing read, nor will it necessarily cause you to rethink your views on the 2004 Democratic candidates, but it is definitely worth reading. Shapiro is careful in the time he gives each candidate, and at the end of the book you come away feeling like you know the candidates more intimately than you could ever from watching ad spots and debates. It's a worthy goal for any political book, and Shapiro writes it well enough to keep you engaged through all 215 rather-quick pages. If the 2004 Democratic hopefuls or the American political process interest you at all, I recommend giving it a shot.

The Democrats, Live and Unplugged

Published by Thriftbooks.com User , 18 years ago
Walter Shapiro tells us in this book that when his mother placed her copy of Theodore White's "The Making of the President 1960" in his hands, it was a life-changing event. Now, more than four decades later, Shapiro has become White's spiritual heir with this book. White's great innovation was to be the first one on the ground, on the road and in the air with the men who were in pursuit of the presidency. Naturally, he spawned generations of imitators, who had the ability to jump on the campaign bus early but lacked White's gifts for insight and analysis. In "One Car Caravan," we find Shapiro on the campaign trail with the leading Democratic contenders from mid-2002 to mid-2003, a time when they were only attracting sporadic coverage in the national media, and more importantly, a time when the handlers and professionals had not completely gained the upper hands in their campaigns. As a result, we see John Kerry, Joseph Lieberman, Howard Dean, Dick Gephart and John Edwards in their homes, in their offices, in the living rooms of New Hampshire Democrats, appearing as supplicants before possible donors--in short, at a time when their candidacies still have some spontaneity left in them. We gain the benefit of Shapiro's insights honed through many decades of political reporting, and it's leavened by flashes of his gift for humor as well. (Once Al Gore removed himself from the race, clearing the way for the proudly Jewish Lieberman's candidacy, Shapiro observed that "The yarmulke was in the ring.") Supporters of Carol Mosley Braun, Al Sharpton and Dennis Kucinich probably won't find much to like about this book, as Shapiro dismisses them as vanity-driven candidates "...who clutter up a presidential race that they have no chance of winning." But after 40 years on the trail, Shapiro is calling them like he sees them. He offers what he admits is a very personal view of these potential presidents. But it seems to be based on an honest evaluation, based on his own values--most important among them, a belief in the value of this process, as strange, expensive, lengthy and cluttered as it might seem at times.

This book is witty, informative and terrific

Published by Thriftbooks.com User , 18 years ago
What wonderful insight into the Presidential candidates. Walter Shapiro has given me such a clear understanding of the candidates, their thoughts, their quirks and their essence. A must read for any thoughtful person.
Copyright © 2022 Thriftbooks.com Terms of Use | Privacy Policy | Do Not Sell My Personal Information | Accessibility Statement
ThriftBooks® and the ThriftBooks® logo are registered trademarks of Thrift Books Global, LLC