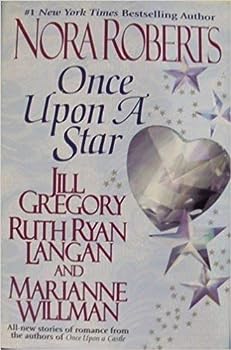 Once Upon A Star: Ever After / Catch a Falling Star / The Curse of Castle Clough / Starry, Starry Night

#1 New York Times bestselling author Nora Roberts presents four illuminating stories of romance, passion, and magic... In Nora Roberts's "Ever After," an ancient star pendant sends an enchanting woman... This description may be from another edition of this product.

Published by Thriftbooks.com User , 16 years ago
I am a huge Nora Roberts Fan! Plus I love the fantasy -romance novels. This book, by 4 fantastic authors, offers 4 great love stories each with an extra twist. I liked the idea of four shorter stories because then I was able to get in my reading "fix" during my limited free time.

Published by Thriftbooks.com User , 17 years ago
I had already read the Nora Roberts Spellbound in another book, but the additional stories were absolutely wonderful. I am glad I bought the book. Now I want all of the Once Upon books!

Published by Thriftbooks.com User , 20 years ago
"Once Upon a Star" is a delightful anthology filled with four fantastic tales of magic and true love. Every story is well-written and utterly enthralling, making it nearly impossible for me to pick a favourite. Each of these four talented authors shines in the original and intriguing stories they have created."Ever After" by Nora Roberts tells the story of Allena Kennedy, who just can't find her place in the world. While in Ireland helping her stepsister Margaret run her tour company, Allena buys a beautiful star pendant. The next thing Allena knows, she has missed the ferry she was supposed to be taking, but then finds a boy with a boat to take her where she needs to go. But Allena ends up on Dolman Island, miles from where she should be, in the midst of a wild storm. Reclusive Conal O'Neil finds Allena out in the storm and reluctantly brings her back to his home. Though at first he is rude and standoffish, Conal can't resist Allena's charms, as she makes his house feel like a home for the first time in years. But Conal knows from the star pendant around Allena's neck that she is the woman the fates have chosen for him. Determined to make his own destiny, and not allow his life to be dictated by fate, Conal tries to push Allena away, and may just be throwing away his one chance at happiness and true love! Being a Nora Roberts story, "Ever After" is undeniably a fabulous read."Catch A Falling Star" by Jill Gregory is a wonderful historical romance with just a dash of magic thrown in. Princess Lianna of Penmarren has promised to marry Ambrose the Barbarian to keep peace in her father's land. But Lianna is terrified by the prospect, as Ambrose is a ruthless warrior who supposedly murdered his first wife. The day before the wedding is planned, Ambrose arrives in the middle of the night demanding Lianna marry him at once and return to his home at Crow's Keep. Ambrose's homeland of Blackenstar is once again under attack, and he must go at once to defend it. So Lianna marries Ambrose, counting on her father's promise that a great army will come to rescue her soon.But as Lianna gets to know Ambrose, she finds he is not the heartless monster she has heard about. Lianna discovers the real Ambrose, a fair and compassionate man who his people regard with affection and respect, forced to defend his lands against a never-ending onslaught of invaders. Lianna finds incredible passion and tenderness in Ambrose's arms, and falls deeply in love with him. But soon the day Lianna has dreaded comes, when she learns the attack on Crow's Keep is imminent. Will Lianna find a way to save Ambrose's home? And will Ambrose believe that Lianna truly loves him, or will he be too shattered by her apparent betrayal to see the love she feels in her heart? This was an excellent tale, that had me really caring about Ambrose and Lianna, and praying for a happy ending."The Curse of Castle Clough" by Ruth Ryan Langan tells the story of Lord Robert Cameron. Rob's

These short stories are delightful!

Published by Thriftbooks.com User , 22 years ago
I really enjoyed these short reads. They are just the perfect length. I loved the originality of them and encourage everyone to read them. I read a story each night and found myself dreaming of the wonderful plots and characters in the book.

Once Upon a Star is the perfect holiday read!

Published by Thriftbooks.com User , 23 years ago
Once Upon a Star anthology was the perfect read to squeeze in between our holiday activities. From fairy love legends to haunted castles, Nora Roberts, Jill Gregory, Ruth Ryan Langan and Marianne Willman paint four beautiful novellas that showcase the magic of love.
Trustpilot
Copyright © 2022 Thriftbooks.com Terms of Use | Privacy Policy | Do Not Sell My Personal Information | Cookie Preferences | Accessibility Statement
ThriftBooks® and the ThriftBooks® logo are registered trademarks of Thrift Books Global, LLC