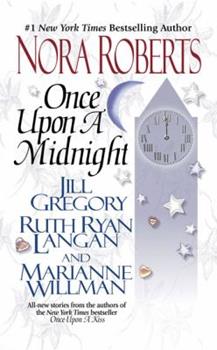 Once Upon a Midnight

#1 New York Times bestselling author Nora Roberts presents four romantic stories of magic at midnight... In Nora Roberts' "The Witching Hour," a kingdom is plagued by tragedy until a wizard-god's spell brings forth a courageous and beautiful young woman who must follow her heart in love and follow her destiny in battle. In Jill Gregory's "Mirror, Mirror," a healer sworn to protect the heir to a troubled kingdom must rely on a wounded knight and a...

Published by Thriftbooks.com User , 14 years ago
Every now and then I like to pick up a fantasy book and this time around I read this one. It wasn't horrible by any means but it wasn't the greatest either. It kept me entertained for the most part and that's what counts. As with other books with short stories written by different authors some of the stories are better than others, but all in all it wasn't to bad.

Published by Thriftbooks.com User , 16 years ago
-The Witching Hour by Nora Roberts: A kingdom is plagued by tragedy until a wizard-god's spell brings forth a courageous and beautiful young woman who must follow her heart in love and follow her destiny in battle.- Mirror, Mirror by Jill Gregory: A healer sworn to protect their heir to a troubled kingdom must rely on a wounded knight and magic mirror for assistance...-Dream Lover by Ruth Ryan Langan: On a business trip to Scotland, a young American disillusioned by love gets swept up by the romance of the Highlands, and by the charms of a perfect stranger...-The Midnight Country by Marianne Willman: An American researching her family history in Europe stumbles upon an enchanting chateau and its enigmatic master, who is convinced she is the key to a terrible curse....

Published by Thriftbooks.com User , 17 years ago
I had already read the Nora Roberts Spellbound in another book, but the additional stories were absolutely wonderful. I am glad I bought the book. Now I want all of the Once Upon books!

Published by Thriftbooks.com User , 19 years ago
I divide this four story series into two parts. The good part...and the bad.Nora Robert's The Witching Hour was enchanting...very well developed. The evil Lorcan has killed Aurora's parents and proclaimed himself king of Twylia. Now...as Aurora's birth and identity is revealed to her, she must follow destiny in order to reclaim her kingdom and heritage...and find her love, the seemingly cowardly Thane, who she spent time with in dreams since they were children. Thane also has this power to dream and they were in love long before they actually met. Now...they must see past the misconceptions each has of the other to rediscover each other. Very charming!Jill Gregory's Mirror, Mirror is also very interesting to read. Fiona, a healer, was sworn to protect the heir to the kingdom of Grithain, who is currently a child and in hiding from those who wish to have the land to themselves once old King Mortimer dies. With a magic mirror that sees into the past, present, and future, she is able to save a brave warrior, who isn't who he seems to be. Once Fiona finds out that Conor is the illegitimate son, who is rumored as wanting to kill the heir, she regrets saving him, until he convinces her that he wants to protect the heir...and they fall in love (unwillingly on Conor's part)...He has to conquer his wrong notion of love. Great story.This is the bad part:Dream Lover started out as a very interesting story. Allison is betrayed by love and Heath has no love. They meet on the plane to Scotland and the chemistry begins. Ally nurses the injured Heath and it turns that they are both going to similar places so Heath offers to drive her there. "Unfortunately", the car leaves Heath behind while he goes with Ally to discuss business with the owner. However, there are many missing pieces...the author does not explain the concept of midnight, since that is the topic of the book. Also, Ally and Heath's love is developed within a day, with the help of a certain kindred spirit. Finally the story ends abruptly, leaving the reader to wonder when the author would explain all the little quirks throughout the story.The Midnight Country also started out to be very compelling and I had thought that I would enjoy this story the most. Beaumont Foret was a fairytale told to children. A castle surrounded by wolves, but Jenna is determined to prove them wrong...her ancestors were all born in Beaumont Foret. She finds the mystical village, and finds out a genetic secret that Philippe, the owner, has been keeping from her. Philippe also finds out Jenna's genetic secret. I didn't enjoy this story because though I thought that they would find a cure to their genetic flaw and become humans permanently, they decide to forgo that and even make love while they are not humans...a bit disturbing. But after a while, I can accept it a bit more. Still was a bit disappointed.Overall, nice read because of the first two stories.

Published by Thriftbooks.com User , 19 years ago
"The Witching Hour" by Nora Roberts. Cneturies of war has devastated the island Kingdom of Twylia. The hope of the people lies in Draco's prophecy that an intrepid queen will lead her forces to victory over evil. As Aurora falls in love with Thane, she risks her life not knowing if she is destiny darling facing the malevolent Loreen."Mirror, Mirror" by Jill Gregory. As King Mortimer of Grithain lies dying he obtains a vow from Ariel to protect Prince Brandon from their enemies. With the help of a magic mirror, Ariel's sister Fiona the Healer, Conor the wounded knight, and an incredible amount of luck and love they might succeed."Dream Lover" by Ruth Ryan Langon. Antiques expert Allison flies to Scotland to complete the purchase of Hamilton Hall from owner Malcolm. Allison will strip the house of anything of value so her firm can sell them. On the plane Allison meets the badly injured Heath. However the matchmaking of the mysterious Sir Malcolm combined with the magic of love propels Allison to need to save Hamilton Hall."Once Upon a Midnight" by Marianne Willman. Californian Jenna searches for her roots but cannot find her final destination. The locals insist that Beaumont Foret is a fairy tale. When Philippe senses her nearby he runs out to protect her from the wolves. As they fall in love, each keeps a genetic secret from the other that if revealed will lead to happiness for both of them.The four magical romances are all delightful novellas that add to the enchanting mythos of the "Once Upon A" series.Harriet Klausner
Trustpilot
Copyright © 2022 Thriftbooks.com Terms of Use | Privacy Policy | Do Not Sell My Personal Information | Cookie Preferences | Accessibility Statement
ThriftBooks® and the ThriftBooks® logo are registered trademarks of Thrift Books Global, LLC