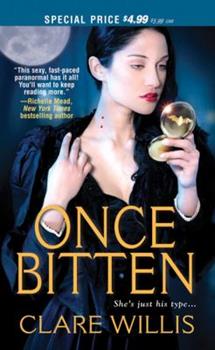 Is it more than just a one-bite stand? Angie McCaffrey has endured her share of liquid lunches and boardroom shmoozefests to win new advertising clients. But her latest account--a cosmetics line for wannabe vampires--involves some unusual customer research at San Francisco's hippest private nightclub. The "undead" patrons are about as genuine as Macabre Factor's press-on fangs, but one thing is very real--the skin-tingling connection Angie feels with...

Published by Thriftbooks.com User , 12 years ago
For those looking for something truly original in vampire stories one should try this story. Didn't have my usual ending that I like in vampire books but that might change if the writer continues the series like she would like to do. The story deals with a woman name Angie who doing unusual customer research for the mysterious client Eric Taylor and his press on fangs clients of a goth vampire club When her boss Lucy goes from merely missing to dead the book switches from your vampire love story to that of a true mystery novel. The read is bombarted with a series of suspects that leave one trying to race against time with the writer on who solves the murder first.

Published by Thriftbooks.com User , 12 years ago
As a novice to vampire theme books, I opened the cover of "Once Bitten" with trepidation. I rapidly discovered, however, that yes there is a possible vampire, but that yes there is more. This is a fast paced romantic mystery as well, featuring Angie McCaffrey, an inquisitive, down to earth heroine, Eric, her hot love interest, and Steve, her appealing shoulder to lean on friend. Then there are the mysteries surrounding the various dead and bloodless bodies of people Angie knows, the questionable actions of big business and ad agencies, the shocking acts in underground private nightclubs, and the equally shocking underground trafficking of women into the sex trade. What the heck is happening? I found myself racing to finish the story, to discover who the perpetrator was and the reasons for these odd deaths. Is it all Eric's fault? As a San Francisco fan, I also enjoyed the fact that Clare Willis lets her home town, her "Beloved San Francisco," shine. The reader views the city through the plot's "tour" of the place, and at Clare's website in the "City Scenes" section, one can learn more by following Angie's route from Downtown to Fisherman's Wharf and beyond.

Published by Thriftbooks.com User , 12 years ago
In San Francisco advertising executive Angie McCaffrey works the Macabre Factor account when her boss Lucy Weston vanishes. Macabre Factor is a start up cosmetics firm offering fangs to press onto teeth that allegedly make mortals look like vampires. When Lucy is found dead, the cops believe someone from one of the vampire clubs that frequent the city killed her. At one of the vampire clubs that Angie has begun to visit to get a better handle on the customers' needs for the client, she meets Eric Taylor. They are attracted to one another, but she heard he was seeing Lucy just before she disappeared. As Angie falls in love she begins to believe her soul mate has no soul and is a for real blood sucker who if true may make her his next victim. Once Bitten is a fine urban romantic fantasy in which the strong mysteries of Lucy's disappearance and what species Eric is propel the fun plot more so than the anemic romance. Angie is a strong lead protagonist who holds the subplots together as she walks the streets of San Francisco she must choose whether she can trust her life and soul to Eric or is he the one who will destroy both? Harriet Klausner

Published by Thriftbooks.com User , 12 years ago
Once Bitten by Clare Willis Paranormal Romance- Dec. 1st, 2009 5 stars Fantastic Refreshing New Vampire Romance Mystery!!! This book was fabulous from start to end. I truly was hooked from the first couple of pages. I often tend to skim a few of the vampire books just because they often become to cliché as the story progresses. However, Once Bitten takes on an entirely different approach to the world of vampires. The story introduces the reader to an assortment of characters who are classified as wannabe vampires or the actual real thing. But the fun part is guessing who is what and how does any of this relate to the matter at hand. The writer does an excellent job in creating a mystery full of twists and excitement. The romance element added the extra topping to a wonderful fun read!!! The characters were a pure delight. I loved Steve's character, he really added a great sense of humor to the storyline. Nicolai's character was also fascinating, he gave the really interesting historical and knowledge element to the novel. I actually work in San Francisco near the Bay Bridge. I really thought the writer did a fantastic job with the scenery layout and description, it was very accurate. I can only hope this is only the beginning of a new series. I would love to read more about Angie and Eric in future upcoming books. There is a lot that could be discussed and elaborated into further details for a potential series. Do not miss this book! Reviewed by Monica from the Bookaholics Romance Book Club
Trustpilot
Copyright © 2022 Thriftbooks.com Terms of Use | Privacy Policy | Do Not Sell My Personal Information | Accessibility Statement
ThriftBooks® and the ThriftBooks® logo are registered trademarks of Thrift Books Global, LLC