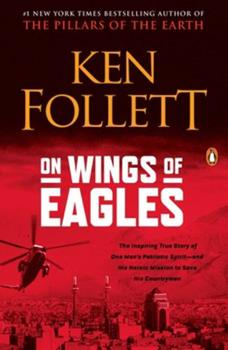 On Wings of Eagles

#1 bestselling author Ken Follett tells the inspiring true story of the Middle East hostage crisis that began in 1978, and of the unconventional means one American used to save his countrymen. . . . When two of his employees were held hostage in a heavily guarded prison fortress in Iran, one man took matters into his own hands: businessman H. Ross Perot. His team consisted of a group of volunteers from the executive ranks of his corporation, handpicked...

This is one of the best books I've ever read in my life. If you want to read about true American He

Published by I Feel safe flying now! , 1 year ago
This book is a story about real American men. I think it's the epitome of what American men are like. American men are the bravest men in the world and the most true. We've been so blessed to live in a country that has men like this it's what holds our whole country together. Any man that holds this family together and works to take care of them is an American Hero.

GREAT story, and it's true!

Published by Thriftbooks.com User , 14 years ago
Ken Follett captures in his unique, exciting style the true life story of Ross Perot's refusal to let the Iranian government hold two of his employees in captivity when they had done nothing wrong. The book follows the actual events through the capture of the the two employees, the ineffectual US government attempts to release them through diplomatic channels, and the assembly and training of the recovery team. Follett does an excellent job of profiling the team, detailing their military and professional backgrounds, as well as their personal situations and motivations for volunteering for the rescue mission. The author also gives an excellent profile of Ross Perot, the friendly, seemingly soft-spoken millionaire with a will of steel. This book is easy to read, with plenty of adventure and the occassional humorous story to keep it personal and human. An absolutely outstanding story, it not only tells a true story but teaches important lessons about leadership and loyalty.

True story - as good as any politico/action novel

Published by Thriftbooks.com User , 20 years ago
Most people know Ross Perot as the little guy with big ears who wanted to be President. A Texan of short stature with alot of money. He's all that - and a hell of alot more. Any person who takes the time to read this book will learn what a great and honorable person he is. His loyalty to his EDS employees goes far beyond what any person could have possibly expected. When members of his corporate entity (EDS) are arrested in Iran at the beginning of the Iranian revolution, his first reaction is to ensure that their families in the States are taken care of. His second step is to bring all the pressure he can muster to the State Department to free his men. When he meets roadblocks there -- he hires the best Special Ops guy around and puts together a small group of his employees. Together, along with a wad of cash for bribes, they go into Iran where they break their men out of jail and eventually are able to sneak out of the country. Here is a man who put himself and his money on the line in order to protect his employees. The mechanics of the how are left to the reader. After reading this book, I am quite sure you will have found new respect for the little man from Texas.

Published by Thriftbooks.com User , 20 years ago
This is a very well written book. It is an excellent writeup of Ross Perot's daring rescue of his employees from Iran when they were arrested by the Iranians during the revolution. There were some interesting characters in this book. One of the more noteable characters was Bull Simon. This book describes the rescue from start to finish. You will admire the cunning and bravado of the hostages as well as their rescuers. You will also come to admire the raw nerve of H. Ross Perot. You have to remember that this was Iran at it's most dangerous time. You will also become a fan of Ken Follett. Read this book. You will not be dissapointed.

One of my Top 3 Favorite Books of all Time!

Published by Thriftbooks.com User , 21 years ago
On The Wings of Eagles is destined to be a classic. It is the true life story of Ross Perot trying to save members of his corporation who are being held hostage by the Iranian government. He first tries using his clout and influence in Washington but when that does not work he hires a team of mercenaries to go to Iran to free the hostages and return unharmed to the United States.The book reads like a fictional spy novel; however, it is a true story. Not "based on a true story" but 100% nonfiction, according to author Ken Follett. Nevertheless, this is one book that you will just not want to put down.The maps, pictures, and cast of characters list makes the book even easier to follow.Furthermore, the book also gives insight into the real life character, ex-presidental candidate, Ross Perot.

Ken Follett made sure that he got it right!!

Published by Thriftbooks.com User , 22 years ago
Once Ken Follett decided to write the book, On Wings of Eagles, he took two years to carefully research every date, place, person and other key fact in the story. This is exactly what you would expect an ex-newspaper man to do, especially one who is writing his first major non-fiction novel and wants to protect his reputation as a successful writer. Ken spent months researching the Iranian Revolution and the EDS rescue mission. He spent weeks individually interviewing everyone who participated in the rescue (except Colonel Bull Simons who unfortunately had died several months after the rescue ended). Follett crossed-checked his facts with the State Department, including staff stationed in the American embassy during the Revolution, with Iranians familiar with the events that had transpired in their country, and with many other people to make sure he got the story right. To the extent that his literary goal was achievable, the book speaks for itself. Anyone who was in Iran during this period of time, and who was familar with the overthrow of the Shah's government, knows how accurate Ken's story is compared to the events that transpired.It was indeed fortunate for the hostages that Ross Perot formed an employee-based rescue team that was successful in their mission. Follett describes this part of the story in great detail. He also relates the other strategies that were employed in an attempt to free the two executives, including the extensive use of lawyers in Iran, the lobbying for assistance at the State Department and the White House, and the exploration of several military-oriented solutions. Follett also documents EDS'attempts to pay the $12,750,000 bail (ransom?)for the two hostages. Unfortunately, none of these solutions worked.If Follett has any problem with his story, it is the vast quantity of source material that he has to manage. Where does he start, where does he stop?? Which people and which incidents are worth including, which are not?? And, does he praise Ross Perot?? Of course he does. Ross is the person who led the rescue, who put his own life and personal reputation on the line. Ross actually went to the Gasr jail to see it for himself, to personally tell the two hostages to keep their faith and to gain first-hand knowledge of the Revolution taking place in Iran. How could Follett tell the story and not praise Perot. Actually, the facts do it for him.In truth, the bottom line measurement of the success of an author's work lies in how many copies of his book are sold. In the case of On Wings of Eagles, the results are staggering. More than twenty years later, the paperback version of the story is still being sold in a dozen languages on bookshevles all over the world. In case, you are wondering how I know all this to be true, I lived the story as one of the hostages who was rescued. I gave the book five stars for accuracy and excitement.
Copyright © 2020 Thriftbooks.com Terms of Use | Privacy Policy | Do Not Sell My Personal Information | Accessibility Statement
ThriftBooks® and the ThriftBooks® logo are registered trademarks of Thrift Books Global, LLC