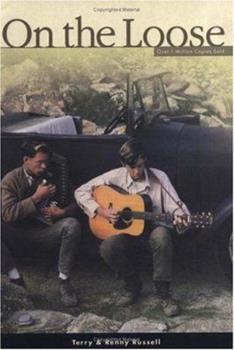 by Terry and Renny Russell

"On The Loose" is a journey through the American West, led by two adventurous brothers, Terry and Renny Russell. As a chronicle of triumph and tragedy, the brothers gain an understanding about themselves through an understanding of the natural world. Includes photos by the authors of Yosemite, Point Reyes, and the High Sierra in the 1950s. 63 photos.

Published by Thriftbooks.com User , 17 years ago
It's quite rare when you can honestly say that a book changed your life but after having read "On The Loose" during my sophmore year at college in 1969, I became an ardent enviromentalist. I also purposed to hike the Appalachian Trail as a result of reading it. Eight years later I fulfilled that promise proudly carrying "On The Loose" in my backpack the entire way. I feel so fortunate to still have my original copy ... it's stained from many days of being with me on various hikes all over the United States but I suspect I'll want to be buried with it! I am so happy to see it re-published. I just hope my grandchildren will someday read it and be moved as I was so many, many years ago. The best books are often the simplest - this is truly a masterpiece. Anyone who cares about the environment or just plain loves going for a hike needs to read it and "feel the eternal connection".

Published by Thriftbooks.com User , 18 years ago
How ironic it is to see that this book is about to be published once again. I was first given a copy in 1969, my freshman year of college, and it was the first publication I'd ever held in my hands that spoke of wilderness as something that could enlarge and enlighten the inner life of a human being. What interested me most was the fact that the Russell boys were the only people I've yet encountered to go into Glen Canyon before it was flooded to document at least some of all that was about to be lost. Given the unsuitability of the geology of the area, and the Native American sites that present day laws would have protected, it's highly instructive to have this book to illustrate what was drowned before most Americans even knew it existed. I'd certainly never heard of Glen Canyon before I picked up "On the Loose." The merits of the Glen Canyon dam were shakey even in the sixties, but the momentum for building big dam projects could not be entirely overcome by the cautionary minority of long-term thinkers. In the end, Glen Canyon was sacrificed partly so that the Grand Canyon might escape the two dams proposed for it. In the decades since, the creation of a 180+ mile reservoir where once a mostly unexplored canyon complex once stood has proven of far less value than it's more famous cousins Hoover and Coulee, and fallen far short of it's promoters' promises. And now patient Nature, always the eventual winner, is taking her canyons back via drought, evaporation, leakage into the porous sandstones, and every dam's nemesis, siltation. Add in the fact that there is a growing movement to take the dam itself down and let the canyonlands heal as best they can, and you've got powerful incentive to revisit the Russells' little book, to see what once was and may once be again. I hope the surviving Russell brothers have had good lives. Their beautiful book certainly struck a chord in me and a lot of people I know.

Published by Thriftbooks.com User , 19 years ago
I have a well-worn copy of the original printing by Sierra Club Books, which inspired my own travels in the American West. To find "On the Loose" back in print, nearly 30 years later, and to give the book as a gift to my son, is to come "full circle."

Published by Thriftbooks.com User , 20 years ago
This book changed my life. I was given a copy while in high school in the mountains of colorado. I was, and continue to be, inpired by this book. My days and nights under the open sky of the west have filled my life with joy - and this book helped get me out there after growing up a city boy in california. Buy it, read it, and give copies to everyone you know.

Outstanding book. Here's how to find a copy.

Published by Thriftbooks.com User , 22 years ago
For all of you who are pining to find a copy, check out bookfinder.com. There are hundreds of copies available (all pre-owned, as far as I can tell) in all varieties of condition and at all kinds of prices. I recently purchased four copies for my husband, for me, and to give as gifts. Good looking!
Trustpilot
Copyright © 2022 Thriftbooks.com Terms of Use | Privacy Policy | Do Not Sell My Personal Information | Accessibility Statement
ThriftBooks® and the ThriftBooks® logo are registered trademarks of Thrift Books Global, LLC