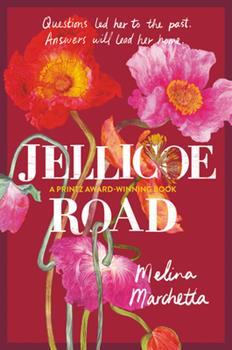 Winner of the Michael L. Printz Award * ALA Best Book for Young Adults * Kirkus Best BookJellicoe Road is a dazzling tale that is part love story, part family drama, and part coming-of-age novel. Described by Kirkus as "a beautifully rendered mystery" and by VOYA as "a great choice for more sophisticated readers and those teens who like multifaceted stories and characters." Abandoned by her mother on Jellicoe Road when she was eleven, Taylor Markham,...

I keep coming back to this book.

Published by Grace , 1 year ago
I read this book over and over in high school. I’m now almost 26, married with kids, and it still pulls me in. I bought it a couple weeks ago because I remember loving it but man. This book makes me feel things so immensely. Everyone needs to read it. It’s not a teen book or a young adult books it’s an everyone book. I hope my husband will read it next. I just love it so much. I wish they would make a show or a movie out of it. I’ll probably read it again in a few weeks. Picking up this book to read was the first book I’ve read for pleasure since high school. I finished in 2 days, and I have kids and am in university full time, but I just couldn’t put it down. I read in between naps and dinner and studying.

Published by Thriftbooks.com User , 13 years ago
I'll admit it, I amost gave up on this novel. I put it off for weeks, after reading only 30 pages. After a few weeks, I promised myself I'd just jump in and finish it, before I moved onto another book. I'm so glad I did continue. I've read so many YA books, and I've never been one for having favorite anythings, but this novel is seriously close to topping the charts of all books I've read. The beginning is slow, it does not make much sense, but as the book continues, the magic happens. I learn more about Taylor Markham's life, and the mysteries wrapped around her and the "wars". I don't want to say much, because I'd hate to ruin the magic of the story. Highlights: Weaving the stories from the past into Hannah's manuscript. I loved learning everything with Taylor. There was always more to keep me curious, keep me turning the pages. I also loved the "wars", because they were just so entertaining at times. Jonah's backstory was a blow to me, also. I wasn't expecting what he says to Taylor about the day at the train station, and it was an interesting shock. Lowlights: It was incredibly hard to get into at first, but as I got to chapter 3, or 4, I was was hooked. I didn't want it to end.

Published by Thriftbooks.com User , 13 years ago
I loved this book. The dialogue is witty and engaging. The plot is compelling. But the character development is where the story is. It is a coming-of-age story as well as a love story. Very enjoyable.

Published by Thriftbooks.com User , 13 years ago
Machetta, M. (2008). Jellicoe Road. New York: Harper Teen. 9780061431838 Finally got around to reading this year's Printz winner! Originally published in 2006, in Machetta's homeland, Australia, this story, set in the Australian bush, crosses time to share the events on Jellicoe Road and their repercussions for students at the Jellicoe School, the cadets who camp near by for six weeks and the townies. The majority of the narrative follows Taylor, a seventeen-year-old girl who has just been chosen to lead her school's underground community in a battle over territory lines with the cadets and the townies. Abandoned by her mother on Jellicoe Road when Taylor was twelve, Hannah, the woman who has been her guardian since then, has left. Adding to her turmoil, a boy, Jonah Griggs, who Taylor ran away with in a quest to find her mother several years ago and who betrayed their location to the school and Brigadier is back as the leader of the cadets. The narratives of the past, arguably sections of a book one of the characters is working on, provide insights into Taylor's situation and her relationship with some of the adults in the area. A complicated text full of contrasts and parallels, Jellicoe Road seems very confusing for the first 20 or 30 pages. After that, interest in the story and Taylor's wit, toughness and struggles as a leader captured my interest. But then around page 80 or 90, I began to see how the different narratives from the past and present began to weave together and I began to make connections. That's when I became totally engrossed and didn't want to put the book down. So, readers be warned, get through the confusing beginning and it will be worth it. Now, I don't want to rush things. I'll have to read Saving Francesca and Looking for Alibrandi, but I think I may have to add Melina Marchetta to the list of authors I'd like to marry. Activities: This is a good sample text to share with students to show examples of parallels, contrasts and foils. Doing some research on Australia would probably help to flesh out some of the details of the text: their education system, the appearance of the bush, the uniforms cadets wear, etc. A teacher could also use this book to trigger a refresher on metric measurements. Jellicoe Road could also be used to encourage students to make and organize notes on the characters to help students to make connections. Quotes of Note: "My father took one hundred and thirty-two minutes to die. I counted. It happened on the Jellicoe Road. The prettiest road I'd ever seen, where trees made breezy canopies like a tunnel to Shangri-la" (p. 1). "Someone asked us later, "Didn't you wonder why no one came across you sooner?" Did I wonder? When you see your parents zipped up in black body bags on the Jellicoe Road like they're some kind of garbage, don't you know? Wonder dies" (p. 2). "I don't know where I fit in. One day when I was eleven, my mother drove me out here and while I was in

Published by Thriftbooks.com User , 13 years ago
I can honestly say, this is one of the best books i've ever read. It's my favourite, along with Saving Francesca. My sister got our first edition from her friend in Australia. While she was reading it I was not interested in it until she forced me to read it. I couldn't put it down. Taylor Markham is an abandoned child in Jellicoe School. She lives in a boarding school. Her care taker is a girl called Hannah, whom Taylor is very close to. Taylor strives to find the truth about who she is. Along with her friends Ben Cassidy, Raffaela, and Santangelo she finds that friendship is the closest thing she can have to a family. Along the way she falls in love with the enemy, unearth secrets about her past, and is the leader in a war she does not want to happen. This book made me laugh, and from a specific point onwards I cry non-stop, despite having read it over ten times. Easy read and catchy plot, Melina Marchetta does not fail you!

Published by Thriftbooks.com User , 14 years ago
Taylor Markam was abandoned by her mother at a 7-Eleven on Jellicoe Road when she was a mere eleven years old. Only moments later a woman by the name of Hannah picked her up and brought her to the Jellicoe School. Now she is seventeen and finds that Hannah is a rock in her inconsistent life. While she has Hannah, Taylor doesn't know much about her family except the horror stories she remembers of her mother. She does find comfort, though, in a manuscript that Hannah has written about a group of five friends who met in the worst circumstances, but developed a remarkable friendship when they only had each other. When Hannah just up and leaves, Taylor doesn't understand what has happened and she becomes a wreck. Not only does she have to deal with Hannah's disappearance, but she has just been named the head of her House and the leader of the school kids in the annual territory wars against the "Townies" and "Cadets." In the war, the three groups battle and negotiate, following an extensive set of rules that might as well be history. As the war wages on, Taylor learns to take an active role in her community, as well as develop relationships that she never thought possible. Especially with Jonah Griggs, the leader of the Cadets, whom she already has quite a history with. This war will be like no other. It will not only be between the normal three parties, but among friends, hearts desires, and, most of all, Taylor herself. From the title I was expecting a light and fun read. Wow, was I wrong! This book is filled with heartbreak, joy, laughter, and sorrow. It completely blew me away and surpassed every expectation I had, even though I was expecting something completely different. Before I even get into the elements of the story I have to comment on how much talent the author has. Melina Marhetta's writing style is indescribable. It seemed that she was so comfortable writing the story and her words just flowed from page to page with great clarity. I loved how the author weaved many intricate details and mini-stories into one big story, making it like a puzzle that slowly comes together until those last couple of pieces just fall into place. The only miff I had with this book is that it took me probably until the third chapter to actually understand what was going on. In the beginning, there were two stories and it was hard to wrap my head around everything that was happening. After that, though, it seemed the author settled into writing and the story took off. Taylor, without a doubt, is one of the best characters that I think has ever been created. She has this true voice where you can hear and feel her emotions ring out. By the time the book had ended I felt like I knew Taylor like I know my best friends. While Taylor was the main character, the author did a fabulous job creating the other characters, too. Unlike many supporting characters in books, the characters in JELLICOE ROAD all had their own voices and became their own people, with real
Trustpilot
Copyright © 2022 Thriftbooks.com Terms of Use | Privacy Policy | Do Not Sell or Share My Personal Information | Accessibility Statement
ThriftBooks® and the ThriftBooks® logo are registered trademarks of Thrift Books Global, LLC