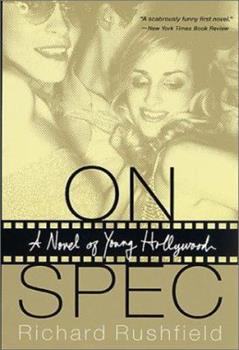 On Spec: A Novel of Young Hollywood

A brilliant, dead-on debut about what it takes to make it in today's Hollywood. "On Spec" follows the paths of six Hollywood hopefuls--a screenwriter, an agent, a development girl, an actress, a studio chef, and an aspiring producer--as they experience the pitfalls and payouts of life on the hollwood fast track. More than just a novel about the entertainment industry, "On Spec "is a parody of modern life, where winner takes all and the losers are...

Published by Thriftbooks.com User , 18 years ago
Read this book in tandem with Joe Eszterhas' Hollywod Animal, and you'll see that Rushfield is write-on. Toss in Hollywood Interrupted and you have the Unholy Trinity of Truth about this city--even though one --Rushfield's -- purports to be fiction. well maybe in parts, but like Dominick Dunne, this guy knows how to hide the truth in fictional frosting so he won't get his ass kicked, or worse yet have to start asking if you'd like that double latte decafe'd...His stuff in Vanity Fair is funny too...

Published by Thriftbooks.com User , 21 years ago
One problem with all these satires on the Hollywood scene is that the world described is so unfamiliar that we don't know what is being satirized and when the description is realistic. It's like Stella Fitzgibbon's "Cold Comfort Farm" or Lewis Caroll's verse parodies where we find the pastiche funny but don't know the originals. It's the story of the making of a movie flop told in the first person by the various characters (agent, actress, producer, writer, d-girl) involved. It is written in Californian with many obscure dialect words. Part of the merriment of the jest lies in the author's use of this patois. It includes an admixture of Spanglish and dropping the first syllables of words. I often suspected he introduced his own neologisms for comic effect. Above all it's very entertaining and very very funny.

Published by Thriftbooks.com User , 22 years ago
Extremely well-written, engaging and inescapably funny, the final resolution ties together a plot that is fufilling and rewarding. Even for someone who lives in the Beltway and could care less for the intricate details of mass-produced culture, this book was a great introduction to just how non-meritorious the entertainment biz seems to be.

Published by Thriftbooks.com User , 22 years ago
Strongly recommended. "On Spec" is the real deal--an extremely funny and deft rendering of Hollywood ambition and absurdity. A modern-day "What Makes Sammy Run?"--but even sharper, more fun, funnier. Each voice--starlet, screenwriter, agent, producer--is dead-on, scathing. A must-read primer for anyone who has ever thought they'd like to make it in show-biz...it'll make you sweat with recognition. I'm ready for the next one--write on, Richard Rushfield. Simply a great read. Enjoy!

No truer portrait of Hollywood has ever been painted

Published by Thriftbooks.com User , 22 years ago
On Spec is absolute perfection from cover to cover. Rushfield's spot-on depiction of all aspects of the Hollywood machine is not only poignant, but hilarious and innovative to boot. It is the "What Makes Sammy Run" of our era. In fact, it's better. I cannot praise this book enough. Its importance and impact will most likely be felt for years to come.
Trustpilot
Copyright © 2022 Thriftbooks.com Terms of Use | Privacy Policy | Do Not Sell My Personal Information | Cookie Preferences | Accessibility Statement
ThriftBooks® and the ThriftBooks® logo are registered trademarks of Thrift Books Global, LLC