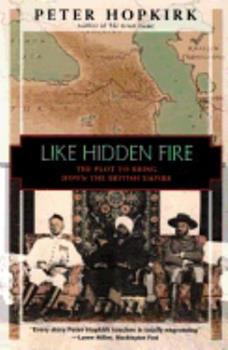 Like Hidden Fire: The Plot to Bring Down the British Empire

A GRIPPING STORY OF IMPERIAL AMBITION, SWASHBUCKLING ADVENTURE, AND THE KAISER'S OWN JIHAD. An acclaimed historian tells, for the first time, the full story of the conspiracy between the Germans and the Turks to unleash a Muslim holy war against the British in India and the Russians in the Caucasus. Drawing on recently opened intelligence files and rare personal accounts, Peter Hopkirk skillfully reconstructs the Kaiser's bold plan and describes the...

The fire that nearly engulfed the world

Published by Thriftbooks.com User , 15 years ago
Hopkirk delivers a wonderful book in his look at how the British Empire was forced to respond to Germany's attempts to destroy its empire. The book is the most terrifying installment of the series as Hopkirk describes Germany's efforts to raise a holy war in the Middle East. The efforts of the British to stop it are impressive and once again show the triumph and finesse of the British imperial system. This is another fascinating book that looks at how the British empire lasted throughout the turbulent years of world war 1. As always the book is very well written and impressively displayed.

Why they call it World War

Published by Thriftbooks.com User , 17 years ago
So many aspects of our present world and the dilemmas that plague us now grew out of the backrooms, the backwoods and the backwaters of the world. Even today, Central Asia is a mystery to most people in the US. "Like Hidden Fire" is a great place to start to learn how complex the world is and why the peoples of the Middle East and Central Asia might have just a little mistrust of the West and its motives. The story is the down and dirty of the German efforts to unseat the British Empire leading up to and during the First World War. It includes efforts to create a Holy War against the British and champion the Kaiser as a "Defender of the Faith" (the Faith in question being Islam, of course). The trail takes us from intrigue to counter intrigue through Turkey, Iran and into Central Asia where then, as today, the Westerners are more pawns in the local struggles than vice versa. This is totally relevent to today both in understanding the local issues as well as how shallow the West is in dealing with the people and culture of the Middle East and Central Asia. The work is as vast and complex as the region and the people it covers. Set some time aside to read it and don't be surprised if you find yourself exploring the people, places and other works that are cited in the book. -Mike

Great Game Intrigue in the Middle East during WWI

Published by Thriftbooks.com User , 17 years ago
For those of you who are familiar with Hopkirk's other books, this book is yet another well written narrative on an obscure subject. Hopkirk does a wonderful job of bringing to life key personnel who were involved in Great Game intrigue in the Middle East during WWI. Figures such as Von Hentig, Niedermeyer, Wassmuss, Teague-Jones, Noel, and MacDonnel to name a few, are brought to life and given their rightful spot in the plot-counterplot dramas that unfolded behind the scenes in Mesopotomia, Persia, Afghanistan and Russian/Soviet Central Asia. I would have liked to see a bit more development on Wassmuss vis-a-vis Mesopotamia, and I think any reader of this would love to see in the future the true life story of Reginald Teague-Jones. However, the scope of this book is so large, that any further elaboration on any of these subjects would have made the book a multi-volume set. A great read for anyone who is interested in any of the other theaters of WWI. Excellent bibliography (as usual for Hopkirk)...highly recommended.

Published by Thriftbooks.com User , 19 years ago
If you are a Hopkirk addict like me, you will breeze through another one of his exciting narratives of Central Asian History and love every minute of it. Fire up the kettle, throw on your fez and curl up in your favourite reading chair as Hopkirk takes you on a true-life tale of derring do against German and Communist Agents in central Asia in World War I. Russia is the ally and the German is the new encroacher on British Empire and the Imperial Indian Raj. Hopkirk of course picks his cast with a loving hand and we have the usual sort of British imperial heroes, speaking the local language, gaining favour from locals with their fair and firm hand, and doling out the intrigue in dollops. But... Hopkirk give us detial of the German Spies in this area as well. Some like Niedermeyer, the German Lawrence and his associate Hentig on their overland journey to Kabul to try to convince the Emir to throw in his lot with the Turkish and Germans and attack British India. The details of his adventures in the Persian deserts and his sojourn in Kabul make great, fast reading. The heebie-jeebies that his action caused the British and their reaction to it are also adventure writ large. Hopkirk describes the German/ Turkish attempt to bring down the British Empire with a holy war orchestrated by themselves. It also shows what brittle fibre holy war is made from. In the end the respective ethnic groups in the muslim world acted in their own self interests -- the Persians had no love for a Turkish Empire, the Emir of Afghanistan kept checking which way the wind blew before deciding to remain loyal to Britain. And the Arabs decided that an Englishman (TE Lawrence) held the Key to independence, not their fellow muslims in Constantinople. Once the mess of the Arab Revolt gutted Turkish Power the British find themselves out of the frying pan and into the fire and intervene in the Caucasus' to try to keep Russia in the war. The British effort here and the emmiment Victorian personalities are well described and the perfidious Red Reaction and myth-making also exploded by Hopkirk. In final analysis Hopkirk writes books alive with adventure. I think that Hopkirk had a major problem in delimiting the book. That is a hard thing to do in a work of this kind. Some things such as the British under seige at Al Kut and its eventual fall are directly related to the tales of our heroes on the ground the political outcome later described. Some other details might have made a shorter book (ie, the Zimmerman Telegram recounting) but they are still interesting and indirectly related to the tale Hopkirk is telling. If you have the ability to honestly judge it then there are a few flaws that should be noted, but they do not at all detract from the flow of the read or the historical smorgasbord laid out before you. In final analysis this book encorporates the widest canvas that Hopkirk has used to date, the World War. That necessitates more detail on distant, but related elements. These ma

Published by Thriftbooks.com User , 20 years ago
When it comes to history, many of the most engrossing books are what the French call "haute vulgarisation"-popularizing studies with an emphasis on a tale well-told. Like Hidden Fire is this; but it is more too, rescuing from obscurity a forgotten yet critical series of events during World War I. Hopkirk recounts how the Germans and Ottomans worked together from 1914 on to dislodge the British and Russians from the Caucasus, Iran, and Central Asia. For the Germans, this was the route to India; for the Turks, it offered a Pan-Turkic realm. Even readers versed in twentieth-century history will probably shake their head in amazement at their own ignorance of the German role in this jihad, a story full of drama and memorable figures. Highlights include the career of Wilhelm Wassmuss, "the German Lawrence," singlehandedly causing havoc for the British in southern Iran; the Niedermeyer-Hentig expedition to Afghanistan which came close to lighting the fuse of revolution in India; the near-success of Prince Henry of Reuss, Germany's minister to the shah's court, in bringing Iran into the war on the Entente side; and how the loss of a German codebook in the Persian desert contributed to the United States entry into the war. In addition, Hopkirk also tells the remarkable tale of British diplomats, spies, and soldiers in the anti-Soviet rebellion in Baku. The Great War so profoundly changed the Middle East that its consequences continue to be felt; therefore, the events described in Like Hidden Fire need urgently to be incorporated into the standard history. Middle East Quarterly, March 1995
Trustpilot
Copyright © 2022 Thriftbooks.com Terms of Use | Privacy Policy | Do Not Sell My Personal Information | Accessibility Statement
ThriftBooks® and the ThriftBooks® logo are registered trademarks of Thrift Books Global, LLC