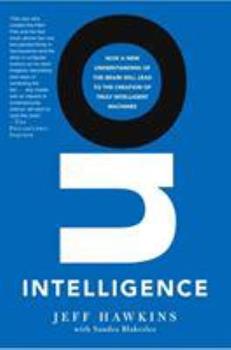 On Intelligence: How a New Understanding of the Brain Will Lead to the Creation of Truly Intelligent Machines

by Jeff Hawkins and Sandra Blakeslee

From the inventor of the PalmPilot comes a new and compelling theory of intelligence, brain function, and the future of intelligent machines Jeff Hawkins, the man who created the PalmPilot, Treo smart phone, and other handheld devices, has reshaped our relationship to computers. Now he stands ready to revolutionize both neuroscience and computing in one stroke, with a new understanding of intelligence itself. Hawkins develops a powerful theory of...

Published by Thriftbooks.com User , 17 years ago
There was plenty of buzz last week about the new company - Numenta - that Jeff Hawkins (inventor of Graffiti and the PalmPilot, Visor, and Treo products) and Donna Dubinsky (CEO of Palm and Handspring) have started. It was coincidental that I was reading Hawkins book - On Intelligence - which describes his theory of intelligence, the working of the brain, and how he thinks it will lead to the creation of truly intelligence machines. I haven't spent any time studying neural science, the brain (my biggest effort was probably not very successfully grinding through the Scientific American issue on Better Brains), or any of the contemporaneous efforts at "next generation Artificial Intelligence" (I was at MIT in the 1980's during the peak of the last wave of AI research and subsequent commercialization attempts - I fondly remember being amazed at Symbolics - they are still around in a new incarnation called Symbolics Technology - Macsyma has been hard to kill off) . So - I don't know much about brain research, theories of intelligence, the biology behind it, or much of anything else. As a result, I thought On Intelligence was superb. I don't expect that it's right (nor does Hawkins) - he's clear that it's a framework and work in process (as it should be). I found it extremely accessible, very provocative, and mostly internally consistent (which is important whenever you are trying to learn about something you know very little about - it can be wrong, but at least it hangs together in a way you can understand it.) The book and theory is based on the work being done at the Redwood Neuroscience Institute, of which Hawkins is the founder and director. Beyond just doing research, part of RNI's mission is to "encourage people to enter and pursue this field of research." Hawkins is consistent in his message in the epilogue of his book where he says "I am suggesting we now have a new more promising path to follow. If you are in high school or college and this book makes you want to work on this technology, to build the first truly intelligent machines, to help start an industry, I encourage you to do so. Make it happen. One of the tricks of entrepreneurial success is that you must jump head first into a new field before it is one hundred percent clear you can be successful. Timing is important. If you jump too early, you struggle. If you wait until the uncertainty lifts, it's too late. I strongly believe that now is the time to start designing and building cortical-like memory systems. This field will be immensely important both scientifically and commercially. The Intels and Microsofts of a new industry built on hierarchical memories will be started sometime within the next ten years. It is challenging doing new things, but it is always worth trying. I hope you will join me, along with others who take up the challenge, to create one of the greatest technologies the world has ever seen." Hawkins thoughts and writing are fused with his obvio

A Great Intro to Even Greater Insights

Published by Thriftbooks.com User , 17 years ago
The accolades previous reviewers have lavished upon this book are all fully deserved. It is not, however, "the first time all these bits and pieces have been put into a coherent framework". The work of Stephen Grossberg explored all of these themes in the 1970s. Unfortunately Grossberg expressed his key insights in systems of differential difference equations that few could understand and fewer still could build upon or contribute to. To his credit, Hawkins does cite Grossberg approvingly at several junctures in his argument, but he fails to take into account several of Grossberg's greatest insights into neocortical processing: his theory of how serial processing can be accomplised in a parallel anatomy and his theory of "rebounds". The latter is especially important since it explains how new memories are prevented from overwriting old memories. For example, when I learn a second language, it doesn't overwrite my first. These criticisms, however, are in no way meant to detract in the slightest from Hawkins' superb book. It is an eminently readable account of neocortical computing, and correct in all its broad brush strokes. If you are as beguiled by "On Intelligence" as the other reviewers in this thread, my purpose is only to alert you to the even deeper wonders that are to be found in Grossberg's work. As I have said, his work is difficult, but his 1980 and 1982 Psychological Review articles will provide good entry-points. Those of you with an interest in brain and language will find an even better second course in neocortical computing in Loritz' "How the Brain Evolved Language" (Oxford University Press, 1999).

Shows the way ahead...

Published by Thriftbooks.com User , 17 years ago
I am a neurosurgeon and I picked up this book with a great deal of scepticism because in the past, neither through my professional studies nor through reading many popular books, have I really been able to answer some fundamental questions regarding our brain. Questions like how do we think? what is imagination? what happens during the so called "a-ha" phenomenon, when you suddenly understand something that you did not a moment ago and many other such questions have been plaguing me for years. And believe me, there arent many satisfactory answers floating around. Hawkins has made a fantastic contribution by giving us A model to think about these questions. His memory-prediction paradigm is very attractive intuitively because it automatically explaines so many facts about our brains and their evolution that other theories just ignored. But even when tested in hard scientific experiments, I predict that the basic structure of his arguement will remain intact, though details may differ. We still do not know a lot about the architecture of the brain, the way neurons are connected to each other and the way brains develop their enormous computive capabilities. As we learn more, it is likely that Hawkins paradigm will be refined, but in the long run, we will owe Hawkins gratitude for allowing our brains to understand how our brains work!!

Loved the book, holes in the theory

Published by Thriftbooks.com User , 17 years ago
RECOMMENDATION: =============== This is one of the few books to posit a theory of human and general intelligence, and the only book of the few that is clear and well written. I think it is seminal will re-ignite interest and activity in building intelligent machines. A pleasant interesting read even for those not working in the field. COMMENT ON CONSCIOUSNESS: ========================== In one sense, this is a side issue since one can probably build intelligent cars, vacuum cleaners and search agents without consciousness, but in another sense it's a crucial aspect of our experience. Hawkins claims that consciousness is just what it "feels" like to have a cortex. I differ. My guess builds precisely on Hawkins suggestion that the cortex is a generative (my word, his is associative completion) hierarchy. That is, we synthesize/simulate the external world inside our head. But, we're a social creature and place a lot of value, evolutionary and otherwise on being able to imagine/simulate the mental state of other people ("my boss will be angry if I do that", "she likes me", ...). Yet, as a mater of simple functioning, we must also simulate ourselves in the world to know how to act. In my mental world, I simulate myself when I consider whether I can squeeze through a gate or lift a weight. When our simulation of mental state became grafted to our simulation of self, I think consciousness came about as an epiphenomena - consciousness is our simulation of our selves, of our own internal state. ONCE YOU GET THROUGH CHAPTER 6: =============================== Some holes which might exist either in my brain or in Jeff Hawkin's theory: ATTENTION: P-173 Attention gets pretty short shrift in the presented theory down to an alternative, hierarchy bypassing pathway in the Thalamus that gets turned on by higher regions if unexpected events occur bellow or the higher region is directed externally - the last is somewhat circular reasoning: attention is turned on if attention is directed. John Reynolds at Salk has been studying visual attention in monkeys and is finding evidence of boosting or diminution of contrast is what visual attention is doing so that visual items win or loose the inhibitory competition between features and that this is perhaps what lets some items rise up to conscious notice. Attention is fairly sequential and substantially bottlenecked for what it can process (see "change blindness" illusions http://viscog.beckman.uiuc.edu/djs_lab/demos.html ). In many of these illusions, you don't notice when huge portions of the visual scene change, items appear or disappear etc. CEASLESS RECODING OF MEMORY: Hebian learning is great, except that it also unlearns equally well. I quote Grossberg's term for the problem in caps above. Memory needs some kind of gating mechanism or it will rapidly turn into mud. Either memory is unidirectional (connections start out high and only shrink, or starts out low and only grows), and/or there is

Published by Thriftbooks.com User , 17 years ago
It is not very often that you encounter a book that alters, not simply what you think, but how you look at the world. On Intelligence is such a book. Jeff Hawkins develops a perspective on intelligence that makes sense of much of what I have discovered about learning over the past twenty years. His focus is on a unified model of how the cortex works, but in truth you do not need to have deep interest in neurobiology to see the power of the model. The book is very clear and readable, something I have learned to associate with Sandra Blakeslee's deft touch (see, for example, Phantoms In the Brain, by Ramachandran and Blakeslee). The heavy lifting occurs in the lengthy sixth chapter, "How the Cortex Works." You might want to skim this chapter or even omit it entirely on your first reading. It is well written, but requires a very thoughtful reading. The model Hawkins develops in this chapter underpins his view of intelligence, but it is not necessary to grasp the details to appreciate the power of the vision. If you have the slightest interest in the role of the brain in making us who we are, you owe it to yourself to read this book. I couldn't recommend it more highly.
Trustpilot
Copyright © 2022 Thriftbooks.com Terms of Use | Privacy Policy | Do Not Sell or Share My Personal Information | Accessibility Statement
ThriftBooks® and the ThriftBooks® logo are registered trademarks of Thrift Books Global, LLC