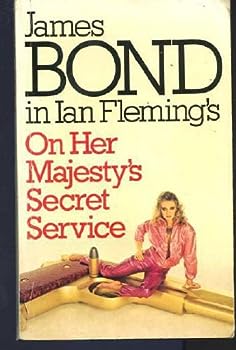 On Her Majesty's Secret Service

This description may be from another edition of this product. In the aftermath of Operation Thunderball, Ernst Stavro Blofeld's trail has gone cold--and so has 007's love for his job. The only thing that can rekindle his passion is Contessa Teresa "Tracy" di...

One of Ian Fleming's best books

Published by Thriftbooks.com User , 17 years ago
If James Bond could do well in the big screen he certainly does in this novel by Ian Fleming. Fleming brings his entertaining writing into a realistic novel. I love this book. It brings excitement, suspense, romance, a little novelty and the shocking climax is Fleming's best ending in a 007 novel. The beginning of the book has Bond rescuing a suicidal woman from a beach. Bond at this point of his spy career is bad. He wants a discharge from the service in order to possibly start a family. In the meantime he meets the same woman at a French casino where he saves her at the table. Her name is Tracy, a spoiled and hard-nosed girl who is exactly a contessa and daughter of a crime boss. Later on the story takes a sudden turn. Tracy's father, Marc-Ange offers Bond a proposition. He would give Bond vital information about the whereabouts of the evil Blofeld if Bond would marry his daughter. Bond is hesitant. He actually likes her but refuses the deal. Bond thinks it over. Bond doesn't want to miss the chance of apprending Blofeld, so he agrees to court Tracy, but not to marry her. Bond receives Blofeld's wherabouts in the mountaintops of Switzerland. He assumes the alias of Sir Hillary Gray, a genealogist, in order to infultraite Blofeld's "medical clinic" who specializes at curing people's allergies. Surprisingly, when Bond gets there, the place is guarded like a fort and the attendants are all woman. Bond uses his charm to woo the ladies in order to learn Blofeld's evil plan. Bond's investigation soon goes out of control and becomes a target of Blofeld and his goons. He escapes the dangerous mountaintops of the Swiss Alps and reunites with Tracy. The story then turns into a chase and Bond & Tracy must survive, along with their passisonate love for each other. I won't reveal the rest of the plot along with the surprising ending because I want you readers to read this fantastic novel. Ian Fleming is an amazing author. Oh by the way the movie is just as good as the book. Bye.

Published by Thriftbooks.com User , 19 years ago
One of the last of the original Bond Books, On Her Majesty's Secret Service is also one of the best. Picking up a year after the end of Thunderball, this book finds James Bond again battling the nefarious schemes of Ernest Stavro Blofeld and SPECTRE and, most importantly, falling in love with the beautiful, resourceful, and ultimately tragic Tracy. Though the usual intrigue is well-presented by Fleming, he also makes it clear that Blofeld's plan is hardly meant to be taken all that seriously. (Without ruining it for those who might never have read the book or seen the surprisingly faithful film adaption, it all comes down to Blofeld hidden away in Switzerland, pretending to be an allergist, and brainwashing English farm girls. No, it doesn't make a lot of sense but Fleming obviously had so much fun presenting it that most readers won't take offense.) The heart of this book -- and this Fleming treats with an admirable seriousness that should take his critics by surprise -- is the love story between Bond and Tracy. In Tracy, Fleming has created perhaps his most fully realized "Bond girl." Vulnerable yet resourseful and more than capable of taking care of herself (and, at times, perhaps even more so than Bond himself), its hard not to fall in love with this character and when Bond finally does decide to reject all others for her, its impossible to disagree with his logic. Its a compelling, rather touching love story and, even though most Bond films know how its going to end, the ending still packs a heavy impact. As for Bond himself, after being a rather predictable presence in Thunderball, he's back in full form as a full realized, interesting character in this novel. On Her Majesty's Secret Service was written after the release of Dr. No (Ursula Andress even makes a cameo appearance at the time) and one can sense that, with this book, Fleming is reestablishing his claim on the character. From the intentionally ludicrous evil scheme to the frequent excursions into Bond's head (revealing him hardly to be the ruthless, unflappable killer that filmgoers though him to be), Fleming comes across as a reenergized writer in this book -- determind to let all the new Bond fans out there know who is really in charge of their favorite secret agent's destiny. The result is one of the best of the original Bond books and one of the best spy thrillers I've read in a long time.

Close to From Russia With Love

Published by Thriftbooks.com User , 21 years ago
Very good. This was a fun read. One of the best books that I have read, but not as good as From Russia With Love. The book was very exciting and had a great ending. Definitly one of Fleming's best.

The Best of the Bonds!

Published by Thriftbooks.com User , 21 years ago
Years ago a friend had told me that "On Her Majesty's Secret Service" was one of his favorite movies, not because he preferred George Lazenby over Sean Connery, but rather because the movie was so much like the book! I read the book and I'm inclined to agree with him.It's the second novel by Fleming to feature arch villain Ernst Stavro Blofeld of the Special Executive for Counter Intelligence, Espionage, Revenge, Terror, and Extortion (SPECTRE). Just like "THUNDERBALL", Blofeld's got a clandestine scheme in the works that could ruin Great Britain and make him a rich, rich man. The British secret service has their best man on the case and 007 is going to have to rely on his sharp wits and resourcefulness if he's going to foil SPECTRE's plans.Of all the James Bond novels I've read, this one ranks as the best of the best! Nobody does it better than Ian Fleming. 5 STARS!

Published by Thriftbooks.com User , 22 years ago
James Bond at his best. Following the last novel, Thunderball, 007 is tracking down the leader of the organization known as SPECTRE, which was behind the trouble in Thunderball. Ernst Stavro Blofeld is an excellent villian; intellegent, resourceful, and very menacing. The action is intense and it builds up to a memorable climax, and the ending is one that I will never forget. Likeable characters like Marc-Ange Draco and lovable heroine Tracy make this book the best novel I have read in a long time. JAMES BOND IS 007. The movie isn't all too bad either, it is very close to the book (surprisingly).

On Her Majesty's Secret Service Mentions in Our Blog 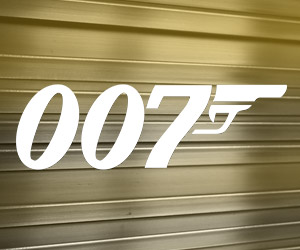