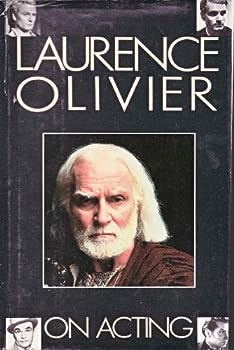 A guide to acting by one of the most celebrated English actors of the century, drawing on his extensive experience in stage and film acting. This description may be from another edition of this product.

Published by Thriftbooks.com User , 13 years ago
This final book by Sir Laurence, generally acknowledged as the greatest actor of the 20th century, is equal parts memoir and acting instruction. Written only three years before his death in 1989, it provides a unique look into the acting profession on stage and screen by one who was in the middle of it from the 1920s onward. Alongside ideas about character development and stage makeup are reminiscences about other greats: Gielgud, Richardson, Wyler, Barrymore, Welles, and many more. I highly enjoyed this book and am grateful the author chose to record both his advice and memories before leaving us to return to the warm stage lights in the sky.

Great Advice From The Master Of The Bard. Recommended Reading.

Published by Thriftbooks.com User , 16 years ago
Sir Laurence Olivier offers advice for all aspiring actors. Written in 1984, five years before his death, the Master looks back on his 60 year career, dwelling mostly on the roles which made him famous: Hamlet, Macbeth, Henry V, Richard III, Othello, Shylock, Antony and Caesar. In his introduction to "The Great Shakespearean Roles," he talks at length about Shakespeare and how "I wish to God I could have met him, talked to him-but most of all, listened." I agree wholeheartedly with him. I recommend this book to anyone who wishes to be an actor, director, writer and producer, like Kenneth Branagh is...and damn good he is too (please see my reviews on their excellent Shakespeare films). Rated G.

This should be on every actor's bookshelf...

Published by Thriftbooks.com User , 19 years ago
O.k., so I began reading "On Acting" by Laurence Olivier for a terribly silly reason: he's dreamy. By the end of the book, though, I realized that he was much more than just a pretty face: he was a voice, a mind, a legend, a human. This book is essential for the actor who wishes to delve deeper into his/her craft. Sir Laurence writes with clarity and conviction, and at times it's as if he's speaking the words right to YOU. This book allows you to peer behind the performance of many of Sir Laurence's favorite characters: Richard III, Henry V, Shylock...and if you've ever had the privalege to play Hamlet, this book brings to life all of the emotions the actor feels before, during, and after "Hamlet". I could go on forever about how great this book is. It's amazing.
Trustpilot
Copyright © 2022 Thriftbooks.com Terms of Use | Privacy Policy | Do Not Sell or Share My Personal Information | Accessibility Statement
ThriftBooks® and the ThriftBooks® logo are registered trademarks of Thrift Books Global, LLC