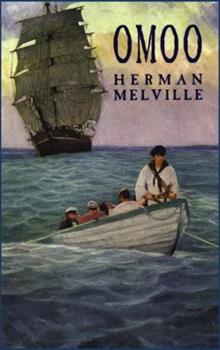 A failed mutiny lands the narrator in a Tahitian jail where he and his companion, Doctor Long Ghost, are treated with curiosity and kindness. After their eventual release, the two embark on a series of adventures as they work at odd jobs, view traditional rites and customs on the island, and contrive an audience with the Tahitian queen. Thought-provoking, humorous glimpses of a vanished 19th-century world in the South Seas by one of America's greatest...

Not quite a portrait of the artist as a young man

Published by Thriftbooks.com User , 13 years ago
I am approaching the writer Melville with little prior knowledge about the man Melville. Apart from the Whale, read 30 years ago, I knew only Typee before taking up Omoo. Omoo is of course a sequel to Typee. While Typee's core theme is the narrator's life in captivity among an intact tribe of 'savages' in the Marquesas, Omoo continues his adventures as an island hopper, a sailor involved in a mutiny, a jailbird, a farm worker... All is told with a light hand, in short chapters. Interspersed are thoughts about colonialism and missionaries and about the fate of the native population of the islands. There is lots of ethnology on mainly two exotic tribes: the population of the whaling ships, and the people who live on Tahiti. The attacks on the missionaries seem to have been toned down a bit in view of criticisms at home. The sequel was less well received than the first book. What strikes me as curious about Omoo is the extent to which the author hides behind a mocking and sometimes self-ironic tone. He is not much given to reflections about himself, or at least not to sharing those with us. What do we conclude about the character of the hero? Obviously he has some problems integrating in his various social environments. He is always the outsider. He runs from his first ship, is an exotic guest in Typee, runs away, joins half-heartedly in a mutiny on his second ship, stays apart from the jail crowd and 'walks away' from prison, doesn't like the work on the potato farm, escapes from some unclear danger in the next village... Would one extrapolate so far, does it seem likely that he will succeed in settling down to any longer term project? He seems unsteady and shallow, aloof without much depth to offer. The story itself is fairly simple, the author does not appear to have a message above the adventure narration and a few rather superficial thoughts on the evils of civilization. In other words, one hopes he will grow up some time. Let's see.

Beginning Melville - a charming start to a literary career.

Published by Thriftbooks.com User , 16 years ago
The word that keeps coming to mind as I think about this book is "charming". Melville was in a good mood when he wrote "Omoo", no doubt enjoyed looking back on a very pleasurable period of his still-young life. While it is true that "Omoo" wasn't nearly as successful as "Typee" had been, it is still an impressive work for a young man in his mid-twenties. I enjoyed his portraits of the people he meets, and especially of his doctor friend, "Long Ghost". His descriptions of Polynesian life and the historical context are quite interesting. And it's funny: Melville had very good sense of humor, displays it throughout "Omoo". While the book is mainly a picaresque story of adventure, recounting the details of daily life in an exotic setting, and is a much happier book than "Typee", there are a few scenes that preview Melville's later narrative power. Here is the "Julia" in a tropical Pacific gale: "Under such a press of canvas, and with the heavy sea running, the barque, diving her bows under, now and then shipped green glassy waves, which, breaking over the head-rails, fairly deluged that part of the the ship, and washed clear aft." And here is a glimpse of the brooding quality of his later work: "But my meditations were soon interrupted by a gray, spectral shadow cast over the heaving billows. It was the dawn, soon followed by the first rays of the morning. They flashed into view at one end of the arched night, like - to compare great things with small - the gleamings of Guy Fawkes's lantern in the vaults of the Parliament House. Before long, what seemed a live ember rested for a moment on the rim of the ocean, and at last the blood-red sun stood full and round in the level East, and the long sea-day began." But these are very isolated examples. By and large, "Omoo" is a great contrast with Melville's other books. It is a light, easy, and amusing read. Highly recommended for Melville fans. Helpful critical works on Melville: Newton Arvin - "Herman Melville" D.H. Lawrence -"Studies in Classic American Literature". F.O. Matthiessen - "American Renaissance" Note: This particular edition is from the Northwestern-Newberry Edition of Melville's works, and is an MLA Approved Text. As such, it is authoritative, but it lacks an explanatory introduction, which may be a slight drawback.
Copyright © 2020 Thriftbooks.com Terms of Use | Privacy Policy | Do Not Sell My Personal Information | Accessibility Statement
ThriftBooks® and the ThriftBooks® logo are registered trademarks of Thrift Books Global, LLC