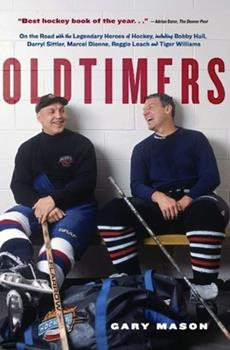 Oldtimers: On the Road with the Legendary Heroes of Hockey, Including Bobby Hull, Darryl Sittler, Marcel Dionne

Every year, a team of ex-NHLers, including such greats as Bobby Hull, Tiger Williams, and Frank Mahovlich, travels around Canada playing hockey and raising money for charity. Known as the NHL Oldtimers or Legendary Heroes of Hockey, they get the kind of attention that Mario Lemieux and Paul Kariya get today, playing to sellout crowds in Calgary, Edmonton, and Winnipeg. In "Oldtimers," award-winning sports columnist Gary Mason takes us on a rollicking...

Published by Thriftbooks.com User , 13 years ago
This is an undiscovered gem, not only a great hockey book but a very human book filled with laughter, sentimentality and even a little sadness. It's a great read......period. It's the behind-the-scenes story of the 2001 Legendary Heroes Of Hockey trip across Canada. Gary Mason is a newspaper writer who accompanied this tour on two of its four week-long sessions. In the book, he talks about the games and strange little towns the tour visits. Mostly, though, he relates what these "old-timers" do best: tell great stories. In this book, you get a bunch of fantastic lockerroom stories the players loved to tell and you get honest portraits of some of these great hockey players, from the controversial outgoing Tiger Williams, to the reclusive Marcel Dionne. Also Wayne Babych, Gary Nylund, Bobby Hull, Paul Reinhart, Jimmy Mann, Johnny Bower, Darryl Sittler, Gilbert Perreault and others spin yarns, sing songs, pull gags, pour down the beer and......yes, show they can still play great hockey in their "old" age. All of the players reveal sides to them you may not know. All of them are articulate, funny, reflective men - a far cry from the semi-illiterate, goon-image many people may unfairly have of hockey players. They are the opposite, as Mason illustrates here in this extremely entertaining book. You'll have a new respect for NHL players. These players are a dwindling breed: former pro stars who play mainly for the love of the sport and want to give something back to the fans who not only remember them but still revere them across Canada. These players didn't wear helmets and masks in their day and so their faces are as familiar to Canadians as baseball stars are to Americans. From small rinks in the middle of nowhere to big arenas, Mason makes us feel we are tagging along with the gang, enjoying the good times. There are tons of pranks (players just love pulling `em) and just good-natured camaraderie along the way. In the end, though, I found this a very touching book. This is one of those rare books that made me sad when it was over. I hope Mason does this again with a couple of other groups because this was excellent reporting and reading. It's a very quick read.

Published by Thriftbooks.com User , 19 years ago
A very nice book on the little told world of oldtimer hockey tours.There is one scene in the book, where the oldtimers play a gag on an unsuspecting rock singer on one of the teams that night, that is hysterical.Overall, very worthwhile for hard-core hockey fans.
Trustpilot
Copyright © 2022 Thriftbooks.com Terms of Use | Privacy Policy | Do Not Sell or Share My Personal Information | Accessibility Statement
ThriftBooks® and the ThriftBooks® logo are registered trademarks of Thrift Books Global, LLC