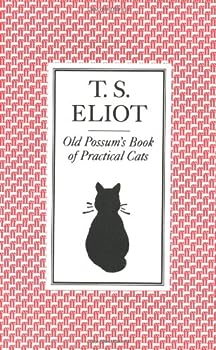 This description may be from another edition of this product. The inspiration for Andrew Lloyd Webber's iconic musical CATS, and its upcoming movie adaptation, directed by Tom Hooper and starring Taylor Swift (Bombalurina), Idris Elba (Macavity the Mystery Cat),...

Published by Rebecca , 2 years ago
Got this book after seeing the musical Cats. It's a great book for reading aloud to children.

Published by Thriftbooks.com User , 11 years ago
T.S. Eliot's fine cat poems appear in a gorgeous, illustrated new edition from Axel Scheffler, a fine children's book illustrator, and makes for an excellent library acquisition or gift idea for all ages. Celebrations of cats odd and ordinary are presented in Eliot's unique verse and benefit from Scheffler's whimsical, fun color drawings throughout. Perfect for read-aloud, family reading, and libraries alike.

Naming a cat is a labor of love

Published by Thriftbooks.com User , 16 years ago
I read this collection because I found it in a book of collected poems, etc. I was really interested in "Murder in the Cathedral." Well, I read this collection of poems regarding cats with great interest. Partly because I do like cats, and also because I am of English descent. T.S. has his English cats down to a "T". Naming them is great fun and his cat names are GREAT. His desciption of their behaviour and antics pretty much lets you know he has been introduced to many a cat in his day. These cats almost come off the page and play with you, they are so true to life. Read this collection if you love cats and want a few moments of private recollection. No doubt you will recognize a cat you have known or are getting to know.

Published by Thriftbooks.com User , 17 years ago
Based on works such as the poems "Prufrock" (1917) and "Ash Wednesday" (1930) and the drama "Murder in the Cathedral" (1935), American-born and naturalized British poet and future Nobel laureate T(homas) S(tearns) Eliot - also founder and editor of the literary journal "Criterion" - was already an established writer when, in 1939, he came up with this series of poems for children, which due to their timeless charm and humorous insight into the feline nature had long become literary classics for the young and old alike before Trevor Nunn and Andrew Lloyd Webber used them as a basis for their award-winning musical "Cats." My favorite rendition of these poems, which were originally a gift from "Old Possum" Eliot to his godchildren, is the 1983 recording featuring Sir John Gielgud and his recurrent stage partner Irene Worth, who alternatingly read the poems and bring to life the likes of Jennyanydots the old Gumbie Cat (who at night displays a show of unexpected zeal in training mice and cockroaches in the art of keeping a clean house), the old "bravo cat" Growltiger (who, already having lost one eye and one ear in battle, one balmy night has "no eye or ear for aught but [the lady] Griddlebone," thus at last making himself vulnerable to his many enemies and "forced to walk the plank"), Rum Tum Tugger, the "curious cat," who very much has a mind of his own and always seems to want exactly the opposite of what you have given him ("For he will do as he do do, and there's no doing anything about it"), and Macavity, "the Napoleon of crime," who controls even notorious scoundrels like Mungojerrie and who is fatefully remeniscient of Berthold Brecht's Mac the Knife in rhyme, metre, name and character. Sir John Gielgud and Irene Worth bring not only their entire impeccable theatrical training to the project but, more importantly, a great sense of humor and a true feeling for the nature of each feline protagonist - and for their canine adversaries; because, as nobody can seriously doubt any longer by the time when we have reached the last poem, "a cat is not a dog!" So you truly hear that Chinese vase go "bing!" when Irene Worth tells the story of the eternal pranksters Mungojerrie and Rumpleteazer; you see them turning the basement into a "field of war," and you hear the cook's desperation when she has to inform the family that there will be no meat for dinner because "the joint has gone from the oven - like that!" You can picture Old Deuteronomy sleeping or sitting in the sun, and see his slow, ponderous movements as you hear John Gielgud's rendition of the oldest village inhabitant's ever-unchanging comment: "Well, of all ... things ... Can it be ... really! ... No! ... Yes! ... Ho! hi! Oh, my eye!" Reading about "the Awful Battle of the Pekes and the Pollicles," Irene Worth does not merely give you the dogs' various kinds of bark; true to character she moreover endows them with their respective Pekinese, Yorkshire and Scottish accents. Similarly, h

Published by Thriftbooks.com User , 21 years ago
The poetry - well, there are many editions of the work the Andrew Lloyd-Webber made the most famous of Eliot's books. Gorey's illustrations bring the poems to life in a whole new way. This is a book for any collector, and a great introduction to one of the world's greatest illustrators.

Published by Thriftbooks.com User , 24 years ago
This is a funny, interesting poem book. I got it right after I saw Cats the play. I suggest you get this book.

Old Possum's Book of Practical Cats Mentions in Our Blog

Broadway is back! This month, iconic hit musicals like The Lion King, Moulin Rouge, Hamilton, and Wicked are taking to the stage in a massive Broadway revival! But not all of us can make it to NYC right away, so here are a few ways to experience musical joy in the meantime. 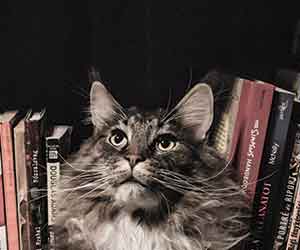 If the cat found buried with a human on the Mediterranean island of Cyprus is any indicator, humans have been fascinated by, obsessed with, and affectionately herding cats as pets for 9500 years. Cats started showing up in cave art around 1950 BC, so it's safe to say that humans and felines go way, waaay back.