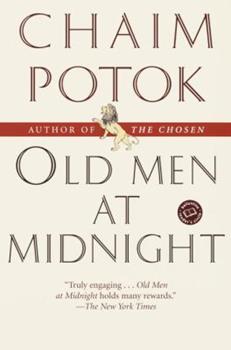 From the celebrated author of The Chosen and My Name Is Asher Lev , a trilogy of related novellas about a woman whose life touches three very different men--stories that encompass some of the profoundest themes of the twentieth century. Ilana Davita Dinn is the listener to whom three men relate their lives. As a young girl, she offers English lessons to a teenage survivor of the camps. In "The Ark Builder," he shares with her the story of his friendship...

Published by Thriftbooks.com User , 18 years ago
Midnight is asociated with journeys trough tough-hard times. The Old age of a person is asociated with a time where physical strenght is not greater than personal determination, values and beleif. Being old at midnight is a crude task, specially when overwhelming powerful forces are oppressing goodwill people. Trough the eyes of a woman along three diffrent stages of her life and from the lips of a teenager surviavor of the holocaust, the voice of a former secret soviet serviceman and from the recalls of an historian, Chaim Potok has given us a brilliant treaty of those who rather face destiny with dignity and integrity, even when that mean a certain death in body, but to live far beyond to stick to goodwill values. A superlative book about an archbuider, a righfull physician and a prophesor of Torah, all they share in common trhe love for life and the gust to face destny and to fight any form of overwhelming oppresion. Ileana Davita carries on a message of integrity and inspiration. This is a must!

This is the midnight...

Published by Thriftbooks.com User , 18 years ago
An Outstanding perspective of courage and integrity!Midnight is asociated with hard-tough times and jorneys of our lives, where uncertaninty is the only location...journeys where we need to gather of all courage and dignity. So midnight is a time where interior light is the most important tool to keep goodwill going. Midnight means repression, terror coming from the side of the cruel and strong, the merciless, the rulers by overwhelming force.Old age is a time when we have to gather all our forces to face the greatest dilemmas of life. The old man is like the young lion: he knows when and how to fight, but sometimes phisical strenght has beeb left behind, so Old Men needs to be brave to face destiny, oppression and racism.The poem of Rudyard Kippling "The Storm Cone" (1932) illustrate this point: "This is the midnight, let no star delude us, dawn is very far, this is the tempest long foretold, slow to make head, but sure to hold". Still and however, as Jorge Luis Borges wrote: "the past is indestructible and sooner or later comes back...and we need people to recall, to fight the power of the overwhelming leeders, the merciless, the opressors, the racists, the butchers.Chaim Potok is a clever and brilliant author who has given us three different stories seen from the magic perspective of Ileana Davita: the narration of a young survivor of the horror of Holocaust, the vision a secret serviceman who lives the opresion under Stalin and the vision of a veteran Chronist of War and Geopolitics, on the matter of the phantoms of the nightmare of war, as a major disgrace. This is the kind of Book that you are going to talk with your friends. Do not miss it.

Published by Thriftbooks.com User , 19 years ago
As always, Chaim Potok is the master of storytelling. The three novellas are connected through Davita (of "Davita's Harp). The "Ark Builder" is a sensational story that captures the emotions of a young survivor of the Holocaust. The second story concerns an ex-KGB officer and professional tormentor whose position was to extract confessions from people, both the guilty and innocent. Finally, we see a man facing his own mortality and his wife's impending death from AIDs. This is stortelling at its best from the master. Perhaps the best thing about Potok is his ability to write for all ages.

The Master and His Art

Published by Thriftbooks.com User , 19 years ago
To read the words of Chaim Potok is to be in the company of true greatness. "Old Men at Midnight" is no exception. Three beautifully crafted novellas with a cameo or more in each by Davita of Potok's splendid novel, "Davita's Harp," that examine the horrors of war and yet do so in a poetic, beautiful manner. A feat only a few authors can accomplish. Every work of Chaim Potok is important. This seems to be especially important now in light of the current world situation.Thank you, Mr. Potok.

Published by Thriftbooks.com User , 19 years ago
This book is made up of three novellas that follow the life of Ilana Davita, who was first introduced as a child in Potok's novel Davita's Harp. Davita's sympathetic and intuitive nature lead her to act as a sort of muse, encouraging several men who have been through unspeakably painful events to artfully express their stories. I'll admit that I love everything Potok writes, but in my opinion this book is great. Perhaps not quite up to the level of The Chosen or My Name is Asher Lev, but certainly as good as The Book of Lights and In the Beginning, and certainly worth buying and reading immediately. Like everything of Potok's, it's a captivating read- I got through it in just over a day and highly recommend it.
Copyright © 2020 Thriftbooks.com Terms of Use | Privacy Policy | Do Not Sell My Personal Information | Accessibility Statement
ThriftBooks® and the ThriftBooks® logo are registered trademarks of Thrift Books Global, LLC