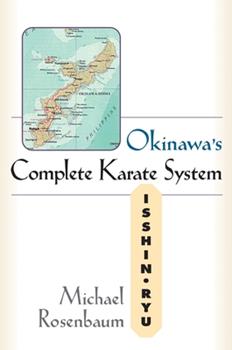 A comprehensive study of the origins and development of one today's most popular fighting systems. This book details essential Isshin Ryu fundamentals, principles, code of ethics (both in the past and in today's society), as well as its internal and external aspects.

A New Look at Isshinryu

Published by Thriftbooks.com User , 18 years ago
The author takes a different route in this book in that he explores Isshninryu not so much from the standard party line of it being the greatest martial art the world has ever known. Instead he sets down before the reader a great overview of the system and its early pioneers, most of whom were Americans, and tells how and why this Karate System evolved without trying to debase any other systems of karate. He does however take a different viewpoint towards the effectivness of modern day sport based systems and is quite quick to point of the differences between Japanese Styles and Okinawan Styles of Karate. There are very few pictures in this book except for the sketches done of famous Isshinryu practitioners however he does a wonderfull job of exploring the body mechanics of the system, its hard and soft elements as well as its internal and external elements all explained in a rather matter of fact viewpoint. Nowhere does he delve into quasi-mystical elements as is so often done in many martial arts books attributing this or that to chi, ki or anyother unseen element. Intead he presents facts to the reader and lets you determine what is real and what isn't. Also he takes the same approach in his presentation fo the system itself. He is however, and rightly so, pretty harsh on modern day ranking it's abuse and the good ole boy politics found within many styles of karate, Isshinryu included. Over all its a good book, not to deep, just to the point and factual.

A very refreshing look at Isshinryu

Published by Thriftbooks.com User , 20 years ago
As an Okinawan Karate practitioner with over 20 years experience, (most of it in Isshinryu) I find this work very detailed in its history of the system. The author gives credit to many of the early Isshinryu pioneers that have not been made mention of in previous works like Don Bohan, and others who did much to futher Isshinryu but have recieved little or no written credit. The author also delves into other aspects which have previously not been covered like the hard/soft aspects of this system and the various roles of kata in training. His exploration of the political infighting that abounds in this system is bound to have some very unkind comments sent his way, but he should be given credit for casting light on this "skeleton in the closet" anyway. This is far from being a how to book, its true value is its historical approach, and insightfullness into the system. I highly recommend it.

The path to the way

Published by Thriftbooks.com User , 20 years ago
This is an easy to follow history on the roots of modern day karate and kobudo as well as a detailed description of the past and present influences and aspects of the Isshin Ryu system.He shows a clear understanding of the distinction between practicing karate as a sport and as a way of life. There were many times that questions would arise (what does he mean, how does he justify that) only to have them answered by the next page. Very informative in it's historical detail and very refreshing in it's perspective.

Published by Thriftbooks.com User , 20 years ago
This book is not just for the martial arts expert. It is for those of us who are interested in looking at history,philosophy and a way of life. Once I started reading this book I could not put it down. This book is a must read.

A very insightfull and controversial book

Published by Thriftbooks.com User , 20 years ago
This book provides a very good history of the Okinawan combative arts and the influences upon them. Its true message however is pointing out the pitfalls that have become us today due to over-inflated egos and undeserved promotions. Look out you paper tiger masters and over night black belts this man takes no prisoners. If your doing martial arts for the sake of doing martial arts this book is for you. If it's your ego that motivates you or that next promotion look else where.
Trustpilot
Copyright © 2022 Thriftbooks.com Terms of Use | Privacy Policy | Do Not Sell My Personal Information | Accessibility Statement
ThriftBooks® and the ThriftBooks® logo are registered trademarks of Thrift Books Global, LLC