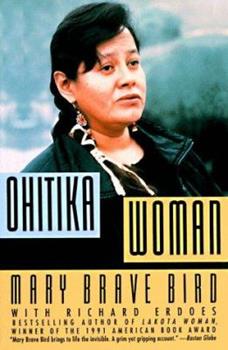 Published by Thriftbooks.com User , 16 years ago
Most history consists of the actions of royalty and people in power. We know the stories about the lives of the pharoahs but not of common laborers. Until now. This book documents the life, not of a chief, but of an ordinary Native American woman. We see how she lives, how she feels, how she thinks, and she is open in expressing her opinions on political issues as well as cultural and social issues. In addition to telling the accounts of her life, the author Mary Brave Bird opens up to allow the reader to see deep into her heart and innermost thoughts. She is very candid not only about her thoughts and feelings but about her actions as well. She does not try to hide her faults and describes her own infidelity and irresponsibility without excuses. While reading the book, one is tempted to judge her. But don't. She must be applauded for being so open and honest. At one point, she assigns blame to the white man for all the ailments of Indian society. Yet remarkably she knows that more handouts from the government or more government programs will not be the answer. The Indians themselves are the only ones who can lift themselves out of poverty, and she is honest in that her own decisions and her own behavior has prevented her and her children from living better lives.

Published by Thriftbooks.com User , 19 years ago
This book is highly readable, but is not a beginning-to-end narrative, so those who pick up the book expecting a simple story will be disappointed. Yes, it is a book of activism, and there is some feminism. Reservation poverty is described in detail. Domestic abuse and alcoholism also appear here. Plus Sun Dance self-torture. Thankfully, many sweat lodge and cedaring-off descriptions dull down the affect of the more shocking parts of Mary Brave Bird's experiences.She falls prey to an alcoholic lifestyle inolving "party-ing" until you're either beat up or in jail. She eventually leaves her husband, Sioux medicine man Leonard Crow Dog, and treks across country (with 4 children), moving from women's shelter to homeless shelter, until they all spend a wild three years in Phoenix.Definitely, the alcoholism mars this narrative, and lowers Mary Brave Bird's credibility. Yes, there are a lot of references to the American Indian Movement's standoff at Wounded Knee. And there's a good chapter about native American traditions with regard to menstruation. And inspiration about fighting for the land.But I can't help wondering if the sort of hopeless drunken revelry portrayed here typifies ALL reservation Indians, and if so, aren't they in fact contributing to the end of their own culture..? Who's watching all those Indian kids while Mom's on a two day drunk? In other words, this is a disturbing book. It's good but scandalous reading.

A gripping, touching account of life on the "rez"

Published by Thriftbooks.com User , 23 years ago
I read Ohitika Woman a few months before I read Lakota Woman; this was the first Native autobiography I ever read. To respond to an earlier review, the book did reiterate things covered in Lakota Woman, but that is neccesary if people read this one first as I did. I spent some time on Rosebud as a volunteer teacher last summer and came to understand to some degree why Mary writes what she does about the rez.

Published by Thriftbooks.com User , 24 years ago
"Ohitika Woman" is a true confession of a life most American Women have never lived. From Wounded Knee to Washington, from rags to riches, from love to heartbreak. Mary Brave Bird talks openly about her life as a proud Lakota woman, who defends the best interest of her people in the best ways she knows how. She talks honestly about life growing up on a poor Indian reservation, and proudly of her time with the American Indian Movement during the seige of Wonded Knee during the massive Red Movement of the 1970's. She is is a remarkably head-strong woman, and has lived her life this way even against incredible odds. What I enjoyed most was her enduring strength and the need to succeed and never give up. For this, she is a true winner, and a true success. A book for all Americans, "Ohitika Woman" has something to teach us all. As a Native Canadian, I greatly admire her overwhelming courage, strength and passion in fighting for what she believes in!

Published by Thriftbooks.com User , 24 years ago
Mary Brave Bird tells the very compelling and dramatic story of her life, growing up as an American Indian woman. This is a life full of non-stop action, from Wounded Knee, to stand-offs in Washington, from rags to riches, from love, to heartbreak. This is a book for all Americans. As a Native Canadian, I understand her strength, her generosity, her courage, her pain. I am most impressed by her overwhelming fighting spirit, and her desperate and never-ending need to finish her work fighting for First Nations people across the continent. Derek Sinclair, aspiring writer
Trustpilot
Copyright © 2022 Thriftbooks.com Terms of Use | Privacy Policy | Do Not Sell My Personal Information | Accessibility Statement
ThriftBooks® and the ThriftBooks® logo are registered trademarks of Thrift Books Global, LLC